Stock-Market-Based Measures of Sectoral Shocks and the Unemployment Rate

Downturns in the construction and finance sectors played a significant role in the recent recession. A stock-market-based measure that captures sectoral shocks shows that these disturbances are important for explaining long-duration unemployment. This is consistent with the intuition that sectoral shocks cause workers to engage in time-consuming moves across industries in their searches for work. It also suggests that it will take a while before the more than 1.8 million unemployed construction workers and close to a half million unemployed finance and insurance workers find jobs.

Recessions can be precipitated by a variety of shocks. The one that began in 1981, for instance, is generally attributed to a tightening of monetary policy as the Federal Reserve attempted to squeeze inflation out of the economy. In the latest recession, developments in the construction and financial sectors seem to have played a significant role. Economists have debated whether shocks to a particular sector might affect the economy differently from an aggregate shock, such as a change in fiscal or monetary policy. This Economic Letter uses a stock-market-based measure to capture sectoral shocks and discusses the role played by these disturbances in explaining recent high unemployment rates.

Lilien (1982) argued that shocks to individual sectors of the economy would require a reallocation of labor across sectors. Since finding a job in a different sector of the economy tends to be time consuming, sectoral shocks push up unemployment. He also showed that a measure of the dispersion of employment across industries was useful in explaining the unemployment rate. This measure was subsequently criticized by Abraham and Katz (1986), who pointed out that aggregate shocks could themselves cause employment in different sectors to grow at different rates. Black (1987) argued that changes in the relative stock market valuation of different sectors should provide information about the unemployment rate. Loungani, Rush, and Tave (1990) followed by constructing a measure based on the dispersion of stock market returns across sectors. They showed that increases in stock market dispersion were followed by increases in the unemployment rate. Brainard and Cutler (1993) proposed a related measure. Loungani and Trehan (1997) showed that the dispersion measure was more important for explaining long-duration unemployment than for explaining short-duration unemployment.

We update this research to cover the latest recession. This approach is of particular interest now because some recent analyses focusing on employment growth rates and related labor market data found little evidence of sectoral reallocation (Valletta and Cleary, 2008, for instance). However, the amount of reallocation observed so far might be an imperfect measure of the sectoral imbalance in the economy. For example, sectoral reallocation might be held down by a widespread reduction in aggregate demand, or by uncertainty and credit-market difficulties that limit the ability or willingness of businesses to expand. Stock prices, being forward looking, can potentially provide a reasonable measure of the adjustments that may take place in the future once these difficulties have been overcome.

The effect on economywide unemployment 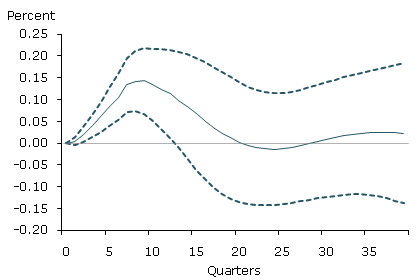 Figure 1 shows how an increase in stock market dispersion affects the long-duration unemployment rate, where long-duration unemployment is defined as a jobless spell in excess of 26 weeks. Dispersion is measured by an index defined as the standard deviation of a set of industry return indexes constructed by Standard & Poor’s (S&P). The response (solid line) in Figure 1 is generated from a statistical model containing the S&P 500 index, real GDP, the federal funds rate, the relevant unemployment rate, and the dispersion index. The model is estimated over the period from the first quarter of 1955 through the first quarter of 2010. We also show two standard error bands (dotted lines). Ninety-five percent of the time the true response lies in the area between these bands. The figure shows that the effect on the long-duration rate builds gradually, peaking after more than two years and not returning to zero for almost five years. Interestingly, the effect of the dispersion index varies with the duration of unemploy-ment. Dispersion becomes less important as we look at shorter durations. The opposite is true for the federal funds rate, which is more important at shorter durations and negligible at longer durations. 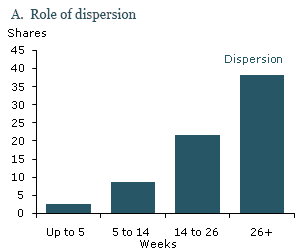 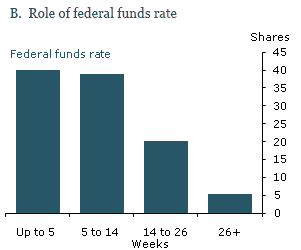 Figure 2 illustrates this point by providing a way to compare the average effect of dispersion shocks and federal funds rate shocks on unemployment of different durations. Technically, it shows how much of the variance of the error in predicting unemployment 20 quarters ahead is due to either of these shocks. The results are intuitively appealing. The first panel shows that dispersion shocks have almost no effect on short-duration unemployment but become more important as duration increases. This is what one would expect of shocks that cause people to move across sectors looking for jobs. The second panel shows that federal funds rate shocks matter more for the shorter durations and have almost no effect on long-duration unemployment. 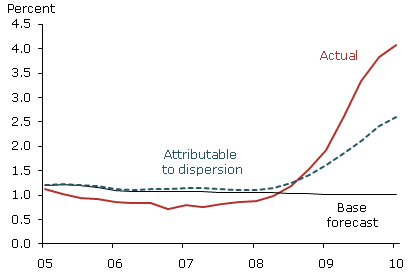 Evidence from a specific sector 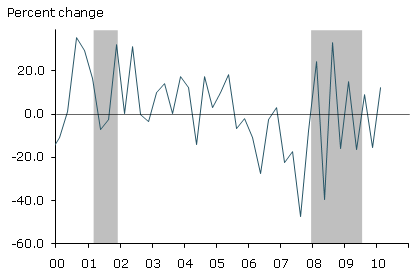 The aggregate analysis carried out so far does not directly link stock market returns in a specific sector to employment outcomes in that sector. It is instructive to look at some evidence regarding the construction sector. Figure 4 shows excess returns in the Standard & Poor’s home building sector since 2000, that is, returns in the homebuilding sector measured relative to the market average. Note that excess returns turn negative around mid-2005 and stay negative until the end of 2007, when the recession begins. 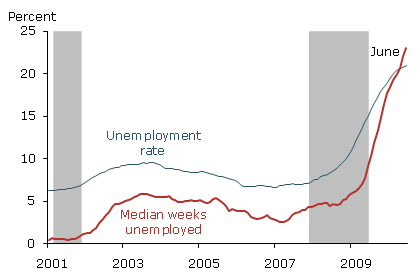 Figure 5 presents unemployment data on the construction sector. (This is a more comprehensive sector than homebuilding, but the closest we can come to it in the unemployment data). The sectoral unemployment rate averaged about 20% over the 12 months ending in June 2010, which is more than twice the aggregate rate. This large difference more than two years after the recession started suggests that the effects on the unemployment rate are likely to be persistent because many workers laid off from this sector have not found jobs elsewhere. We also show the 12-month average of median weeks unemployed, which is rising towards 20 weeks. Note that duration does not begin to increase until 2007, more than a year after returns first turn negative.

The analysis presented here is not meant to argue that sectoral shocks are the main reason behind the high unemployment rate today. Yet the evidence from industries that were hard hit in the latest recession suggests that sectoral considerations are likely to play a significant role in the evolution of the unemployment rate over the next few years. An average of about 1.8 million construction workers was unemployed over the first six months of this year. It appears that many of these workers will have to move across sectors, as it is extremely unlikely that construction, especially homebuilding, will return to levels seen before the crisis. Similarly, it is hard to believe that employment in the finance and insurance sector will return anytime soon to levels seen before the recession began, although this is a smaller sector with an average of less than a half million unemployed in the first six months of the year. How quickly these workers find jobs in other sectors will depend on how fast businesses in other sectors expand hiring. Unfortunately, so far employers seem unwilling or unable to hire at the rates that are required to make an appreciable difference to the unemployed in these sectors.

Puneet Chehal is a research associate at the Federal Reserve Bank of San Francisco.

Prakash Loungani is an advisor in the Research Department at the International Monetary Fund.

Bharat Trehan is a research advisor at the Federal Reserve Bank of San Francisco.