The Breadth of Disinflation

In recent months, inflation as measured by the personal consumption expenditures price index has been trending lower. This slowdown, known as disinflation, has raised concerns that inflation might actually drop below zero and enter a period of deflation. An examination of the distribution of inflation rates across the range of goods and services that compose the index suggests that downward pressures on inflation are relatively high by historical standards.

The personal consumption expenditures price index (PCEPI) is a widely followed measure of U.S. inflation based on personal income data published by the Commerce Department’s Bureau of Economic Analysis. Over the past 12 months, the prices of consumer goods and services measured by the PCEPI have increased 1.3%. This is a relatively low level of headline inflation, but by no means the lowest reading ever recorded. In the 12 months ending July 2009, PCEPI prices declined 1%. Only one year before that, in July 2008, 12-month PCEPI inflation reached 4.5%, its peak for the decade. These big swings are in large part attributable to volatile food and energy prices. An alternative measure, core PCEPI inflation, excludes food and energy prices. It now stands at 0.9% and has declined relatively steadily since the summer of 2008.

This downward drift in core inflation, together with continued slack in the economy and very low nominal interest rates, has caused the threat of deflation to reappear on the radar screens of many economists (see Bullard 2010, for example). As Federal Reserve Chairman Bernanke (2002) defines it, deflation is “a general decline in prices, with emphasis on the word general.” At any point in time, the prices of some goods increase while others decline. For example, medical care prices and college tuition tend to increase every year, while computers and other electronics tend to become cheaper. Deflation refers to the case in which the majority of prices fall, pulling measures of the overall inflation rate below zero.

Inflation measures such as headline and core PCEPI capture the central tendency of all or a subset of prices, meaning that, amid constant price movements in different directions, they summarize the overall trend. So do certain alternative measures, such as the median inflation rate published monthly by the Federal Reserve Bank of Cleveland (2010) and trimmed mean PCEPI inflation published by the Federal Reserve Bank of Dallas (2010). Such central tendency inflation measures turn negative when there is a general decline in prices, but they do not directly measure the breadth of price declines across the range of goods and services in the economy.

This Economic Letter looks at the extent of price declines and the slowdown in inflation by considering the distribution of inflation rates across goods and services, not just the central tendency. The Letter first examines levels of inflation, focusing on the fraction of expenditures on goods and services for which prices are declining. It then considers the distribution of changes in the inflation rate as a way of measuring how severe the slowdown in inflation is across expenditures. Compared with a simple measure of overall inflation, this approach allows a more direct assessment of the prevalence of deflationary and disinflationary pressures in the economy.

To analyze the distribution of personal consumption expenditures (PCE) inflation rates and the extent of deflationary pressures, we use prices for 51 categories of goods and services that cover all expenditures by U.S. consumers. Each of the expenditure categories is weighted by its share of total spending. 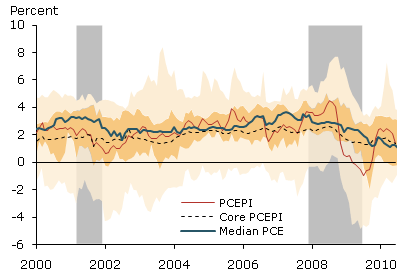 Prices have declined over the past year for goods and services that make up 17% of all consumer spending. Though this might not be a general decline in prices of the type that constitutes deflation, it is evidence that price declines are widespread. Notably, the 25th and 50th percentiles have been at levels comparable to those of the same percentiles in early 2003, when deflation was also a concern. Still, these widespread price declines have not driven overall inflation into negative territory. Even though median PCE inflation is at its lowest level since the early 1960s, it is still greater than zero. The economy is experiencing disinflation, not deflation. Inflation is gradual falling to historically low levels. The question is how broadly based are the price pressures that are driving inflation down. 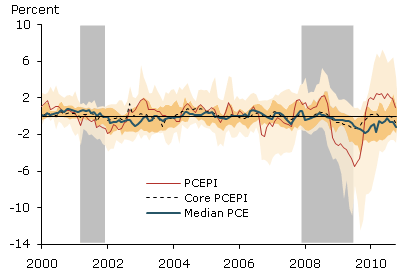 Figure 2 compares current 12-month inflation rates for different goods and services with the inflation rates for those categories one year ago, showing results for the median, and the 10th, 25th, 75th, and 90th percentiles, as well as the 12-month changes in headline and core PCE price inflation. The figure demonstrates that disinflation has been broad. At the beginning of the recession, 34% of expenditure categories were experiencing disinflation. The percentage of expenditure categories experiencing disinflation peaked at 85% near the end of the recession. It has since decreased to its current level of 72%. Hence, almost three-fourths of consumer spending is on goods and services for which inflation is slowing.

While the current share of disinflationary expenditure categories is not unprecedented, the magnitudes of deceleration in inflation are the largest seen since the 1981 recession. The main difference between slowing prices in the early 1980s and current disinflation is that the large deceleration during and after the 1981 recession was due to a severe tightening of monetary policy. This tight policy stance significantly reduced inflation in 1982 and is sometimes called the Volcker deflation after then-Federal Reserve Chairman Paul Volcker (Blanchard 1984). By contrast, the most recent recession was caused by the bursting of the housing bubble and the ensuing financial crisis. Despite exceptionally low interest rates, the breadth of disinflation has remained quite large since the beginning of the last recession. In October 2010, half of consumer spending was on items whose inflation rate had declined 1.2% or more over the past year. Moreover, the current acceleration of headline inflation has been due to the volatile food and energy expenditure categories. Core inflation is currently decelerating.

Bart Hobijn is a senior research advisor at the Federal Reserve Bank of San Francisco.

Colin Gardiner is a research associate at the Federal Reserve Bank of San Francisco.

Additional data on the distribution of PCE inflation rates