Mortgage-Backed Securities: How Important Is “Skin in the Game”?

Financial reform legislation passed by Congress in 2010 requires mortgage originators to retain some loss exposure on the mortgages they securitize. Recent research compares the performance of mortgage-backed securities for different types of issues in which originators retain different degrees of loss exposure. The findings suggest that retention of even modest loss exposure by originators reduces moral hazard and is associated with significantly lower loss rates on these securities.

Many analysts believe that, during the housing boom of the 2000s, the widespread securitization of residential mortgages fundamentally altered the incentives of key players in the loan origination and funding process. A basic problem with the originate-to-distribute model of lending is that mortgage originators and the sponsors of mortgage-backed securities (MBS) have too little “skin in the game,” these critics argue. In contrast to traditional lending, in which vertically integrated lenders own and service the loans they originate, securitization involves different agents performing different services, often for fees that are unrelated to the performance of the securitized mortgage loans. A resulting danger is that originators and sponsors pay too little attention to the riskiness of the mortgages they originate or place into pools they sponsor.

Economists use the term “moral hazard” to refer to the change in incentives that arises when individuals or institutions do not bear the full consequences of or responsibility for their actions. Critics contend that the credit crisis that began in 2007 was a direct result of a decline in lending standards fostered by moral hazard inherent in the originate-to-distribute securitization model. In response to these concerns, Title IX of the Dodd-Frank Wall Street Reform and Consumer Protection Act, the financial reform legislation recently passed by Congress, requires securitizers to retain at least 5% of the credit risk associated with the mortgages underlying residential MBS. In addition, the legislation prohibits securitizers from hedging or transferring that credit risk.

Are these requirements on target? How important is it to have “skin in the game”? To answer these questions, this Economic Letter reviews recent empirical studies on how the severity of moral hazard problems in the securitization process is related to the structure and performance of securitized pools of residential MBS. The Letter addresses three related questions:

Securitization and the originate-to-distribute puzzle

Several recent studies suggest a link between securitization, lending standards, and losses on subprime and Alt-A mortgages. For example, Mian and Sufi (2009) provide evidence that, from 2003 to 2007, securitization was associated with an expansion of the supply of credit to subprime borrowers and that default rates have been significantly higher for securitized mortgages. Specifically, they find that the ease of securitizing subprime mortgages resulted in an unprecedented expansion of the supply of mortgage credit to zip codes with a higher percentage of households with poor credit scores and high latent demand. This occurred despite the lack of significant income growth in these zip codes. Moreover, the authors find that zip codes that experienced the biggest increase in mortgage securitization between 2002 and 2005 also experienced the biggest increase in mortgage default rates from 2005 to 2007, suggesting lax lending standards for securitized mortgages.

Keys et al. (2009) examine a purported rule of thumb in underwriting that makes it much easier to securitize mortgages when borrowers have FICO credit scores above 620. They find that mortgages just above the 620 threshold are much more likely to be securitized than mortgages just below the 620 threshold. They also find that default rates are higher for securitized mortgages with FICO scores just above than for those just below that threshold, suggesting less diligent screening of loans that originators expect to securitize.

Evidence that securitized loans have higher default rates is not in itself an indication that the originate-to-distribute model is flawed. For example, riskier mortgages could be securitized because MBS investors have broader diversification opportunities than the originator and thus may be better positioned to bear the credit risk. Critics of the model contend that securitization promoted lax lending in that MBS investors systematically misunderstood or ignored how securitization affected the incentives of originators and, consequently, the riskiness of the underlying mortgages. In other words, originators gain from lax screening if the values of mortgages they securitize do not include discounts for moral hazard. On the other hand, if MBS prices include moral hazard discounts, then sponsors and originators have an incentive to retain skin in the game as a way of demonstrating higher underwriting standards that earn higher values for securitized mortgages. More generally, pricing of moral hazard includes a “lemon discount,” a markdown based on a presumption of higher risk that reduces gains associated with lax screening by originators.

Gauging the importance of skin in the game

One way to gauge the importance of skin in the game is to examine whether MBS loss rates vary with originator loss exposure. Originator and sponsor loss exposure differs depending on whether the originator is affiliated with the entity that sponsors the securitized pool and/or services the mortgages in the pool. To understand this, it is helpful to review the respective roles of originators, sponsors, and servicers in the securitization process. The originator is responsible for evaluating the potential borrower, underwriting the loan, and extending mortgage credit. Until a loan is sold, the originator provides funding and bears the risk of loss. In a securitization, the originator typically sells a loan without recourse to a stand-alone or bankruptcy-remote special purpose vehicle. Even when a loan is sold without recourse, the originator may retain some loss exposure if there is found to be a breach of sale representations and warranties. After a loan is sold, the special purpose vehicle pools it with other mortgages and issues securities that have claims on the cash flows of the original loans. Securities are sold in tranches that vary in the priority of their claims to cash flows generated by the mortgages.

The sponsor sets underwriting guidelines for mortgages in the pool based on such parameters as FICO scores, required documentation, loan-to-value ratios, amortization schedules, and whether mortgage interest rates are adjustable or fixed. Typically, the sponsor also retains the most junior or residual securitization tranche. This implies that the sponsor has first loss exposure as well as greater upside potential if the pooled mortgages perform better than expected.

MBS vary in the number of originators supplying loans and whether originators are affiliated with sponsors. There are three basic types of deals. In affiliated deals, a single originator also serves as MBS sponsor and servicer. For example, for an MBS issue identified as CWALT 2007-24, subsidiaries of Countrywide Financial Corp. served as the sole originators and sponsors, and also serviced the underlying mortgages. In mixed deals, the sponsor is affiliated with one of several originators. Thus, in CWALT 2006-OC8, Countrywide was the sponsor but just one of several originators. Finally, in unaffiliated deals, the sponsor is not an originator. For example, in Bear Stearns Alt-A Trust 2006-4, Bear Stearns sponsored and underwrote an issue that pooled mortgages originated by Countrywide and at least five other lenders.

When a sponsor is affiliated with a single originator, the originator retains both greater loss exposure and greater upside profit potential than in unaffiliated deals. Also, an originator that expects to retain servicing rights could have greater incentive to screen borrowers carefully, because the value of mortgage servicing rights increases when the expected duration of a mortgage is longer. Moreover, the incentive to free ride on screening carried out by other lenders is likely to be greater when the number of originators is larger. As a result, originator-servicer affiliation and originator dispersion can be used as measures of distance from loss, that is, the degree to which originators have reduced their skin in the game. Moral hazard problems are expected to be greater when distance from loss is greater. 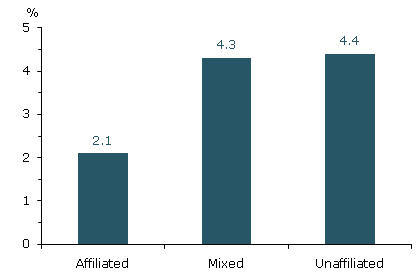 Demiroglu and James (2009) examine the relationship between performance, pricing, and distance from loss for a sample of Alt-A MBS. Alt-A mortgages do not meet the underwriting guidelines of Fannie Mae and Freddie Mac, the principal secondary buyers of mortgages, because of inadequate documentation, high borrower debt relative to income, or high loan-to-value ratios. Demiroglu and James measure performance by calculating the cumulative net loss rate in their sample through August 2009. Cumulative net loss rate is defined as the cumulative loss of principal due to default, net of recoveries, divided by the original pool balance.

Differences in performance based on originator-sponsor affiliation were evident before the 2007 beginning of the housing market collapse. For example, by mid-2006, the loss rate on affiliated deals was 0.28%, roughly one-third the 0.76% loss rate on unaffiliated deals.

Overall, these results suggest significant performance differences based on the loss exposure of the mortgage originator. In short, skin in the game matters for performance. More important, because in this study the residual interest retained by the sponsor is 3% or less of the total value of the securitization, these findings suggest that a 5% loss exposure requirement is likely to have a significant impact on loss rates.

Christopher M. James is a professor of finance at the Warrington College of Business, University of Florida, and a visiting scholar at the Federal Reserve Bank of San Francisco.