Hong Kong and China and the Global Recession

Hong Kong and China are recovering impressively from global recession thanks to effective stimulus programs. But authorities worry that expansionary U.S. monetary policy may fuel asset bubbles in their economies. In the long run, the recession may nudge China toward increased domestic consumption by highlighting the risks of export-driven development. This Letter is adapted from a report by the president and CEO of the Federal Reserve Bank of San Francisco on her visit to Hong Kong and China November 15-21, 2009. Each year, the president of the San Francisco Fed joins the Federal Reserve governor responsible for liaison with Asia on a fact-finding trip to the region, in keeping with the Bank’s objective of developing expertise on issues related to the Pacific Basin.

The recovery has been facilitated by expansionary monetary and fiscal policies in Hong Kong and by China’s robust recovery. For all practical purposes, Hong Kong delegated the determination of its monetary policy to the Federal Reserve through its unilateral decision in 1983 to peg the Hong Kong dollar to the U.S. dollar in an arrangement known as a currency board. As the economist Robert Mundell showed, this delegation arises because it is impossible for any country to simultaneously have a fixed exchange rate, completely open capital markets, and an independent monetary policy. One of these must go. In Hong Kong, the choice was to forgo an independent monetary policy. Thus, interest rates have essentially moved in lockstep with those in the United States, with the exception of Hong Kong’s one-off 1 percentage point cut in October 2008 to narrow the spread of its discount window lending rate relative to the federal funds rate. 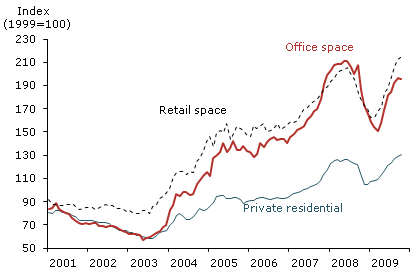 Even with its policy so closely aligned with ours, maintenance of the peg has forced the Hong Kong Monetary Authority to buy up dollars, which is increasing its foreign exchange reserves and money supply. While Hong Kong’s recovery has undoubtedly benefited from the Fed’s easy monetary policy, there is concern that the stimulus may soon prove excessive and inflationary if the recovery in Asia proceeds more rapidly than in the United States and other developed countries. There is already substantial concern in Asia that easy monetary policies in the United States and other developed economies are triggering another round of bubble activity, particularly in Hong Kong real estate prices (see Figure 1).

Real estate prices have been rising rapidly since the beginning of 2009, and are already approaching or surpassing pre-crisis levels. At the high end, the market is quite frothy. However, it is by no means clear that the recent bout of property price appreciation owes mainly to low world interest rates. Many analysts with whom we conferred believed that the bulk of the money flowing into Hong Kong real estate had originated in mainland China.

With respect to policy responses, the Hong Kong Monetary Authority is using “macroprudential” supervisory tools—the type of interventions that, looking back on our housing boom, we ourselves probably should have used to lean against the housing bubble and protect the financial sector. Hong Kong regulators have tightened permissible limits on loan-to-value ratios for high end real-estate-related lending, and have imposed a cap on maximum loan amounts. They are also considering an increase in the transaction tax on real estate, currently 3.75%, to curb speculation.

Turning to mainland China, the financial crisis caused a very significant slowdown, even though China’s economy never actually contracted. To offset the drag from declining exports, Chinese policymakers quickly put into place expansionary policies on a massive scale. The result has been a burst in Chinese growth which has rippled throughout Asia and may help to lead the world into recovery. 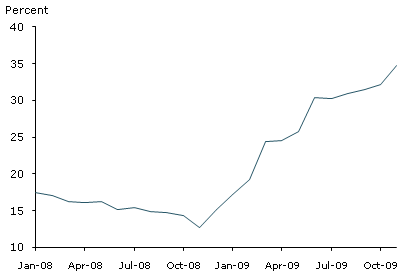 The recovery has been investment driven and was spurred by government spending and the stimulus resulting from an enormous lending boom. The Chinese government instructed banks to increase lending, and bank loans grew at an unprecedented pace of more than 30% year-over-year by the fall of 2009 (see Figure 2). The largest use of new funds has been for infrastructure. Inevitably, some of the investments financed by this lending boom will ultimately prove unprofitable, and the resulting bad loans will create burdens for China’s banking system. However, most analysts believe the burden will be manageable.

Chinese policymakers are concerned that an investment boom of current proportions cannot be sustained. Exports account for roughly 30% of Chinese GDP, and policymakers believe it will be difficult to maintain recovery if exports do not soon revive. China’s export performance suffered greatly in the current crisis, and this sector is notable in exhibiting a tepid recovery. Due to concern about exports, Chinese policymakers appeared conflicted about U.S. monetary and fiscal policy. On the one hand, they are eager to see a recovery in the United States and other major trading partners. On the other hand, they are concerned our policies may negatively impact the value of the dollar and their dollar asset holdings.

We encountered concerns, similar to those in Hong Kong, about the formation of new financial market and real estate bubbles.  At the time of our visit, the price-earnings ratio of Chinese stocks stood around 30. Analysts reported that prevailing market beliefs are for ever-increasing prices. The relatively superior performance of the Chinese economy in the current crisis has further fueled these expectations.

As in Hong Kong, Chinese officials are concerned about unwanted stimulus from excessively expansionary policies of the Fed and in other developed economies. Like Hong Kong, China pegs its currency to the U.S. dollar, but the peg is far less rigid. Before the crisis, the renminbi’s exchange rate had been adjusted upward at a gradual pace. Western policymakers have urged China to resume these revaluations. Most consider such exchange-rate realignment essential if the United States is to shift toward greater household saving and smaller government deficits. 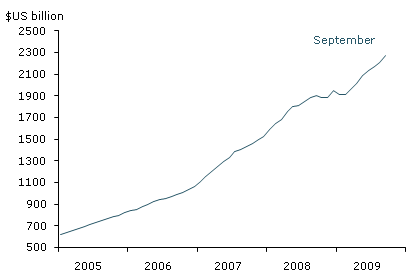 I noted earlier that a fixed exchange rate and free capital flows deprive Hong Kong of an independent monetary policy. The situation in the mainland is somewhat different because, in contrast to Hong Kong, China restricts capital inflows and outflows. These restrictions provide considerable—but not complete—insulation from foreign monetary policies and give the People’s Bank of China scope to conduct independent monetary policy. However, investors find ways to evade China’s capital controls and are pouring in money to take advantage of higher interest rates, a booming stock market, and an apparent gamble with only upside risk on future renminbi appreciation.

To hold down the renminbi’s value in the face of continuing trade surpluses and sizeable capital inflows, China’s central bank has had to buy dollars at a rapid pace. The result is that China’s foreign exchange reserves have now swelled to over $2.25 trillion dollars (see Figure 3). China’s money supply has also increased rapidly. Inflation in China has turned up, and most analysts with whom we met recognized that the renminbi will need to be revalued and monetary policy tightened to avoid inflation. Even though future exchange rate adjustments seem all but inevitable, they are unlikely to resume until at least the middle of 2010 because of lingering concerns about the pace of economic recovery among China’s major trading partners.

There is great interest in the prospects for a restructuring of China’s economy over the medium term—shifting away from continued heavy reliance on trade surpluses to fuel growth, along with the exchange rate policies designed to foster such surpluses, toward greater reliance on domestic demand, particularly more rapid growth in consumer spending. China’s household consumption share is exceptionally small at 35%, compared with just over 70% in the United States.

Chinese officials acknowledge that more balanced growth is desirable, not only to mitigate global imbalances that appear unsustainable, but also because it is in China’s interest. The problem is that such a shift requires difficult policy adjustments. Interestingly, a number of the officials and experts we encountered suggested that, by reducing demand for Chinese goods, the global crisis might have the benign effect of accelerating such a transition.

The vision of a more balanced Chinese economy usually includes an expanded service sector catering to domestic households that have increased disposable income and a willingness to reduce saving rates. An expanded Chinese social safety net is widely considered a precondition for lower household saving. The low share of consumption also reflects the fact that a substantial share of Chinese income accrues to firms, particularly state-owned enterprises, which have been quite profitable in the current recovery. It is also said that the underdevelopment of China’s domestic financial sector induces firms to hoard their savings in an effort to smooth investment.

Another factor hindering the prospects for reform is the Chinese government’s reluctance to turn its back on a development model that has served the nation well.  Export-oriented state-owned enterprises have spurred impressive job growth. And China’s trade-oriented growth strategy is believed to have fostered rapid productivity growth through technology transfer and direct investment by foreign firms, as well as the development of skills garnered by producing for global markets. 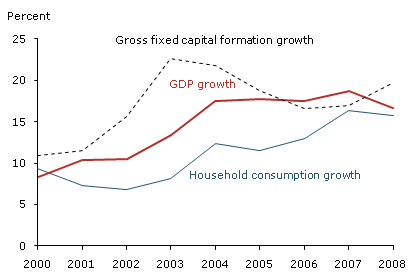 Household consumption is already growing at a robust double-digit pace. The problem is that investment is growing at an even faster pace, so the household consumption share is likely to continue to decline (see Figure 4). Moreover, the stimulus packages introduced to counter the global recession have had the unfortunate side effect of acting against reform, since the bulk of stimulus was in the form of increased investment, which primarily found its way into the export-oriented and state-owned sectors, or into infrastructure projects that supported these sectors. The consequence is that the stimulus has exacerbated overcapacity in Chinese manufacturing and increased pressure on Chinese firms to export.

China faces a quandary: While most officials acknowledge that a more balanced economy is desirable in the long term, the short-term policy of quickly responding to a reduction in the pace of Chinese export growth requires stimulus in the sectors where immediate job creation is greatest. These are precisely the labor-intensive state-owned enterprises and export-oriented sectors that leave the Chinese economy so unbalanced. For all of these reasons, observers anticipate that a transition toward a less trade-oriented growth strategy will take place slowly.

Overall, we encountered concerns about U.S. monetary policy, and considerable interest in understanding  the Federal Reserve’s exit strategy for removing monetary stimulus. Because both the Chinese and Hong Kong economies are further along in their recovery phases than the U.S. economy, current U.S. monetary policy is likely to be excessively stimulatory for them. However, as both Hong Kong and the mainland are currently pegging to the dollar, they are both to some extent stuck with the policy the Federal Reserve has chosen to promote recovery. Moreover, officials in both places are concerned about the prospects of dollar depreciation because they are large net holders of dollar-denominated assets.

In China’s case, increased exchange rate flexibility could mitigate growing inflationary concerns, and also act toward easing global imbalances and encouraging the development of the household sector, a shift the Chinese government now officially says it wants. The crisis has vividly demonstrated to the Chinese one of the downsides of pursuing an export-oriented growth strategy, namely increased vulnerability to adverse foreign shocks. The global crisis may therefore have enhanced the political will for an expedited transition to a more balanced Chinese economy.