One of the notable features of the current U.S. mortgage market is the predominance of fixed-rate mortgages. The interest rate differential between fixed-rate mortgages (FRMs) and adjustable-rate mortgages (ARMs) has fallen from a recent high of about 2.5 percentage points in the summer of 2004 to about 0.5 percentage point at the end of 2009. These changes in the interest rate differential have coincided with the collapse of mortgage securitizations other than those mediated by government-sponsored enterprises (GSEs), including Fannie Mae, Freddie Mac, and Ginnie Mae (see Krainer 2009). In addition, the Federal Reserve began large-scale purchases of GSE mortgage-backed securities (MBS) starting in January 2009, adding significant secondary market demand for fixed-rate mortgages. The Fed’s purchase program has not included MBS containing ARMs.

This Economic Letter reviews some of the factors determining consumer mortgage choices. It shows that ARM share has declined in ways that parallel the behavior of several key mortgage market interest rates. These developments have coincided with, among other things, Fed intervention in the market through large-scale MBS purchases. Thus, the Fed program, while supporting the functioning of the residential mortgage market overall, could have affected the composition of the mortgage market. To help understand this dynamic, this Letter estimates what the ARM share might have been under alternative scenarios in which fixed mortgage rates were higher, which would likely have been the case if the Fed had not been intervening in the market to the extent that it did. 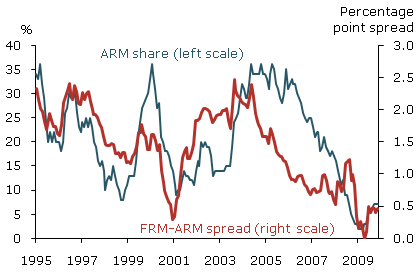 ARMs as a share of total originations have varied substantially over time and over the course of the business cycle. According to data from Freddie Mac, between 1995 and 2009, the only period for which information is available, average ARM share was 20%, with a low of 3% and a high of 36% (see Figure 1). ARM share has tended to be high during strong housing markets and low during periods of weak economic growth, more specifically during the two most recent recessions.

ARM share is currently extremely low, about 7% in November 2009. This shouldn’t be surprising. ARMs and fixed-rate mortgages are not perfect substitutes and one would expect prospective borrowers to compare the relative prices of the two products when arranging a loan. Typically, borrowers pay an interest premium to lock in a fixed rate for an extended period. But the premium for fixed-rate mortgages relative to ARMs fell nearly to zero in the spring of 2009, offering ARM borrowers little in the way of compensation for bearing interest rate risk. 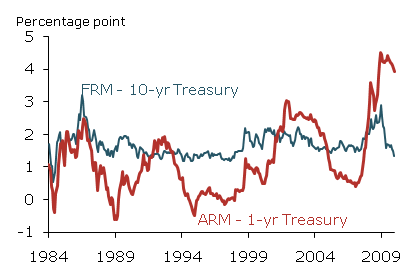 The low conforming fixed-rate mortgage/ARM spread has come at a time of considerable volatility in the bond markets. The conforming 30-year fixed mortgage rate has fallen over the past year as the Fed tried to lower interest rates. The spread between the fixed-rate mortgage and the 10-year Treasury note shot up after the onset of the financial crisis in 2007, when Treasury yields fell precipitously amidst a general flight to quality (see Figure 2). That spread came back down starting in December 2008 after the Fed announced its program of purchasing GSE mortgage-backed securities, known as agency MBS, which was followed by a significant fall in fixed mortgage interest rates. Significantly, the fixed-rate mortgage/Treasury spread is now about 1.5 percentage points, well within its historical range.

The behavior of ARMs has been quite different. Compared with rates on fixed mortgages, ARM rates did not come down much in 2009 and have been roughly constant for the past 18 months. The current spread between 1-year ARMs and benchmark 1-year Treasury bills is about 4.0 percentage points, its highest level since 1984. Changes in the ARM/Treasury spread have been the result of falling Treasury yields that were not matched by changes in the ARM rate. 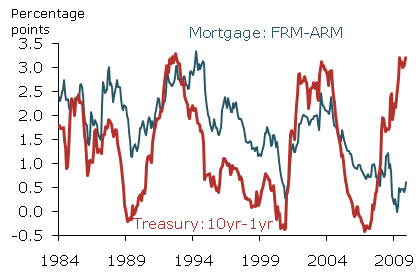 Predictions from a model of ARM choice

Can an economic model of mortgage choice explain today’s extremely low ARM share? What would ARM share be if some of the unusual relationships between interest rates discussed above were altered? Here I present a mortgage choice model that depends on a set of interest rates and individual borrower characteristics. The model includes the fixed mortgage rate, the fixed-rate mortgage/ARM spread, and the Treasury term spread. To control for the fact that borrower characteristics have changed over the course of the decade, I use a set of control variables: credit score, loan-to-value ratio, and the loan amount. I further include the past two years of house price appreciation data in the borrower’s market to take into account affordability concerns that may have influenced mortgage choice. I use loan data from LPS Applied Analytics. The model is estimated based on loans to borrowers with FICO credit scores greater than 650 (that is, not subprime) and of a size below the limits set by the GSEs (that is, not jumbo). Such a sample best mimics the conforming loan borrowers who currently dominate the mortgage market. 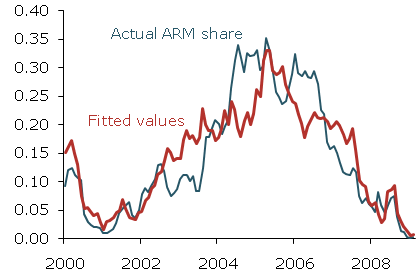 The thin blue line in Figure 4 plots the actual ARM share in the data. The thick red line depicts the ARM share estimated by the model. The model does fairly well in capturing the time variation in the aggregate ARM share. It is worth noting that the term spread variable is particularly important for capturing the ARM share variation. Indeed, borrower characteristics appear to be less important than interest rate levels in determining mortgage choice. To be sure, by focusing on borrowers with conforming mortgages, I am dropping consumers who may naturally be more inclined to use ARMs. However, this result is similar to that found in Vickery (2007) who finds that mortgage borrowers are extremely sensitive to price differences across products. The result also confirms the findings of Koijen, Van Hemert, and Van Nieuwerburgh (2009), who emphasize the role of bond risk premiums in household mortgage choice.

The mortgage choice model can be used to show what borrowers would have done if faced with different interest rates. Such an exercise is especially important if the Fed’s large-scale asset purchases altered the fixed-rate mortgage/ARM spread by lowering fixed-rate mortgage rates.

To perform the exercise, I use the mortgage choice model on data through 2008, before the Fed began its large-scale MBS purchases. Fixing the effects of interest rates and borrower characteristics on mortgage choices, I then use the model to predict what ARM share would have been in the first two months of 2009. I use observed data from that period, including borrower characteristics, the term spread, and mortgage rates. The predicted ARM share is about 1%, very close to the actual ARM share, which was virtually zero during these months.

In the current environment, ARM share is low because fixed mortgage rates are historically low and the narrow fixed-rate mortgage/ARM spread is not favorable for ARMs. This exercise suggests that these rate factors are offsetting anything else that might make ARMs attractive. It is not in the scope of this Letter to estimate the impact on mortgage rates of the many government programs geared towards supporting the housing market. The efficacy of these programs is the subject of debate. The approach here is to demonstrate that, even if the impact of these programs were fairly modest (that is, lowered the fixed rate somewhere in the 0.5 to 1 percentage point range), the effect on mortgage choices could have been substantial. To be sure, some of the decline of ARM share undoubtedly reflected a change in the composition of the mortgage market after the seizing up of the subprime market. More importantly, though, the low share implies that even borrowers who might have been natural candidates for ARMs judged that they were better off with fixed-rate mortgages. This suggests that if market conditions continue to improve and interest rates on ARMs relative to short-term Treasury rates move more into line with historical patterns, the share of mortgage financing through ARMs could recover. Indeed, in recent months the ARM share has edged back up, though it still remains low.

John Krainer is senior economist at the Federal Reserve Bank of San Francisco.