Monetary policymakers have long debated the usefulness of the Phillips curve, which relates inflation to measures of economic slack. Since the recession started in late 2007, evidence suggests that, consistent with the Phillips curve, a high level of unemployment has contributed to a decline in inflation.

Since the fourth quarter of 2007, inflation has declined substantially. During the same period, the unemployment rate has more than doubled. Are these two developments connected?

The well-known Phillips curve model suggests that that the high level of unemployment and pervasive slack in the economy could contribute to the decline in inflation. Many economists argue that the Phillips curve relationship between unemployment and inflation is a key part of the linkage between the monetary policy instrument–the short-term interest rate–and the monetary policy objective of price stability (Rudebusch and Svensson 1999). However, Phillips curve skeptics maintain that there is little empirical evidence of a relationship between economic slack and inflation. For example, Atkeson and Ohanian (2001) find that, from 1984 to 1999, Phillips curve forecasts are no better than naive forecasts that assume inflation will not change, that is that it will be the same over the next year as it has been over the past year.

The issue of whether the Phillips curve is useful for understanding inflation behavior has figured prominently in monetary policy discussions, with Federal Open Market Committee (FOMC) members expressing opposing views. The following quote from the FOMC minutes in August 2009 reflects this disagreement:

Most participants anticipated that substantial slack in resource utilization would lead to subdued and potentially declining wage and price inflation over the next few years; a few saw a risk of substantial disinflation. However, some other participants were skeptical that temporarily low levels of resource utilization would reduce inflation appreciably, given [the] loose empirical relationship of economic slack to inflation and the fact that the public did not appear to have reduced its expectations of inflation.

This Economic Letter examines recent evidence concerning the connection between unemployment and inflation. We argue that, in a deep economic downturn such as the current one, inflation and unemployment do tend to move together in a manner consistent with the Phillips curve. But, outside of such severe recessions, fluctuations in the inflation and unemployment rates do not line up particularly well. Inflation appears to be buffeted by many other factors. This explains why some studies find only a “loose empirical relationship” between economic slack and inflation. Thus, compared with the relatively tranquil period between the mid-1980s and the mid-2000s, evidence suggests that recent high unemployment rates are broadly consistent with the sizable decline in core inflation since the fourth quarter of 2007, a relationship that broadly fits the Phillips curve model.

A simple economic rationale explains why changes in the unemployment rate help determine movements in inflation. The law of supply and demand suggests that excess supply of a good tends to push down its price, while excess demand tends to push up the price. The unemployment rate is a key indicator of the balance of supply and demand in the labor market. During periods of high unemployment, the abundance of jobless workers and the scarcity of job vacancies put downward pressure on wages. With labor costs well contained, businesses have less need to raise prices. And with weak demand for goods and services in such periods, businesses often can’t raise prices.

Figure 1
Unemployment and change in inflation 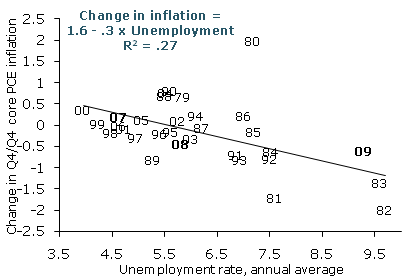 Figure 1 illustrates the Phillips curve by plotting the historical relationship between annual unemployment rates and changes in year-over-year core inflation rates for each year during the past three decades. (Core inflation is measured by changes in the personal consumption expenditures (PCE) price index excluding food and energy, a key inflation indicator followed by monetary policymakers.) The figure shows a clear negative relationship, as indicated by the downward-sloping regression line. For example, years with high unemployment also typically post declines in inflation (notably 1981 through 1983). In the past few years, the relationship between unemployment and inflation has been very close to that predicted by the historical data. (The observations for 2007, 2008, and 2009 in Figure 1 are given in bold.)

Here, we examine the extent to which the sharp run-up of the unemployment rate since late 2007 has contributed to declines in core inflation. To be specific, suppose we had all the data up to the end of 2007 before the onset of the recession and we believed that the unemployment rate in the next year and a half would double. Would we have anticipated the large declines in core inflation since late 2007, as the Phillips curve would suggest? 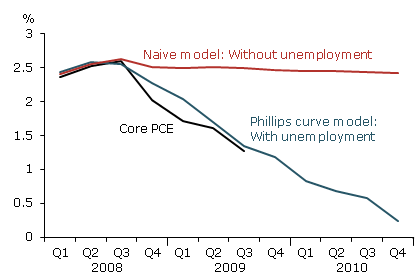 To evaluate the accuracies of the forecasts, we use a statistical technique known as root mean squared error (RMSE) for each model. The RMSE measures the distance between a model’s forecast inflation path and the actual inflation path. Thus, the smaller the value of the RMSE, the more accurate the forecast. Based on this measure, the Phillips curve produces substantially more accurate forecasts than does the alternative model without unemployment gap measures. The RMSE of the Phillips curve model is about 25% of that of the naive model without the gaps. The Phillips curve model does better because it takes into account the large increase in the unemployment rate as a signal for lower future inflation, whereas the alternative model ignores information from the unemployment gap.

Similar results are obtained when alternative measures of the inflation rate and unemployment gaps are used. The results also are similar when changes in real oil prices are factored in as an additional control variable.

Our findings are consistent with Stock and Watson (2009), who argue that measures of economic activity such as unemployment gaps do not seem to help improve the accuracy of inflation forecasts in relatively tranquil periods, but do help forecast inflation in periods with large deviations of the unemployment rate from the NAIRU. In this sense, our findings do not contradict those in Atkeson and Ohanian (2001) and others, who focus on the sample period during which the U.S. economy experienced relatively tranquil business cycles, a period often referred to as the Great Moderation.

Our statistical evidence should be interpreted with some caution. Our evidence does not imply that inflation cannot run up as long as unemployment remains low. Other factors determine inflation beside the unemployment gap. This is an important and painful lesson that we have learned from the experience of the 1970s. For example, supply shocks and commodity price increases can push inflation up. Furthermore, inflation expectations are also likely to be an important inflation driver and are incorporated in modern Phillips curve theories.

We have examined the connection between inflation and unemployment–a relationship that many consider central to the conduct of monetary policy–in the context of the most recent recession that started in late 2007. Our findings suggest that the high level of the unemployment rate over the past year likely contributed to the substantial declines in the inflation rate, as the Phillips curve would predict.

Glenn Rudebusch is senior vice president and associate director of research at the Federal Reserve Bank of San Francisco.