The “Inflation” in Inflation Targeting

Many central banks conduct monetary policy according to an inflation targeting framework, which requires that some measure of inflation be chosen as the target. One approach would be to use an index of goods and services whose prices are market determined and not subject to frequent, idiosyncratic, and transitory changes. That could be an index based on the personal consumption expenditures prices of services and durable goods, excluding nondurable goods, similar to but distinct from the U.S. core personal consumption expenditures price index.

Many central banks conduct monetary policy according to an inflation-targeting framework. Central to such a framework is the principle that monetary policy decisions are formulated in the context of an explicitly announced numerical target or range for some measure of inflation. Obviously, if an inflation-targeting framework is to be operational, then the important question of what measure of inflation to target cannot be avoided. There is unlikely to be a single answer to the question of which measure is best. And, indeed, inflation-targeting countries have varied significantly in the measures they have selected. This Economic Letter uses U.S. data to discuss some of the principles and issues involved in choosing an inflation measure to target.

What is inflation targeting?

I start by reviewing some of the central elements of inflation targeting regimes. As Bernanke and Mishkin (1997) discuss, inflation targeting is a framework for conducting monetary policy. The framework emphasizes price stability as the medium- to long-term goal of monetary policy. And it dispenses with intermediate targets, such as money growth or a fixed exchange rate, in favor of an explicitly announced target for inflation. To insulate monetary policy from short-term political considerations, which could lead to higher inflation than desired, once an inflation-targeting framework is in place, the central bank is allowed to conduct monetary policy independently. Accordingly, in the terminology of Debelle and Fischer (1994), the central bank is granted “instrument independence”—the freedom to employ its tools to achieve its policy goals—but not “goal independence,” which is the freedom to choose those goals.

Although inflation targeting provides a general framework for conducting monetary policy, it does not offer a “one-size-fits-all” prescription. There is considerable variation among inflation-targeting central banks over important aspects of the framework (Bernanke et al. 1999). At the same time, all inflation-targeting central banks have some form of explicitly announced target for inflation. Hence, as noted earlier, a decision has to be made about what measure of inflation to target.

What measure of inflation to target?

The United States does not practice inflation targeting. But some of the principles underlying this framework can be illustrated using U.S. data. It might seem natural that a series such as the consumer price index (CPI) would make a suitable target. In many regards, it would be. The CPI features prominently in the business press, it is released in a timely fashion, and it is not subject to historical revision. Moreover, it is constructed by the Labor Department’s Bureau of Labor Statistics, an institution that is independent of the Federal Reserve, which is important from an accountability perspective. However, the CPI was developed to measure the cost of living, that is, the cost of purchasing a particular basket of goods and services. It is not automatic that monetary policy should be directed at stabilizing changes in the cost of living. In a world with many goods and services whose prices do not change in unison or for the same reason, inflation is most usefully thought of as a generalized upward movement in prices, rather than simply an upward movement in one particular basket of goods and services. That’s true even if the price of that basket is intended to reflect the cost of living. Moreover, the CPI is a fixed-weight index and is known to overestimate changes in the cost of living. Lebow and Rudd (2003) calculate the overestimation to be about 0.9 percentage point per year. By contrast, the personal consumption expenditures price index (PCEPI) is thought to be less affected by this overestimation and is often favored as a measure of changes in consumer prices. 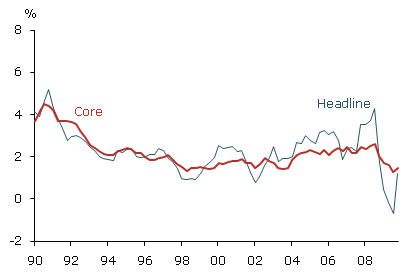 Many individual goods prices enter the CPI and the PCEPI. The prices of some of these, such as tobacco and alcohol, are importantly influenced by taxes and excise duties and cannot reliably be viewed as market prices. For example, the increase in the excise duty on tobacco as part of the Children’s Health Insurance Program Reauthorization Act of 2009 affected the cost of living but did not represent a rise in inflation. Other prices are volatile and subject to large but transitory movements. Fresh produce prices are weather-related and can be seasonal. The prices of energy-related goods such as gasoline and natural gas jump up and down based on weather and geopolitical developments. For both fresh produce and energy-related goods, price changes might often represent relative price movements rather than true inflation. Recognizing these issues, inflation-targeting central banks are generally charged with targeting some measure of “core” inflation rather than “headline” inflation. In the United States, core measures are available for both CPI and PCEPI inflation, constructed by excluding all food and energy prices. 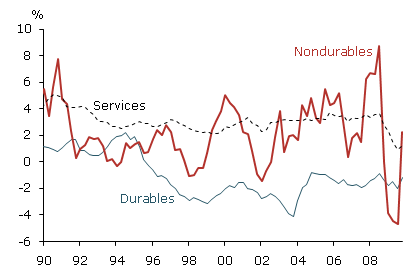 Of course, the argument for excluding food and energy-related goods is not just that their price changes are volatile, but also that these changes are typically idiosyncratic and transitory. To illustrate this point, I perform a statistical exercise using regression methods to measure the persistence of price changes in the durables, nondurables, and services components of the PCEPI from the first quarter of 1995 to the fourth quarter of 2009. The measure of persistence for the durables and services components is much higher than the measure for persistence in the nondurables component, which is close to zero, implying that much of the variation in nondurables inflation is transitory.

Should we care more about some goods prices than others?

The notion that an inflation-targeting central bank might care more about the prices of some goods than others is consistent with much New Keynesian literature emphasizing “sticky” prices. In many of these models, monetary policy can improve the allocation of productive resources by stabilizing inflation measured by a price index composed of goods whose prices are sticky. In practice, price stickiness is associated with how frequently price changes occur (Bils and Klenow 2004). Since gasoline prices, and many, but not all, food prices change frequently, this New Keynesian literature is consistent with a core inflation measure that excludes these goods. But this literature also suggests excluding the prices of certain other goods, such as airline tickets and such clothing products as boys’ sweaters and women’s tops. Interestingly, in their analysis of the price data used to construct the CPI, Bils and Klenow find that the prices of nondurable and durable goods adjust somewhat more frequently than the prices of services, with nondurable goods adjusting slightly more frequently than durable goods.

Mankiw and Reis (2003) ask what measure of inflation an inflation-targeting central bank should stabilize. They take as their starting point the idea that an inflation-targeting framework has been adopted. They then ask what measure of prices (the stability price) would, if kept stable, impart the least volatility to economic activity. In the spirit of Mankiw and Reis, one can extend this reasoning to construct a stability inflation index. Clearly, a central issue in doing so would be determining the weights to be assigned to the constituent prices. 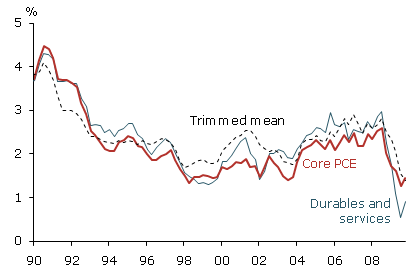 For an inflation targeting regime to be operational, some measure of inflation must be chosen as the target. An important line of economic reasoning suggests that it is the generalized upward movement in an index of goods and services whose prices are market-determined and “sticky” that a central bank ought to be concerned about. One possibility would be to target changes in a PCE-based price index including durable goods and services and excluding nondurable goods. Such an index would be closely related to but distinct from the core PCEPI.

Richard Dennis is a senior economist at the Federal Reserve Bank of San Francisco.