Fiscal Crises of the States: Causes and Consequences

The recession that began in late 2007 severely reduced state tax revenue and increased demand for many public services. In the near term, institutional and political factors limit the options states have for cutting spending and raising taxes. Aid to states in the federal economic program is winding down next year and the situation is likely to get worse before it gets better. Painful budgetary choices lie ahead for many states, though the drag on the national economy should be modest.

In recent months, state lawmakers have been gathering in capitals around the country to try once again to hammer out balanced budgets for the fiscal year that in most states starts in July. Faced with the longest, deepest and broadest recession since the Great Depression, states have seen tax receipts plummet and demand for government safety-net programs soar. The result has been large and growing fiscal imbalances that are likely to persist for some time. Recent data from the Center on Budget and Policy Priorities show that the combined budget gap states faced heading into fiscal year 2009 was $110 billion, or around 15% of total state general fund budgets (see McNichol and Johnson 2010). The gap heading into fiscal 2010 was even larger, $200 billion, or roughly 30% of general funds.

This Economic Letter examines the fiscal crises faced by state governments, focusing on three key questions: What caused these crises? When are they likely to end? And what might be their broader impact going forward?

What caused the states’ fiscal crises?

The causes and severity of fiscal crises vary, but two primary circumstances have affected every state to a greater or lesser extent. The most obvious is the profound macroeconomic shock that hit all states. The recent recession was one of the sharpest economic contractions in U.S. history. Real GDP fell by 3.8% while nonfarm employment fell by 6.1%, or about 8.4 million jobs, from peaks registered around the start of the recession until they bottomed out. Moreover, the unemployment rate essentially doubled, going from 5% at the beginning of the recession to a peak of 10.1% in October 2009. The economic distress was not uniform across states. Many, especially those in the West which had greater exposure to the housing downturn, suffered more dramatic declines. Other states fared better than the nation overall. Still, no state escaped the effects of the downturn. 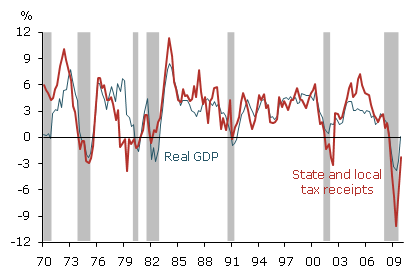 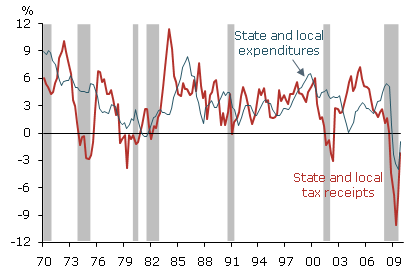 The institutional arrangements that limit the ability of state governments to respond to economic shocks are a second cause of fiscal troubles. State governments are constrained in at least three ways. First, nearly all states have balanced budget requirements. The details of these vary, but in general they prevent states from engaging in deficit spending—that is, allowing planned general fund spending to exceed anticipated revenue in an upcoming budget year. Second, many states came into this recession with modest or nonexistent savings or “rainy-day” funds. State governments are politically, and in many cases legally, limited in how much they can put aside in rainy-day funds. Third, states have important checks on their ability to reduce spending during recessions. For one thing, demand for many of the services state governments provide increases during downturns. For example, claims for unemployment insurance benefits inevitably rise as a state’s unemployment rate climbs. Moreover, many state programs are tied to federal matching funds, which makes it very costly for states to reduce spending in these areas. For instance, states typically receive reimbursement from the federal government for between 50 and 80% of their Medicaid expenses. The federal stimulus package, the American Recovery and Reinvestment Act of 2009, increased each state’s matching percentage by 6.2 percentage points. This means that, if a state cuts Medicaid expenses by one dollar, it will net savings of only between 12 and 44 cents, while denying its residents a dollar’s worth of Medicaid services.

Variations in the severity of the economic shock and differences in institutional factors affecting fiscal policy help explain why some states are in much deeper budgetary holes than others. Consider the cases of California and Oregon. Leading up to fiscal year 2009, which began on July 1, 2009, California had a budget gap of 37%, while Oregon’s gap was just 7%, according to the Center on Budget and Policy Priorities. What explains the difference? To gauge the severity of the economic shock state by state, we ask what would each state’s 2009 gap have been if they had kept per capita expenditures constant from 2007 onward as revenue fell. It turns out that Oregon’s and California’s budget gaps would have been roughly the same, around 20%. However, Oregon in 2008 curtailed expenditure growth, enacted some notable tax increases, and tapped into its rainy-day fund to reduce its budget gap. On the other hand, California saw expenditure growth barely slow at all, enacted only limited tax increases, and had nothing in its rainy-day fund coming into the recession. Much of California’s limited policy response reflected institutional constraints on the ability of lawmakers to change fiscal policy. For instance, tax increases in California must be approved by a two-thirds majority of the legislature, and voter propositions approved in the past greatly limit the legislature’s ability to curtail spending growth in many areas.

When are the crises likely to end?

All indications are that states will be struggling to move their budgets toward balance for quite some time. Recovery of state finances historically lags recovery of the national economy. Forecasters expect the national economy to recover gradually (see Weidner and Williams 2010). Thus, it will take quite a while before states see considerable improvement in their fiscal health. Indeed, estimates from the Center on Budget and Policy Priorities show significant state budget gaps persisting through at least 2012. And a recent Rockefeller Institute report noted that most states are uncertain when revenue will return to prerecession levels, indicating the problem could continue well beyond 2012 (see Boyd and Dadayan 2010).

In many respects, fiscal conditions are likely to get worse before they get better. Federal stimulus plan grants to state governments have helped states close budget gaps. However, federal stimulus funds are set to diminish in 2011 and all but disappear in 2012, leaving states to deal with their budget gaps without this federal support. Another factor that could worsen state budget problems is the depletion of rainy-day funds. At this point, even states that had rainy-day funds going into the recession have fully tapped them. Finally, some states have used accounting tricks to in effect kick the fiscal adjustment can down the road. Now these have largely been exhausted and the end of the road is in sight.

State budget crises are already having and will continue to have very real and significant effects on residents and businesses. Cuts to public services, public safety, and education are severe and could potentially have lasting long-term consequences. And large tax increases appear inevitable in many states, which will take an economic toll. These effects will undoubtedly be painful to individuals who experience higher tax bills or reduced access to health care, education, and other services. However, the impact of state fiscal crises on the overall economy will likely be more modest. Projected 2010 state budget gaps account for only about 1% of national GDP. The combined state budget gaps from 2009 through 2012, as calculated by the Center on Budget and Policy Priorities, total less than the estimated cost of the 2009 federal stimulus package. Most importantly, even though the shock to state finances has been unprecedentedly large, it was predictable given the severity of the recession. As such, Federal Reserve and private forecasters generally incorporated the negative impact of state and local budgets into their macroeconomic models. Many forecasters are projecting moderate GDP growth over the next few years. These forecasts have already built in a modest drag on growth arising from state and local fiscal strains.

The current fiscal crises that most states are facing are generally the result of a severe macroeconomic downturn combined with a limited ability of the states to respond to such shocks. States are facing increased demand for public services at the same time revenue is falling. Federal stimulus support for state budgets is winding down over the next two years. Rainy-day funds are all but exhausted. Thus, state fiscal crises aren’t likely to go away soon and will probably get worse before they get better. The solutions states employ to close projected budget gaps will have painful effects on state residents and businesses but pose a more modest risk to the national recovery. Historically, the health of the national economy determines the health of state finances, not the other way around. Sustained improvement in the national economy is essential for states to grow their way out of their current problems and improve their fiscal conditions.

Jeremy Gerst is an economic analyst at the Federal Reserve Bank of San Francisco.

Daniel Wilson is a senior economist at the Federal Reserve Bank of San Francisco.