What Is China’s Capital Seeking in a Global Environment?

China is becoming increasingly active in international markets for mergers and acquisitions. Chinese acquirers are buying stakes in foreign companies to get access to resources, markets, and technology, among other reasons. With China’s expanding wealth and vast foreign exchange resources, further growth in the volume and variety of foreign direct investment is likely.

China’s role in the global economy is growing as it increases its market share in international trade and builds political influence in international forums. Its expanding role as an international investor is less publicized. While China heavily regulates many cross-border transactions and portfolio capital outflows are still very limited, direct investment overseas by Chinese companies has mushroomed in recent years. China’s total foreign holdings acquired through mergers and acquisitions (M&A), basically nonexistent 20 years ago, reached over $87 billion by the end of 2008. 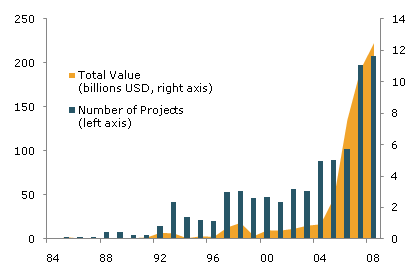 Traditional economic theory identifies market-seeking, efficiency-seeking, and resource-seeking motives as the main reasons companies engage in foreign direct investment (Caves 2007). Market-seeking investment is aimed at gaining access to foreign markets. Companies may find it less costly or easier to produce or assemble goods in or near target markets. Foreign car companies are seeking markets when they build assembly plants in the United States. Efficiency-seeking investment is designed to move production to countries where inputs, especially labor, are cheaper. U.S. shoe companies are seeking efficiency when they build factories in Asia in order to produce for U.S. markets. Resource-seeking investment is aimed at gaining access to natural resources, particularly those that may be scarce in the country where the acquirer is located. Energy companies are seeking resources when they purchase oil fields overseas.

Researchers have recently noted other motives for foreign direct investment, such as strategic economic expansion, increased geopolitical influence in a target region, control of strategic assets, access to technology, and a desire to overcome domestic institutional barriers, such as capital controls and regulation (Dunning and Lundan 2008, Peng et al. 2008, Rui and Yip 2008, and Alon 2010). 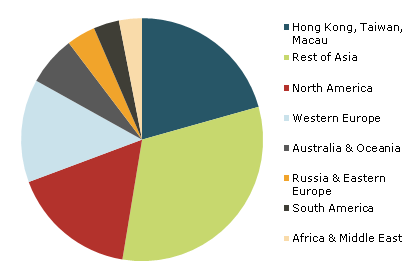 Our analysis relies upon SDC Platinum Mergers and Acquisitions Database, which shows a total of 1,210 acquisitions between 1982 and 2008 in which the acquiring company was registered in mainland China and the target was registered outside China. Figure 1 shows the number and total value of deals during this period. Deal volume skyrocketed from one or two per year in the early 1980s to around 50 in the 1990s, and reached over 200 in 2008. Total transaction value grew even faster, reflecting the trend toward higher value deals. Such explosive growth reflects both the accumulation of financial wealth in China and the relaxation of restrictions on capital outflow from China. Nevertheless, despite Chinese reforms over the last decade that removed bans on foreign direct investment by the country’s private sector, most outward direct investment during this period was conducted by state-owned or quasi-state-owned firms (Alon 2010).

What is China seeking? 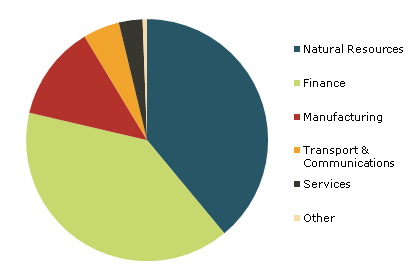 Chinese acquirers are clearly seeking corporate control through M&A deals, not simply large portfolio investments. The acquired share was more than 50% in 72% of the deals and 100% in 48% of the deals. The share was under 20% in only 16% of the deals.

One evident goal of Chinese acquisitions is access to resources, especially those China lacks. Two of China’s four largest acquisitions were in the resource sector. State-owned China National Petroleum Company purchased 100% of PetroKazakhstan in August 2005. And Sinopec, a member of the state-owned China Petrochemical Corporation, bought a 96.9% stake in the Russian oil company Udmurtneft in June 2006. China’s resource-seeking acquisitions have been distributed all over the world, with Canada, Australia, and Russia leading target countries.

The motives for China’s vast investments in the financial sector are less obvious. A few high-profile purchases of noncontrolling stakes in recent years were apparently motivated by financial returns and should be viewed as portfolio investment, not foreign direct investment. Examples include purchases announced in 2007 by China Investment Corporation, China’s sovereign wealth fund, of a 9.9% stake in Morgan Stanley and The Blackstone Group; state-controlled China Development Bank’s purchase of a 3.1% stake in Barclays; and privately held Ping An Insurance group’s 4.2% investment in Fortis. In these cases, China apparently chose not to exceed the 10% ownership threshold that would have required regulatory approval.

Despite these examples, buyers got controlling stakes in target companies in most Chinese financial sector acquisitions. Leading destinations for Chinese financial acquisitions were Hong Kong and the United States, followed by South Africa and the United Kingdom. The purchase by ICBC, the largest of China’s state-controlled commercial banks, of 20% of South African Standard Bank Group, announced in October 2007, is an example. Chinese banks have bought a number of Hong Kong and Macau commercial banks. ICBC has been the most active acquirer.

Manufacturing acquisitions are another major component of China’s outward direct investment. Such acquisitions are in line with the global trend towards horizontal and vertical integration of production processes across national borders. The main reasons for horizontal integration, that is, mergers and acquisitions of companies in the same industry, are increased production efficiency due to economies of scale and merged technologies, and reduced competition in product markets. Another motive for horizontal investment arises from the desire of Chinese companies to circumvent formal and informal barriers to their exports by investing in foreign production facilities. Thus, horizontal cross-border M&A activity can be classified as efficiency-seeking and market-seeking.

Through horizontal M&A, Chinese companies are also able to acquire intangible proprietary benefits to compensate for their comparative disadvantages in branding, marketing, management, and international experience (Rui and Yip, 2008). Chinese businesses need these competencies to build market share in highly competitive developed markets, such as the United States and Western Europe. These advanced economies are the primary destinations for such acquisitions. Mindray Medical’s purchase of Datascope Patient Monitoring in the United States in 2008 is an example. In its investor communications, Mindray emphasizes marketing in the United States and operating efficiencies gained by taking over U.S. companies.

Vertical integration may lead to efficiency gains because each part of the production process is located where it can be accomplished most efficiently, without the costs that arise from intermediation and trade when manufacturing is distributed among many companies. Chinese companies engage in vertical integration mainly by buying producers of specialized machinery and equipment. The types of producers Chinese companies buy have evolved from basic machinery to high technology. Shoudu Iron and Steel Company’s 1988 purchase of 51% of Mesta Engineering, a U.S. producer of metal production machinery, is an example of the former. China’s foray into technology is exemplified by the 2008 purchase of Quorum Systems, a San Diego radio equipment maker, by Spreadtrum Communications, a producer of semiconductors for wireless communication. In a broad sense, such vertical deals can be viewed as resource-seeking, with machinery being the target resource, or as strategic acquisitions of technology. The United States, Europe, and Japan are primary destinations for such transactions.

Finally, while China does not appear to be engaging in the most common form of efficiency-seeking foreign direct investment, that is, looking for cheap labor in other countries, some other takeovers fall into the efficiency category. Chinese companies have been active buyers in the transportation equipment and transportation services sectors. Examples include China International Marine Containers’ 2007 purchase of Burg Industries, a Dutch producer of specialized transportation equipment, and investments by COSCO, a large state-owned shipping company, in freight terminals in Greece, Italy, and Belgium between 2001 and 2007. Such investments may enhance China’s ability to transport the goods it produces. Hong Kong and Singapore, major re-exporters in Asia, are main targets for such acquisitions.

China invests abroad for many reasons, including to support an expanding industrial sector with a growing appetite for natural resources, capital inputs, and access to advanced technology and foreign markets. This pattern, combined with China’s burgeoning wealth, suggests that China’s outward foreign direct investment will expand and spread more widely across countries and industries. The majority of future deals are likely to take place in the financial and natural resource sectors, which, for China, are areas of comparative disadvantage. China’s investment in companies with cutting-edge technology is also ripe for growth since China’s domestic industrial composition is becoming more sophisticated.

State-owned companies dominate China’s outward investment, reflecting the government’s need to deploy the country’s vast foreign reserves. As China’s official foreign reserves grow, so too will its foreign investment, including equity investment in search of higher yield. China’s sovereign wealth funds, however, are unlikely to seek controlling stakes in foreign target companies because they don’t want to be subject to regulatory scrutiny overseas. Most such purchases are likely to take the form of portfolio investments rather than foreign direct investment. As of today, the $87 billion that China has directly invested in foreign companies is still a drop in the sea compared to the over $2 trillion in foreign reserves that the Chinese government holds.

Titan Alon is a research associate at the Federal Reserve Bank of San Francisco.

Galina Hale is a senior economist at the Federal Reserve Bank of San Francisco.

João Santos is an assistant vice president at the Federal Reserve Bank of New York.