Okun’s Law and the Unemployment Surprise of 2009

In 2009, strong growth in productivity allowed firms to lay off large numbers of workers while holding output relatively steady. This behavior threw a wrench into the long-standing relationship between changes in GDP and changes in the unemployment rate, known as Okun’s law. If Okun’s law had held in 2009, the unemployment rate would have risen by about half as much as it did over the course of the year.

In this Economic Letter, we examine what might have disrupted the usually reliable empirical relationship described by Okun. We consider a variety of potential factors, including measurement errors in employment tallies, atypical changes in employer and worker behavior, and unusual surges in productivity, or the efficiency of producing output. Our results indicate that the main factor driving the unusual rise in unemployment relative to output was very rapid productivity growth, which allowed businesses to cut back sharply on labor while maintaining output levels.

Okun’s law: past and present

In his seminal 1962 article, Okun noted two important empirical relationships between the rate of unemployment and real output: quarterly changes in the unemployment rate were related to quarterly growth in real GDP, and deviations in the unemployment rate from its non-accelerating inflationary level (NAIRU) were related to deviations in GDP from its potential. (See Abel, Bernanke, and Croushore 2008 for a nice textbook treatment.) The first of these associations is known as the growth-rate version and the second is known as the gaps version of Okun’s law. In both expressions, the relationship between output and unemployment is roughly two to one. This “constant of proportionality” forms the basis for most large-scale macroeconomic forecasting models.

Figure 1
Okun’s law before and during the 2007 recession 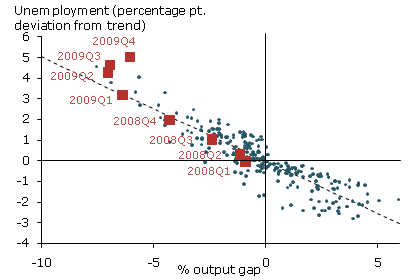 Indeed, early in the 2007 recession there was little evidence of divergence from Okun’s law. In the second quarter of 2009, however, things went off track and a wedge began to emerge between changes in output and changes in unemployment. As shown by the red squares appearing above the line in Figure 1, the familiar two-for-one pattern broke down and unemployment went up by substantially more than expected. By the fourth quarter of 2009, the deviations in output to unemployment were the largest observed over the span of the data. The divergence of the current data from the typical pattern wreaks havoc with forecasters, but also leaves a puzzle: Why did unemployment rise so rapidly in 2009? We now examine that puzzle and discuss whether it is likely to persist in the coming year.

Accounting for the divergence

The simple rule-of-thumb relationship between output and unemployment hides more complex relationships that influence Okun’s two-to-one rule. One way to see this is to recall that total output, or GDP, reflects a combination of several variables, including number of workers, the hours they work, and the efficiency with which they produce output. Thus, a natural starting point for thinking about why Okun’s law failed to hold in the recent past is to ask which, if any, of the underlying variables deviated from normal cyclical patterns. To investigate this, we compare movements of each of these variables relative to GDP in this cycle with data from previous years. (See Figure 2) 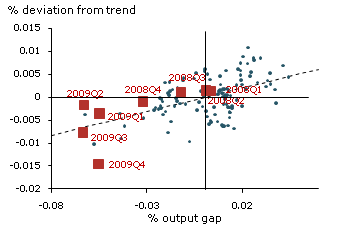 B. Hours per worker 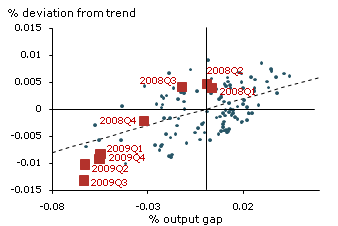 B. GDP per nonfarm hour 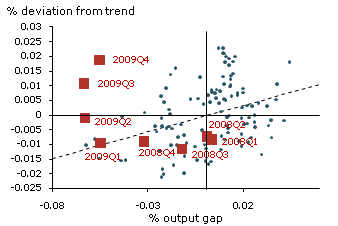 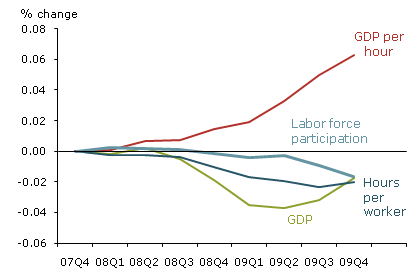 Another factor that might be contributing to the breakdown in Okun’s law is hours worked per employee. In recessions, the number of hours worked generally falls as firms cut back on overtime or regular hours in response to declines in demand. By reducing worker hours instead of reducing the workforce, firms lay off fewer workers. If this recession were different and firms laid off more workers and then worked the remaining ones longer, then we would expect some deviation in the normal GDP/unemployment relationship. However, the second panel of Figure 2 does not support this hypothesis. The hours worked per employee is roughly in line with previous periods and, if anything, is working to reduce, rather than increase, the wedge in Okun’s law.

The final panel of Figure 2 points to the factor that turns out to be the main driver of the recent departure from Okun’s law—average labor productivity, measured as GDP per nonfarm hour worked. The deviation in average labor productivity relative to the GDP gap is far outside the range plotted over time and is consistent with the rapid productivity growth recorded in 2009. The surge in labor productivity allowed employers to keep output steady while shedding workers and reducing hours of work in the economy. As such, it allowed unemployment to rise much more than expected given the change in GDP, breaking the normal pattern between the two measures observed over the past 60 years.

Beyond the three factors depicted in Figure 2, certain measurement issues related to accurately capturing the decline in employment might affect Okun’s law. However, in a separate analysis, we have found that such factors cannot explain the gaps in Okun’s law shown in Figure 1.

While the panels of Figure 2 provide a sense of which variables are likely to be driving the recent wedge into Okun’s law, they do not provide any evidence on the net effect of all these movements on the recent path of GDP. To do this, we turn to a GDP decomposition which breaks the recent path of GDP into its component parts. For simplicity of exposition, we show the decomposition in terms of output growth. This also serves as a robustness check on the gaps method which by definition relies on assumptions about potential output and the NAIRU. Figure 3 shows the results of this decomposition. The figure plots the contribution to the percentage change in output associated with each of the factors.

The decomposition of GDP growth yields similar results to those suggested by Figure 2, namely that the deviation from Okun’s law began in 2009 and was driven by rapid growth in average labor productivity. The decomposition also highlights the differences in the first and second half of the recession. The first phase was characterized by small deviations from Okun’s law mostly explained by unusual resilience in labor force participation. In 2009, the situation changed. Employment fell precipitously, hours per worker declined, and average labor productivity surged, allowing GDP to hold steady.

The data presented here consistently point to unusually strong productivity growth as the main driver of the departure from Okun’s law in 2009. A key question that remains unanswered by this analysis is whether this pattern will continue in 2010. Most forecasters assume that the economy will return to its historical path this year, following Okun’s two-to-one ratio of changes in GDP and changes in unemployment. Under this scenario, unemployment would begin to edge down this year as the economy recovers and gains momentum. But there are clearly risks to this view. Some of the surge in productivity growth in 2009 was likely due to such cyclical factors as layoffs of least productive workers, greater intensity of work effort, and shifts away from producing intangible capital, which is not measured in output statistics. Anecdotal evidence suggests that efforts to contain costs and remain nimble in the face of uncertainty have become a fixture in business strategy. If productivity keeps on growing at an above-average pace, then unemployment forecasts based on Okun’s law could continue to be overly optimistic.

Mary Daly is a vice president at the Federal Reserve Bank of San Francisco.

Bart Hobijn is a research advisor at the Federal Reserve Bank of San Francisco.