The enormity of the recent financial shock was not fully apparent until well into the crisis. One result was that banks did unusually low levels of pre-reserving against eventual loan losses. Much of that underreserving was related to the extraordinary decline in real estate values that led to outsized losses on mortgage loans. This experience highlights the limitations of the bank provisioning process and the need to guard against worse-than-expected economic conditions through higher capital levels.

For many, if not most, market participants, full realization of the severity of the recent financial crisis and accompanying recession, both the worst since the Great Depression, developed only as events unfolded. The continued underestimation of the full depth of the crisis in large part reflected a reliance on past experience to project what turned out to be extraordinary events. In particular, at the center of the financial crisis was a meltdown of the mortgage market owing to the initial boom and subsequent bust in real estate values. While there were signs that real estate values were severely out of line with fundamentals before the bust (see Krainer 2004), a broad-based decline in house prices was widely considered unlikely given the behavior of house prices over the post-World War II period. Of course, in a break with history, house prices did collapse, declining some 30% from the 2006 peak for the nation as a whole.

One result of the failure to fully appreciate the severity of the crisis was unusually low levels of pre-reserving relative to eventual loan losses among banks. This Economic Letter examines this underreserving, with a focus on real estate loans. The analysis highlights the limitations of the process banks follow to determine loan-loss provisions in the face of unusually severe economic conditions. It also emphasizes the need to guard against worse-than-expected conditions through higher capital levels, along the lines of the Supervisory Capital Assessment Program, which determined the capital needs of the 19 largest U.S. banking organizations last spring. 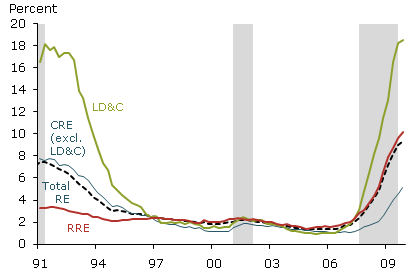 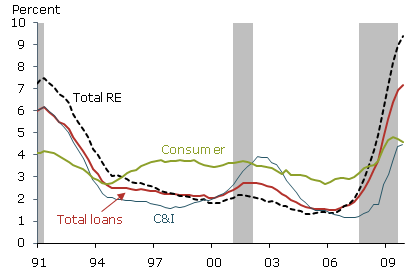 A headline-catching dimension of the recent financial crisis has been the meltdown of the housing market and very high rates of residential mortgage delinquencies and foreclosures. Figure 1 shows ratios of problem, or nonperforming, real estate loans at commercial banks from 1987 to 2009. These are loans at least 30 days delinquent or not accruing interest. The rise in the residential mortgage nonperforming loan ratio over the past two years is unprecedented in the post-World War II period. The residential real estate meltdown also has contributed significantly to a steep rise in problem land development and construction loans, many of which finance home building. The ratio of problem loans in this category has reached levels not seen since the early 1990s. Unlike in the current cycle, however, it was a commercial real estate collapse that drove delinquencies in land development and construction loans in the early 1990s. In the current downturn, commercial real estate also has experienced sharply declining values, with national indexes off on the order of 40%. As indicated in Figure 1, the recent problems in commercial real estate lagged those in the residential sector, not emerging until the onset of the overall economic slump.

The deterioration in the performance of mortgages has been an important driver of overall problem loans at commercial banks. Figure 2 shows that the ratio of total problem loans is higher than in the previous two cycles, including the commercial real estate crisis of the early 1990s. To be sure, the performance of other types of loans at commercial banks also has deteriorated. The ratio of problem consumer loans is high relative to past cycles, reflecting the intensity of the recession for households. By contrast, the rise in the ratio of problem commercial and industrial loans is not unusual.

The incidence of problem residential real estate loans in the current crisis clearly is unusual. The post-World War II experience offers no precedent for the speed of the deterioration of mortgage loans. An active mortgage can be characterized as current when payments are up-to-date, delinquent when one or more payments is past due, or in foreclosure. In addition, a mortgage can be extinguished through prepayment, including refinancing and sale of the property, or by repossession of the property by a lender. Between any two points in time, the status of a mortgage can remain unchanged or move to another status. For example, a current loan can become delinquent, and a delinquent loan can move to foreclosure or become current.

The status of a mortgage depends on both the ability and the willingness of the borrower to keep payments up-to-date. For individuals, the ability to make mortgage payments is affected by life events, such as the loss of a job. This is why aggregate mortgage loan performance is tied to underlying economic conditions. However, research has shown that the single most important factor behind the recent rise in delinquencies and foreclosures has been the sharp decline in house prices, which affects both the ability and willingness of borrowers to keep loans current (see Doms, Furlong, and Krainer 2007). 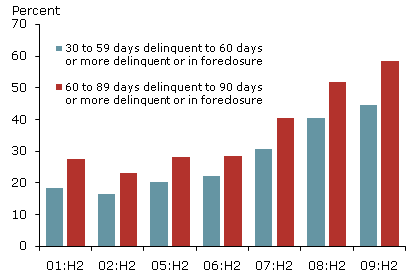 Projections based on past mortgage delinquency transition patterns would have led to a systematic underforecasting of delinquencies in the current crisis. Moreover, given the surprisingly large declines in home values, it was likely that lenders would systematically underestimate ultimate losses on residential mortgages.

Another way to show how much the current crisis differs from the past is to compare loan charge-offs relative to levels of problem loans at commercial banks. First, here is a bit of accounting. In assessing expected loan losses, a bank makes loan-loss provisions, which are recorded as expense items on its income statement. Total reserves against expected losses are recorded as the allowance for loan losses, a contra-asset, that is, an asset with a negative balance, on the bank’s balance sheet. As losses are realized, the bank takes charge-offs, which represent the value of loans removed from the books and deducted from the allowance for loan losses. In a given quarter, a bank can recover some of the value of loans previously charged off. The difference between a bank’s charge-offs and recoveries is its net charge-offs. 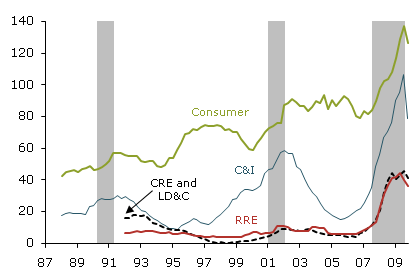 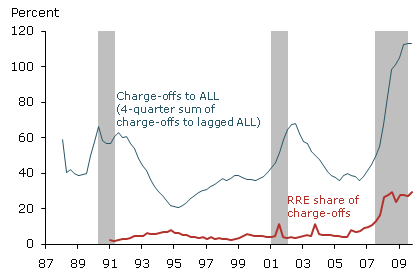 Figure 4 shows the relationships of charge-offs to problem loans for different loan categories. This is calculated by dividing the four-quarter sum of net charge-offs by the level of problem loans prior to the four quarters. This allows for a lapse between when a loan becomes delinquent and when it is charged off. The figure shows that losses relative to problem loans have been consistently higher on consumer and business loans, most of which are not collateralized, than on real estate loans, especially residential real estate loans.

As Figure 5 illustrates, unusually low levels of pre-reserving relative to eventual loan losses among commercial banks is exactly what occurred. The thin blue line represents the four-quarter sum of total commercial bank charge-offs divided by the level of allowances for loan losses prior to the four quarters. As the figure shows, in past downturns, realized losses over four quarters did rise relative to provisioning by banks at the beginning of a given period. This reflects at least two underlying causes. First, accounting conventions tend to limit banks’ ability to set aside provisions against loans that are performing but might eventually be expected to become delinquent. Second, forecasts of the incidence and severity of recessions, sectoral shocks, and, consequently, future loan losses are subject to considerable error. Forecasting in the current cycle has been especially vexing, leading to significant underestimates of the severity of the crisis and much more underprovisioning among banks.

While it’s true that each major type of loan has exhibited unusually large losses relative to problem loans, emphasis is appropriately placed on residential real estate, which accounts for a high share of total commercial bank charge-offs, as shown by the thick red line in Figure 5. Historically, residential mortgages have made up a small fraction of bank loan losses. By contrast, in the current crisis, residential real estate has accounted for as much as 30% of loan losses. Taken as a whole, real estate charge-offs have accounted for as much as 54% of all charge-offs, compared with a high of about 40% in the early 1990s.

The recent financial crisis and recession have painfully demonstrated the vulnerabilities associated with the bank loss-provisioning process. It’s clear that provisioning should be more forward looking. However, even a more forward-looking provisioning process would not have fully addressed bank vulnerability to the extraordinary events of the past few years. By definition, loan loss reserves are designed to absorb expected losses. Even if banks had better forecasts and more discretion in setting reserves, they would probably still be unable to adequately provision against unexpected large economic shocks. Guarding against such shocks is the role of capital. The lesson of the financial crisis is that the buffer against downside risk must come in the form of higher bank capitalization.

This is in keeping with the principles underlying the Supervisory Capital Assessment Program applied to the 19 largest bank holding companies in the spring of 2009 (see Board of Governors 2009). The program tested the financial status of these organizations under much more adverse economic and financial market conditions than expected. In other words, the stress tests focused on what would happen in cases of significant unexpected losses. The results indicated that the level and quality of capital at some banking companies was probably not sufficient to allow them to weather severe economic conditions and still actively provide financial services. Accordingly, these organizations were required to raise capital.

Fred Furlong is a group vice president in financial research at the Federal Reserve Bank of San Francisco.

Zena Knight is a research associate at the Federal Reserve Bank of San Francisco.

Board of Governors of the Federal Reserve System. 2009. “The Supervisory Capital Assessment Program: Overview of Results.” May 7. http://www.federalreserve.gov/newsevents/press/bcreg/bcreg20090507a1.pdf