TIPS and the Risk of Deflation

The low level of inflation and the sluggish pace of economic recovery have raised concerns about sustained deflation—an inflation rate below zero with a general fall in prices. However, the relative prices of inflation-indexed and non-indexed Treasury bonds, which historically have proven to be good measures of inflation expectations, suggest that financial market participants consider the probability of deflation to be low.

The weak economic recovery, high unemployment rate, and recent slowing of inflation to a very low level suggest an increased risk of deflation in the United States (Liu and Rudebusch, 2010). However, the risk is lower if people expect inflation to remain stable at a positive rate. A brief period of negative inflation like the one observed during 2009, which was largely a consequence of dramatic declines in energy prices, should not pose a risk to the economy as long as it is viewed as a temporary phenomenon that does not alter longer-term inflation expectations.

To address this limitation of the Christensen, Lopez, and Rudebusch model, the authors introduce a refinement that allows for time-varying volatility in both indexed and non-indexed Treasury bond yields (2010b). The refined model is much better at capturing deflation risk at the extremes of the probability distribution during the peak of the financial crisis in the fall of 2008 and the subsequent normalization of financial market activity. For this reason, the model is likely to provide a better read on the market’s current view of deflation risk.

The extreme uncertainty at the peak of the financial crisis caused a flight by investors to very safe and highly liquid assets, most notably short-term U.S. Treasury bills. This led to what at the time appeared to be a dislocation in the market for inflation-indexed Treasury bonds, or TIPS. As a result, very unusual price patterns in TIPS yields were observed during this period, as shown in Figure 1. The thin blue line represents the yield difference between the seasoned ten-year TIPS maturing on July 15, 2013, and the new five-year TIPS issued in mid-April of 2008 maturing on April 15, 2013. As these two TIPS securities have close to identical remaining cash flows, they should be trading at close to identical yields. From April 2008 until the failure of the investment bank Lehman Brothers on September 15, 2008, that was the case. The yield spread between the two 2013 TIPS was less than 0.05 percentage point (5 basis points) and occasionally negative. However, in the weeks and months after the Lehman failure, a significant and persistent spread between their yields developed that only slowly retraced. At the peak of the crisis, this spread exceeded 2 percentage points (200 basis points). Needless to say, a dislocation of this magnitude in the TIPS market can seriously distort the inflation expectations readings from breakeven inflation rates.

To understand the spread between seasoned and newly issued TIPS, I focus on an aspect of the TIPS market that did not receive much attention prior to the financial crisis—the value of the deflation protection embedded in the TIPS contract. In the TIPS contract, deflation protection comes from the fact that the investor is paid at maturity the greater of the original principal or the inflation-adjusted principal. But the payout is never adjusted downward, which means that deflation can’t reduce an investor’s principal. When net inflation over the life of a TIPS security is positive, the investor gets the full inflation-adjusted principal. But, when net inflation is negative, no adjustment takes place. The investor gets the original principal, not a smaller amount reduced for deflation. On the other hand, deflation can reduce the TIPS coupon, which reduces the interest payment cash flow to an investor.

One way of illustrating the importance of the TIPS deflation protection is by comparing a security that doesn’t have such protection with one that does. I calculate the five-year par-coupon yield of a seasoned TIPS that has already been adjusted upward so much for positive inflation that payout on maturity is almost certain to be higher than the original principal amount. In such a case, the TIPS deflation protection is irrelevant for pricing purposes. I compare it with the five-year par-coupon yield on a newly issued TIPS for which deflation considerations are important for pricing purposes. The dashed red line in Figure 1 represents the yield spread between the seasoned and newly issued TIPS of the same maturity obtained from the original Christensen, Lopez, and Rudebusch model. Its correlation with the observed spread between the two 2013 TIPS is almost 95%. However, the model-implied spread is consistently below the observed spread, suggesting that the model systematically undervalues the deflation protection. This limitation can be traced back to the model’s assumption of constant yield volatility, which doesn’t account for the high market volatility during the crisis.

In light of this limitation, the authors (2010b) refine the original model by incorporating better volatility measures into both indexed and non-indexed Treasury bond yields. The refined model fits the data better and forecasts Treasury bond yields at least as well as the original model. More importantly, its estimated par-coupon yield spread between a seasoned and a newly issued five-year TIPS (the thin blue line in Figure 1) tracks the observed spread much better than the original model. This suggests that the refined model is more accurately capturing the expected outlook for inflation and the risk of deflation at the extremes of the probability distribution priced into the indexed and non-indexed Treasury yield curves.

I estimate the current inflation outlook using both the original and refined Christensen, Lopez, and Rudebusch models based on weekly data through August 13, 2010. 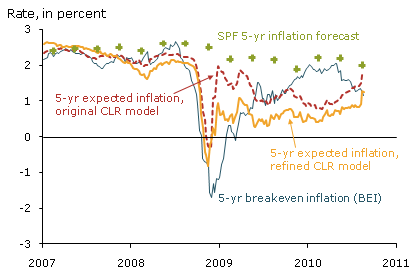 Figure 2 compares estimates from the two models with projections from two other sources. The first is the Survey of Professional Forecasters forecast of the average rate of inflation in the headline consumer price index over the next five years. The measure has two drawbacks. First, it is only available quarterly and, second, it has changed very little over the past three years. Thus, its usefulness as an early warning of deflation risk appears limited. The second measure is the five-year breakeven inflation rate calculated from five-year indexed and non-indexed Treasury yields. It is available daily, or even intra-day. But it has been very volatile over the past two years because risk premiums, including the premium on inflation risk, fluctuated dramatically during the financial crisis. The two Christensen, Lopez, and Rudebusch models address this problem by accounting for variation in risk premiums.

Figure 2 shows that a brief deflation scare occurred in the fall of 2008 that coincided with a dramatic spike in the TIPS yield spread. Figure 2 also shows that bond investor inflation expectations trended lower from the end of 2008 until early 2010. Since then, expectations have trended upward according to both models. Still, expectations in both models are in a range consistent with price stability. Thus, the mean estimates of expected inflation in the medium term suggest only a very limited risk of deflation. 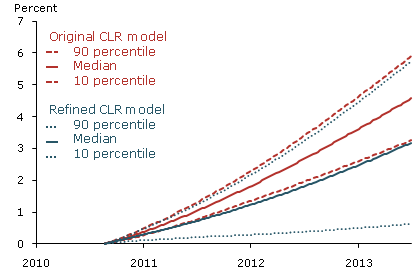 Third, since the beginning of 2009, a systematic wedge has opened between the two estimates. The original Christensen, Lopez, and Rudebusch model has delivered estimates that have been, on average, almost 1% above those from the authors’ refined model.

The recent economic slowdown has raised concerns about the possibility of sustained deflation in the years ahead. However, a refined model of inflation-indexed and non-indexed Treasury bond yields, which captures accurately the possible inflation outcomes perceived by bond investors, suggests that the probability of sustained deflation is just 5.3%. The model accounts accurately for the behavior of inflation-protected Treasury bond yields during the financial crisis and could prove reliable in evaluating deflation risk.

Jens Christensen is a senior economist at the Federal Reserve Bank of San Francisco.