House prices have fallen approximately 30% from their peak in 2006, accompanied by a level of defaults and foreclosures without precedent in the post-World War II era. Many homeowners have mortgages with principal amounts higher than the market value of their properties. In general, though, the rational default point is below the “underwater” point where house price equals the remaining loan balance, and depends on prospects for future house price appreciation and borrower default costs. 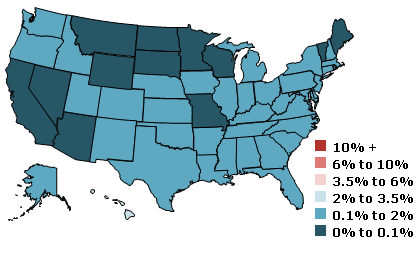 Housing market analysts often explain mortgage defaults as a consequence of life events such as divorce, illness, or job loss. No doubt, such events figure importantly in a borrower’s ability to repay a mortgage. However, except for unemployment, which varies with the business cycle, life events occur with unfortunate regularity. By contrast, mortgage default rates vary substantially over time. It is clear then that life events lead to defaults when they occur in combination with some other factor. It seems most likely that this other factor is a change in house prices. Default and foreclosure are costly for borrowers. They would rather avoid these expenses by selling their houses and prepaying their mortgages instead of defaulting. They can and will do so when house prices are increasing or flat. The default rate increases in periods when house prices have fallen, making mortgage prepayment through resale or refinancing difficult. 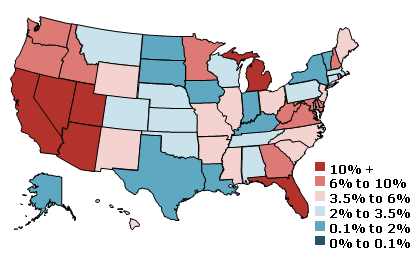 Given the importance of falling house prices as a factor in defaults, it is natural to ask how far they must drop before it serves the borrower’s rational interest to strategically default, that is, to walk away from a mortgage even in the absence of a life event. A common answer is that house prices must fall to a point where the value of the house is less than the remaining loan balance, or when the house is “underwater” (see Thaler 2010, for example). The map in Figure 1 estimates the incidence of underwater first-lien mortgages in 2000. We do not know the actual values of the underlying properties backing these mortgages, but we can estimate the loan-to-value ratios by applying regional house price indexes to the appraised values of the houses at mortgage origination. In 2000, underwater borrowers were a rarity. The share of such borrowers exceeded 2% in just one state—Hawaii. The actual default rate, defined as the incidence of mortgages 60 days past due or in foreclosure, was about 2%.

The 2010 underwater mortgage map in Figure 2 looks very different. Over the intervening period, underwriting standards had shifted and lenders had become more willing to extend mortgages to borrowers who made small down payments. House prices also fell dramatically. The combination of small initial equity stakes and falling house prices produced a sharp jump in the proportion of underwater mortgages. In California, Florida, and Nevada, more than 20% of mortgages presently have principal balances that are greater than the estimated home values.

At what point does it serve a borrower’s rational interest to default? A handy rule of thumb is to use the underwater threshold at which the outstanding loan balance equals the house’s market value as the location of the default point. However, that underwater point is not consistent with rational behavior on the part of the borrower (see Merton 1974 and Krainer, LeRoy, and O 2009). To understand why, consider a homeowner who is at the underwater point, with the house value exactly equal to the outstanding balance of the mortgage. Should this borrower strategically default? We argue that the borrower still has incentive to stay in the house. Going forward, the borrower is in a “heads-I-win, tails-you-lose” position vis-à-vis the lender. If house prices fall further, then the borrower can default immediately, so that declines in house prices translate into losses for the lender. On the other hand, if house prices rise, then the gain accrues to the borrower. With no downside risk, the borrower will not actually be indifferent as to whether to default. Contrary to what many might assume, the borrower will actively prefer not to default. With both upside potential and downside protection against future losses, the borrower rationally should wait before defaulting.

The observation that homeowners will not rationally default as soon as they fall underwater on their mortgages has some powerful implications. First, even though the borrower apparently has no equity in the house because house value is equal to the amount owed on the mortgage, the borrower behaves as though equity were positive by not defaulting. The borrower does not default because the decision to do so is not based on the book, or accounting, value of the homeowner equity, which is zero. Instead, it is based on the economic or “market value” of the equity, which remains positive.

This analysis makes clear that, for rational borrowers, the default decision depends on the market value of equity. The market value of equity in turn will depend on borrower expectations about whether the price of the house will recover, restoring positive equity in a book value sense. It will also depend on the perceived cost of defaulting. The possibility of price appreciation and the costs of default move the rational default point well below the underwater mark. Moreover, the market value of equity hinges on the value of housing services relative to current mortgage payments. For example, suppose that current mortgage payments are low but are scheduled to increase sharply in the future, as with an adjustable-rate mortgage. Equity value will be low if price recovery of the house prior to the mortgage reset date is only a remote possibility. In such a case, default is a high probability. However, the low current payments mean that the cost of maintaining the option by not defaulting is also low. In such situations, borrowers might rationally decide not to default prior to the reset date. If so, equity value, though low, will be positive.

Such an analysis assumes that, when homeowners default, they turn over the keys to the lender with no further obligation or cost. In fact, default brings with it a variety of transaction costs, including moving expenses and the cost of a lower credit rating. Borrowers will factor these costs into their default decisions. Such costs further lower the optimal default point, sometimes by a wide margin. Finally, we are not taking into account life event triggers. If life events impair the ability of borrowers to keep up loan payments, they may have no choice but to default, even though, according to this analysis, it is in their benefit to hold on to their houses. 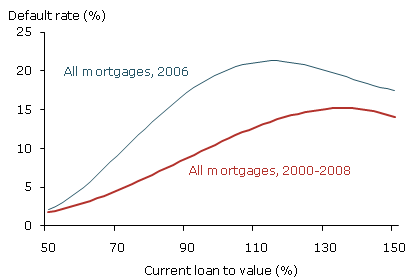 Does borrower behavior resemble the predictions of theory? We examine this question by plotting the default rate as a function of current loan-to-value ratios for a large sample of mortgages originated from 2000 to 2008 (see Figure 3). For a mortgage that is in default, the current loan-to-value ratio is the ratio on the mortgage at the time of default. Mortgages that ended in prepayments or remained current through the first quarter of 2010 are recorded as nondefaulting. The current loan-to-value ratio on nondefaulting mortgages is estimated by dividing the remaining principal balance on the loan by the estimated home value at the end of the history. Here loan to value is a book value concept, not one based on market values, which are theoretically preferable but impossible to measure directly. The terminal home value is estimated by applying a zip-code-level house price index from the Internet real estate service Zillow to the original appraised home value.

Figure 3 shows that, as house prices decline and current loan-to-value ratios rise, the default rate also rises significantly, at least through most of their range of variation. Second, with the exception of the very high loan-to-value mortgages from 2006, default rates rise steadily even as loan-to-value ratios exceed 100%. This is consistent with the notion that falling house prices trigger default only when they drop by more than the amount that wipes out the book value of equity. On average, borrowers wait for prices to decline further before deciding to default.

Default rates actually fall somewhat for very high loan-to-value mortgages. This could be because most borrowers face only moderate default costs and, if they plan to default at all, they do so before loan to value climbs too high. Borrowers who do not default even as loan to value continues to rise may be different from typical borrowers in that they perceive that their default costs are very high.

The figure also makes clear that house price changes alone are not the sole predictor of default. A literal interpretation of the default models described here would hold that all borrowers should strategically default when the value of a house drops below a borrower’s default point. Above this point, no borrower should default. Yet Figure 3 shows positive, though admittedly small, default rates for low loan-to-value loans. The highest default rate is just over 20%, which is for underwater mortgages originated in 2006.

In this Economic Letter, we describe the economic theory detailing how changes in house prices lead to changes in the probability of default. With about 20% of residential property owners underwater on their mortgages, understanding this relationship is vital. One of the key lessons from this area of research is that analysts must be careful in calculating the precise default point on mortgages. We should not expect a discrete jump in default rates once house prices fall to the threshold at which home value equals the remaining book balance on the mortgage. The rational default point depends on a borrower’s expectations regarding future house price changes and perceived default costs. Barring life events, borrowers are likely to stay in their houses until they are well beyond the book value underwater mark. Actual default data confirm many of these ideas. However, more work is needed on this subject. Many borrowers default when they seemingly have no rational incentive to do so, while other borrowers stay current on loans that appear to be irretrievably underwater.

John Krainer is a senior economist at the Federal Reserve Bank of San Francisco.