In the midst of the recent financial and economic crisis, with short-term nominal interest rates essentially lowered to zero, the Federal Reserve started expanding its portfolio of longer-term securities in order to spur economic growth, reduce unemployment, and avoid deflation. However, the Fed’s purchases of longer-term securities have been controversial, in part because of the associated interest rate risk, including the possibility that increases in interest rates will cause the market value of the Fed’s portfolio to fall. For example, former Fed Governor Frederic Mishkin (2010) argued that “major holdings of long-term securities expose the Fed’s balance sheet to potentially large losses if interest rates rise. Such losses would result in severe criticism of the Fed and a weakening of its independence.” This Economic Letter provides a financial assessment of the Fed’s interest rate risk and places that risk in the context of the Fed’s macroeconomic goals for monetary policy.

Responding to the financial crisis that started in August 2007 and the ensuing deep recession, the Fed took extraordinary monetary policy actions. By the end of 2008, the Federal Open Market Committee (FOMC) had reduced the overnight interest rate—the usual instrument of monetary policy—essentially to its lower bound of zero. With no scope for lowering short-term interest rates further, the Fed started to provide additional monetary stimulus to the economy by buying longer-term Treasury and federal agency securities. These purchases reduced the stock of such securities available to private investors and put downward pressure on longer-term interest rates. The Fed’s securities purchases generally supported asset prices and improved credit conditions, thereby helping stabilize the economy (Rudebusch 2009, 2010). 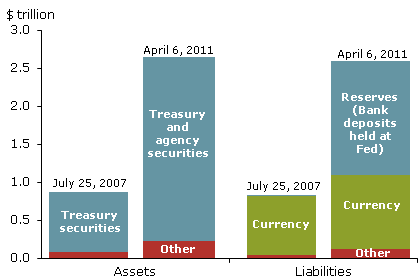 As Figure 1 shows, the Fed’s recent securities purchases have caused its balance sheet to grow enormously. Just before the financial crisis, the Fed’s largest financial asset was about $0.8 trillion in Treasury securities, and its chief liability was a similar amount of currency outstanding in the form of Federal Reserve notes. The Fed now holds about $2.4 trillion in Treasury and federal agency securities. These assets are roughly balanced by a similar amount of currency and bank reserves, which can be thought of as the electronic equivalent of currency.

Although the Fed’s securities portfolio carries essentially no credit risk, its market value can vary over time. Of course, throughout history, central bank balance sheets have contained tradable assets, such as gold, government bonds, and foreign currencies. So financial risks associated with fluctuations in the market prices of central bank assets are nothing new. Still, the increased size of the Fed’s current portfolio could result in unusually large financial gains and losses from market fluctuations. Furthermore, besides producing a larger balance sheet, the Fed’s purchases have shifted the composition of the Fed’s securities portfolio toward longer-maturity securities. Indeed, the duration of the Fed’s portfolio—which is roughly a measure of average maturity—rose from between two and three years before the financial crisis to between four and five years now. The longer duration of the Fed’s portfolio implies that its market value is more sensitive to changes in interest rates. The combination of a larger securities portfolio with a longer duration implies that the Fed is taking on more interest rate risk than usual. 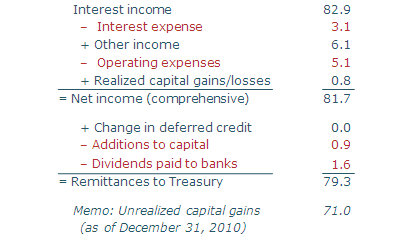 Note: Numbers may not total due to rounding.

The potential quantitative effect of rising short-term rates can be assessed using the Fed’s income statement in Table 1. In 2010, the Fed earned $82.9 billion in interest income, which is equal to an average coupon yield of around 4% applied to a $2 trillion portfolio of longer-term securities. The interest expense for funding these assets last year was only $3.1 billion, which is equal to the Fed’s reserves rate of 0.25% applied to more than $1 trillion in bank reserves. If short-term interest rates were to rise, the Fed’s net interest income would fall as interest expenses rose and its fixed-income earnings changed little. Importantly though, currency, which now represents about 40% of Fed liabilities, has a zero funding cost. So, short-term interest rates would have to rise rapidly to quite high levels—in the neighborhood of 7%—for the Fed’s interest expenses to surpass its interest income. Such an outcome appears very unlikely. Indeed, in the latest Blue Chip consensus forecast, it takes almost five years for short-term rates to gradually inch up to 4% and long-term rates to reach 5%. By that time, bank reserves are likely to be reduced closer to pre-crisis levels, so the Fed’s interest expenses would remain limited.

After accounting for other income and operating expenses, the Fed’s 2010 net income was $81.7 billion. From this amount, the Fed added to its capital reserves and paid dividends to its member banks. It then remitted the remainder—$79.3 billion—to the Treasury. While the Fed has a substantial net income cushion, it must still consider the risk of capital losses on its securities portfolio when long-term interest rates rise. To do this, the Fed values its securities at acquisition cost and registers capital gains and losses only when securities are sold. Such historical-cost accounting is considered appropriate for a central bank that is motivated by macroeconomic policy objectives rather than financial profit and is consistent with the buy-and-hold securities strategy the Fed has traditionally followed. 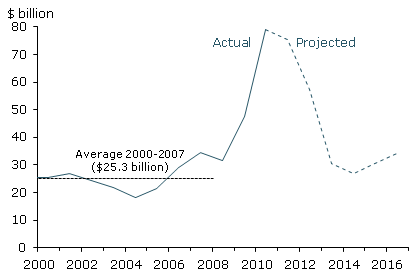 To add it all up, Figure 2 shows the Fed’s remittances to the Treasury over the past decade, which have jumped with the Fed’s enlarged balance sheet, and a plausible illustrative scenario for future remittances. These future remittances are based on net portfolio income projections by the Federal Reserve Bank of New York (2011) using the above Blue Chip consensus interest rate forecasts, a constant adjustment for average operating costs and dividends, and an assumption that gradual securities sales by the Fed commence next year and continue through 2017. Even after accounting for rising interest rates and realized capital losses, the Fed’s payments to the Treasury remain sizable. Of course, it is conceivable that capital losses could reduce the Fed’s net income to zero or even generate net losses. In such unlikely circumstances, the Fed’s capital base would be maintained by letting remittances to the Treasury fall to zero. In the most extreme case, future remittances would also be reduced (and recorded as a change in deferred credit), but the Fed’s capital base and financial position still would remain completely secure.

Costs and benefits of the Fed’s actions

The above financial accounting helps put the broader fiscal costs and benefits of the Fed’s large-scale purchases of securities in perspective. One obvious benefit to the U.S. Treasury (and, by extension, the U.S. taxpayer) has been the additional income received from the Fed. Figure 2 shows that, from 2008 to 2010, the Fed transferred to the Treasury $83 billion more than the 2000–2007 historical average would have predicted. That is, instead of paying more interest to, say, a foreign bondholder, the Treasury paid the Fed, which then returned the funds to the Treasury. A second fiscal benefit from the Fed’s securities purchases followed from the ensuing stronger economic recovery. As longer-term interest rates were pushed lower by the Fed’s actions, the resulting higher output and household income boosted federal tax revenue and reduced federal outlays. Finally, as a third benefit, lower longer-term interest rates also lower the Treasury’s borrowing costs for issuing new debt. These three financial benefits would likely overwhelm any future capital losses that the Fed might realize on its securities holdings, even if short- and longer-term interest rates jumped quite high.

However, it is important to stress that this financial accounting is ancillary to the Fed’s mission. The Fed, of course, strives to be a cost-efficient steward of the public purse. But its statutory mandate for conducting monetary policy is to promote maximum employment and price stability. These macroeconomic goals are the key metrics for judging monetary policy. Financial considerations—even potentially large capital losses—are secondary.

Of course, financial considerations would take on a greater significance if they obstructed the Fed’s ability to implement monetary policy. However, regardless of its income expenses or capital losses, the Fed still has the operational ability to raise short-term interest rates to stem inflationary pressures. In particular, the Fed’s ability to pay interest on bank reserves allows it to conduct monetary policy independently of the size of its balance sheet (Bernanke 2010).

Still, while it is generally recognized that central bank capital losses would not directly impede monetary policy operations, some analysts worry about the attendant political pitfalls (Borio and Disyatat 2010). Large realized or unrealized capital losses could be misinterpreted and subject the Fed to criticism, especially if the losses exceeded the additional interest income from the enlarged portfolio. In the worst case, the political backlash could perhaps threaten the Fed’s operational autonomy. In the past, the Bank of Japan has taken such threats quite seriously and has limited its balance sheet policy actions in part because of a fear that capital losses could tarnish its credibility (Bernanke 2003). Indeed, to insulate itself from such political fallout, the Bank of England obtained in advance an explicit government indemnity for potential future capital losses stemming from its program of large-scale asset purchases. The Fed’s accounting arrangements, as detailed above, automatically provide a similar implicit indemnification. Still, the most effective means for avoiding such criticism likely is to communicate clearly to the public the Fed’s monetary policy objectives and the macroeconomic benefits of its actions.

In its policy actions, the Fed’s primary focus has been on restoring the economy to health and maintaining low inflation. The Fed’s recent securities purchases appear likely to register financial gains, though these are at risk if interest rates rise. However, as then-professor Ben Bernanke (2000) wrote: For a central bank “to allow consideration of possible capital losses to block needed policy actions is misguided.” That is, interest rate risk should be a secondary consideration, subordinate to the macroeconomic goals of monetary policy.

Glenn D. Rudebusch is a senior vice president and acting director of research at the Federal Reserve Bank of San Francisco.

Bernanke, Ben. 2003. “Some Thoughts on Monetary Policy in Japan.” Remarks before the Japan Society of Monetary Economics, Tokyo, Japan, May 31.