Are Large-Scale Asset Purchases Fueling the Rise in Commodity Prices?

Prices of commodities including metals, energy, and food have been rising at double-digit rates in recent months. Some critics argue that Federal Reserve purchases of long-term assets are fueling this rise by maintaining an excessively expansionary monetary stance. However, daily data indicate that Federal Reserve announcements of large-scale asset purchases tended to lower commodity prices even as long-term interest rates and the value of the dollar declined.

The financial crisis that started in the summer of 2007 led to the worst U.S. recession since the Great Depression. Monetary policy makers responded by implementing unprecedented programs to stabilize financial markets and restore economic growth. The Federal Reserve lowered its main policy instrument, the short-term federal funds interest rate, to near zero in a little more than a year and communicated its intention to keep the rate low for an extended period.

Constrained by its inability to lower the federal funds rate below zero, the Fed has also engaged in “unconventional” monetary policy in order to maintain well-functioning markets and provide further stimulus to the economy. These initiatives have included large-scale purchases of mortgage-backed securities and debt issued by Fannie Mae, Freddie Mac, and Ginnie Mae. In addition, the Fed has bought longer-term Treasury securities to lower long-term interest rates.

The Fed started a first round of large-scale asset purchases (LSAPs) at the end of 2008 and completed the program in the first half of 2010. The possibility of a second round of purchases emerged following the Federal Open Market Committee’s decision in August 2010 to reinvest the principal from all its maturing securities. Federal Reserve Chairman Ben Bernanke raised the question of further LSAPs at the Federal Reserve Bank of Kansas City’s Jackson Hole Economic Symposium on August 27, 2010. In November, the FOMC officially announced the resumption of LSAPs.

These actions led to an exceptional increase in the size of the Fed’s balance sheet and raised concerns that the LSAPs could lead to an inflationary surge. Critics of the Fed’s decision to resume LSAP purchases often point to the recent rapid increase in commodity prices as signaling that higher overall inflation will occur down the road. Indeed, commodity prices have surged since Chairman Bernanke’s Jackson Hole speech. The Goldman Sachs Commodity Index, a heavily traded broad index of spot commodity prices, rose 35% between the Jackson Hole speech and the end of February. The increase was widespread, spanning a range of commodity categories. Industrial metals rose nearly 30%, energy prices climbed 35%, and food prices rose close to 50% during the six-month period. 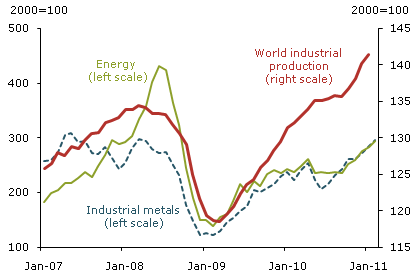 Commodity prices depend on the interaction of supply and demand. For example, extreme weather may have short-term effects on the supply and prices of individual crops. However, the widespread increase in commodity prices in recent months suggests that a common demand factor underlies their recent upward movement. Indeed, as Figure 1 shows, movements in commodity prices are closely tied to world economic activity. Commodity prices declined sharply in the fall of 2008 as the financial crisis intensified and spread around the world, halting global growth. They bottomed out early in 2009 and have since been on an upward trajectory as world economic activity has recovered, driven largely by relatively fast growth in emerging market economies, such as those of China, India, and Brazil. Thus, an increase in the demand for commodities associated with the rebound in world economic activity since early 2009 is a likely major cause of the general increase in commodity prices. In fact, in the two months before August 10, 2010, when the Fed began the process of initiating the second round of LSAPs, commodity prices were already on the rise, with industrial metals increasing 14% and agricultural products 28%.

However, this does not rule out the possibility that expansionary monetary policy in a large country such as the United States may also have contributed to the global rise in commodity prices. Monetary policy can affect commodity prices through several channels. For instance, monetary policy influences interest rates, and rates in turn affect demand for commodities. In the case of LSAPs, Fed purchases of long-term Treasury securities may lower long-term interest rates through the portfolio balance channel. If different assets are imperfect substitutes in investor portfolios, a decline in the relative supply of Treasury securities available to private investors will result in higher prices and lower yields on these assets. The resulting stimulus to aggregate demand can boost demand for all goods, including commodities.

The prices of storable commodities could also rise as interest rates fall because, by decreasing the cost of carrying inventories, lower rates stimulate inventory demand for commodities. Moreover, because most commodities are priced in U.S. dollars, the lower value of the dollar that frequently follows an easier monetary stance would tend to reduce the relative price of commodities for holders of other currencies, also increasing demand. Finally, to the extent that commodity prices are relatively flexible, they may respond to economic developments more quickly than other goods prices. As a result, higher inflation expectations in the wake of looser U.S. monetary policy could be quickly reflected in the prices of commodities that are determined by forward-looking asset market considerations.

All of these transmission channels imply that, if LSAPs cause interest rates to fall, then commodity prices should rise. However, there are other channels through which LSAPs might cause commodity prices to fall. The LSAP announcements about monetary policy may have signaled that the Fed perceived economic conditions to be weaker than previously thought. Alternatively, they may have increased market worries about risk and made Treasury securities more desirable as safe-haven investments. Thus, an announcement that makes investors feel that conditions are worse than originally perceived or that heightens risk concerns may lead investors to increase their demand for Treasuries, lowering their yields. These concerns also could reduce investor demand for other assets, such as commodities, resulting in lower prices. Conversely, if an announcement reduces concerns about risk, then both Treasury rates and commodity prices may rise. Hence, the effects of LSAP announcements could depend crucially on the state of the economy as well as investor sentiment about risk. The early decisions to buy unconventional assets in the fall of 2008 and early 2009 were made during a period of acute financial turmoil and economic uncertainty. The impact of these announcements could very well have differed from the impact of announcements made in the second half of 2010, when financial turmoil had abated, the U.S. economy was stronger, and emerging markets were growing rapidly. Thus, we compare how commodity prices responded during both rounds of LSAP announcements. 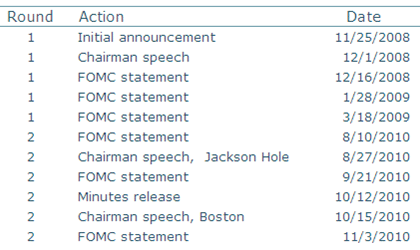 Identifying the effect of recent monetary policy actions on commodity prices and asset prices is a challenging task, partly because these actions were so unprecedented. To isolate the effect of LSAPs, we conduct an event study that documents market movements in commodity prices and other financial variables on days when the Fed publicly announced intended or actual purchases.

Table 1 identifies 11 LSAP announcement days. The first round began on November 25, 2008, when the Fed announced that it intended to buy $100 billion in government-sponsored enterprise debt and up to $500 billion in mortgage-backed securities. The second round began in 2010 with the August 10 FOMC statement that the Fed would continue to roll over its holdings of Treasury securities as they matured, thus avoiding a reduction in the Fed’s balance sheet, and Chairman Bernanke’s Jackson Hole speech on August 27. 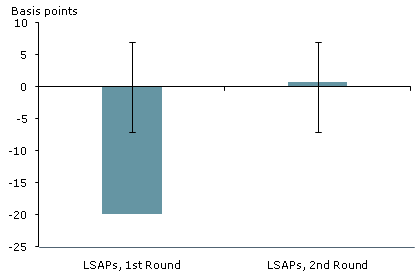 We examine the effects of LSAP announcements by comparing closing market prices on the days of the announcements with closing prices on the previous days for commodities, the 10-year Treasury note, and the yen value of the dollar. A one-day interval around each announcement means that the effects of LSAPs on commodity and other asset prices are less likely to be contaminated by other important news that could move prices. We use the industrial metals and energy subindexes of the Goldman Sachs Commodity Index (GSCI) as our commodity price measures. 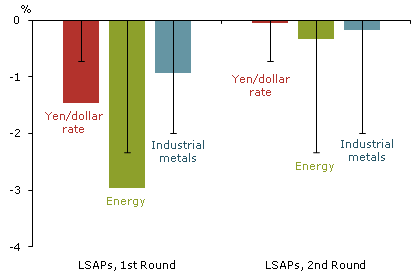 To better understand the monetary policy announcement transmission channel, we first examine the response of the Treasury rate. Figure 2 shows that, during the first round of LSAPs, the yield on the 10-year Treasury note fell an average of 0.2 percentage point (20 basis points) on the days of announcements, and cumulatively by 1 percentage point (100 basis points). This is comparable with the findings of other studies (see, for instance, Gagnon et al. 2011). The yield decline exceeded the average “normal” daily change indicated by the standard deviation of one-day changes from November 24, 2008, to March 17, 2011, a statistical test indicating that the effects were more than random variation. In contrast, the effects of the announcements of the second round of LSAPs have been much smaller. In some cases, the Treasury rate rose. Overall, the Fed’s actions have led to more stimulative financial conditions—more so during the first round of LSAP announcements in 2008–09 than during the second round in 2010.

Figure 3 shows the responses of other asset prices. LSAP announcements tended to lower the U.S. dollar’s value against the yen by about 1.5% on average during the first round of LSAPs and a negligible 0.2% during the second round (see Neeley 2010 for a more exhaustive study of currency effects during the first LSAP round). A larger decline in interest rates and a more pronounced depreciation of the dollar should in theory contribute to a bigger rise in commodity prices. However, what is striking in Figure 3 is that industrial commodity prices and energy prices fell on average on days of first-round LSAP announcements. During the first round of LSAPs, the value of industrial commodities fell on average 0.9% and energy 3% on announcement days. By contrast, during the second round of LSAPs, commodity prices also fell, though only by a marginal amount.

Our analysis does not provide evidence that Federal Reserve large-scale asset purchases fueled the rise in commodity prices. It shows that, despite the fall in long-term interest rates and the depreciation of the dollar, commodity prices fell on average on days of LSAP announcements. The effects were more pronounced during the first round of LSAPs. The results may have occurred because the LSAP announcements heightened investor concerns about risk or led them to revise downward their growth expectations. Thus, other factors, such as growth in emerging market economies, are more likely to be the main drivers behind the recent rise in commodity prices.