Operation Twist and the Effect of Large-Scale Asset Purchases

The Federal Reserve’s current large-scale asset purchase program, dubbed “QE2,” has a precedent in a 1961 initiative by the Kennedy Administration and the Federal Reserve known as “Operation Twist.” An analysis finds that four of six potentially market-moving Operation Twist announcements had statistically significant effects and that the program cumulatively caused a significant but moderate 0.15 percentage point reduction in longer-term Treasury yields. These results can be used to estimate QE2’s effects.

John F. Kennedy was elected president in November 1960 and inaugurated on January 20, 1961. The U.S. economy had been in recession for several months, so the incoming Administration and the Federal Reserve wanted to lower interest rates to stimulate the weak economy. However, Europe was not in a recession at the time and European interest rates were higher than those in the United States. Under the Bretton Woods fixed exchange rate system then in effect, this interest rate differential led cross-currency arbitrageurs to convert U.S. dollars to gold and invest the proceeds in higher-yielding European assets. The result was an outflow of gold from the United States to Europe amounting to several billion dollars per year, a very large quantity that was a source of extreme concern to the Administration and the Federal Reserve.

Similarities between Operation Twist and QE2

In many respects, Operation Twist was similar to the Federal Reserve’s recently announced program of Treasury purchases, dubbed “QE2” by the financial press. First, both programs aimed to lower longer-term interest rates without lowering short-term rates. In the case of Operation Twist, the program sought to prevent further gold outflows. In the case of QE2, lowering short-term rates was not an option because the federal funds rate had already been reduced to its lower bound of essentially zero. Second, both programs involved purchasing large quantities of longer-term Treasury securities. And third, both programs financed those purchases by selling or issuing short-term government liabilities. During Operation Twist, the Fed sold off some of its holdings of short-term Treasury bills. During QE2, it issued bank reserves, which are nearly identical to Treasury bills in that both are short-term liabilities of government agencies—the Federal Reserve in the case of bank reserves and the Treasury in the case of Treasury bills.

Operation Twist was much smaller than QE2 in nominal terms. Nonetheless, as Table 1 shows, the programs are comparable when measured relative to GDP or the Treasury market. First, although Operation Twist was about half as large as QE2 relative to GDP, it was similar enough in magnitude to be informative. Second, if changes in the supply of long-term Treasuries have any effect on long-term Treasury yields, then the initial quantity of long-term Treasury securities in the market should be a better benchmark for the size of each program. By this metric, Operation Twist was closer in size to QE2. Third, to the extent that debt issued or guaranteed by U.S. government-sponsored agencies such as Fannie Mae or Freddie Mac are close substitutes for Treasuries, then the relevant market arguably includes all of these Treasury-guaranteed classes of securities. Relative to this market, Operation Twist was even bigger than QE2.

Estimating the effects of Operation Twist

We estimate the effects of Operation Twist using a high-frequency event-study methodology measuring the one- or two-day response of Treasury yields to major unanticipated announcements regarding Operation Twist. The rationale for this approach is that forward-looking financial markets should quickly incorporate all information from a public announcement shortly after the announcement is made. Moreover, it is intuitively reasonable that financial markets would not leave large profitable trading opportunities unexploited for more than a few hours, let alone one or two days. Jones et al. (1998) and Fleming and Remolona (1999) study the response of Treasury yields to major macroeconomic announcements and find that the yields quickly incorporate information from the announcements with no evidence of over- or under-reaction on the announcement date.

We identified major Operation Twist announcements by searching through the ProQuest Historical Newspapers database for articles in The Wall Street Journal in 1961 and 1962 that mentioned the Federal Reserve or the Treasury. A quick scan of the few hundred articles unearthed this way found several dozen related to Operation Twist. Among these, we identified six 1961 announcements that represented major new Operation Twist developments rather than just summaries or rehashing of the program:

Swanson (2011) provides additional details and discussion of each of these announcements. 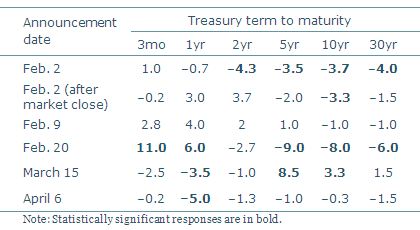 We collected Treasury yields from the Government Securities column of The Wall Street Journal for the market close before and after each of these announcements and used the change in yields to measure each announcement’s effect, summarized in Table 2. The Federal Reserve’s endorsement of Operation Twist on February 20 produced the most dramatic effects. Treasury yields with five or more years to maturity fell 0.06 to 0.09 percentage point (6 to 9 basis points), a highly statistically significant move. Moreover, the three-month and one-year Treasury yields simultaneously increased by 0.11 and 0.06 percentage point (11 and 6 basis points), creating a clear yield curve “twist.” President Kennedy’s introduction of Operation Twist on February 2 also led to a large one-day decline in long-term yields of 0.03 to 0.04 percentage point (3 to 4 basis points). And the Treasury Department’s policy reversal on March 15 led to an increase in longer-term yields, particularly at the five-year maturity for which the Treasury announced that new supply would be forthcoming. 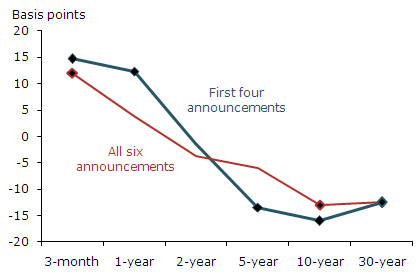 Figure 1 plots the cumulative change in the yield curve at all maturities for the first four and for all six announcements. The cumulative movement at all maturities is completely consistent with a yield curve “twist” and is highly statistically significant, but moderate, amounting to about 0.13 to 0.16 percentage point (13 to 16 basis points) at both the long and short end of the yield curve. Subsequent research (Swanson 2011) found that the spillovers from Operation Twist to agency and corporate bond yields were also statistically significant but smaller, amounting to about 0.13 percentage point (13 basis points) for agency bonds and 0.02 to 0.04 percentage point (2 to 4 basis points) for corporate bonds. Thus, the effects of Operation Twist appear to diminish as one moves away from Treasury securities and toward private credit markets.

We find that Operation Twist lowered long-term Treasury yields by about 0.15 percentage point (15 basis points), an amount that was highly statistically significant, but moderate. This effect is consistent with the extensive time-series analysis of Operation Twist in Modigliani and Sutch (1966) and with the lower end of the range of estimates of Treasury supply effects in the literature (e.g., Gagnon et al. 2011, D’Amico and King 2010, and Hamilton and Wu 2011). A drop in long-term interest rates of this magnitude could be important. For example, 0.15 percentage point (15 basis points) is the typical response of the 10-year Treasury yield to an unanticipated 1 percentage point (100 basis point) cut in the federal funds rate target (Gurkaynak et al., 2005).

Finally, it should be noted that the QE1 program in fall 2008 and spring 2009 differed from Operation Twist and QE2 in several important respects. QE1 was much larger, it purchased primarily mortgage-backed securities, and it took place at a time when financial markets were functioning poorly and were much less liquid. Thus, the financial market effects of QE1 may have been larger than the effects of Treasury purchases in the more normal environments in which Operation Twist and QE2 were conducted.

Titan Alon is a research associate in the Economic Research Department of the Federal Reserve Bank of San Francisco.

Eric Swanson is a senior research advisor in the Economic Research Department of the Federal Reserve Bank of San Francisco.