Has the Treasury Benefited from Issuing TIPS?

While the market for Treasury inflation-protected securities (TIPS) has developed considerably over the past decade, the debate over whether their issuance benefits the U.S. Treasury remains contentious. Information from inflation swap rates in conjunction with a joint model of yields for nominal non-inflation-protected Treasury bonds and TIPS provides evidence that, even under conservative assumptions, the TIPS inflation risk premium has been large enough in recent years to offset the liquidity disadvantage of the series. This suggests that overall the Treasury has benefited from issuing TIPS.

Inflation-indexed debt securities provide bond investors with protection from inflation. They are distinct from regular debt securities in that the principal is adjusted according to changes in a given price index, thereby maintaining the purchasing power of the principal. They also include coupon payments, which reflect the compensation lenders require in addition to preservation of the purchasing power of the principal. From the standpoint of the issuer, if inflation remains positive, the primary motivation for offering inflation-indexed debt is that investors are willing to pay a premium for the protection from inflation these securities provide.

The debate over TIPS has subsided in recent years. But, in a recent paper, Fleckenstein, Longstaff, and Lustig (2010) bring the case for these securities back into question by attempting to document systematic arbitrage opportunities in the market for TIPS that result in notably higher funding costs to the Treasury. They find that the Treasury could have saved tens of billions of dollars if it had financed all its debt using more common and highly liquid non-inflation-protected bonds rather than TIPS. Dudley, Roush, and Steinberg Ezer (2009) argue to the contrary, suggesting that issuance of TIPS benefits the public and policymakers by providing information on inflation expectations and diversifying the Treasury’s portfolio. However, neither paper attempts to quantify the advantageous inflation risk premium or the disadvantageous TIPS liquidity discount.

In this Economic Letter, we build on recent research described in Christensen and Gillan (2011) to provide a conservative estimate of the inflation risk premium. To do that, we deduct the maximum possible TIPS liquidity discount. We make a further correction to adjust for the special liquidity advantage of newly issued nominal Treasury securities. We thereby generate an adjusted measure of the inflation risk premium. This measure has been positive on average since 2005 and represents an overall net gain for the Treasury.

The difference in yields between TIPS and nominal, or non-indexed, Treasury bonds of the same maturity is referred to as breakeven inflation because it is the level of inflation at which investments in indexed and non-indexed bonds would be equally profitable. In addition to the expected inflation component, breakeven inflation is governed by two countervailing factors: the premium bond investors are willing to pay for protection against inflation overshooting its expected path and the discount they require for holding relatively less liquid TIPS in their portfolios. The former pulls TIPS yields down relative to nominal bonds, causing breakeven inflation to rise, reflecting the value investors find in the protection against inflation uncertainty. The liquidity discount pushes yields up, bringing breakeven inflation down, reflecting the compensation investors require for holding securities that may be difficult to sell. Both the inflation protection premium and the liquidity discount can vary over time, making it difficult to separate out the two effects for a given inflation outlook using observed nominal and inflation-protected yields. 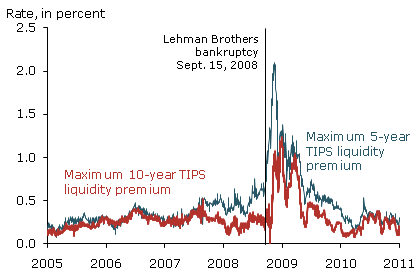 While we do not know the exact level of the liquidity premium within this range, we can be confident that it lies below the upper bound. With this upper bound on the liquidity premium for TIPS in hand, we can construct our conservative measure of the net benefit to the Treasury of issuing TIPS. To do so, we need a model that decomposes breakeven inflation into two components: expected inflation and the risk that inflation may overshoot its expected path, the inflation risk premium.

A joint model of nominal and real yields

We use the term structure model of indexed and non-indexed Treasury yields developed in Christensen, Lopez, and Rudebusch (2010) to decompose breakeven inflation rates (see Christensen 2008 for a short description). The data we use are nominal Treasury yields observed daily over the period from January 3, 1995, to December 31, 2010, with maturities ranging from three months to ten years. We use TIPS yields beginning in 2005 because that is when the inflation swap data becomes available. Thus, the sample includes daily TIPS yields from January 4, 2005, to December 31, 2010, with maturities ranging from five to ten years. 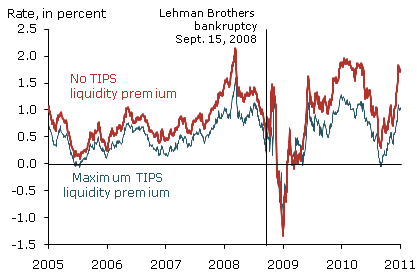 To produce our measure of the benefit of TIPS, we take the smallest admissible inflation risk premium in Figure 2 for each observation date and deduct the maximally admissible TIPS liquidity premium at the ten-year horizon shown in Figure 1. We also deduct the yield spread between the seasoned Treasury yields we use in the model estimation and newly issued Treasuries, shown in Figure 3, to correct for the fact that nominal bonds are issued at very low, so-called on-the-run yields due to their high liquidity. We refer to the resulting measure as the minimum liquidity-adjusted inflation risk premium, which is shown in Figure 4. 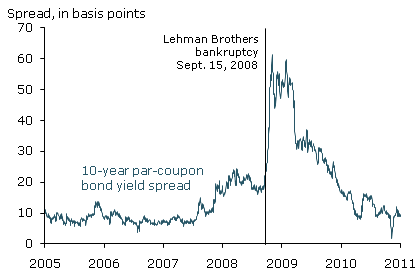 While this liquidity-adjusted measure of the smallest possible inflation risk premium is the most conservative estimate we can generate using the Christensen, Lopez, and Rudebusch model, it is still positive for 63.9% of the sample at the ten-year maturity. The figure shows that during the height of the financial crisis, when the market demand for liquidity and safety was extremely high, issuing TIPS was notably more expensive than funding with nominal Treasury bonds. However, even with that crisis period included, the mean value of the adjusted inflation risk premium was 7.1 basis points (0.071 percentage point), while the maximum was 103.1 basis points (1.031 percentage points). Furthermore, in Christensen and Gillan (2011), we provide evidence suggesting that the TIPS liquidity premium is likely to be in the lower half of the admissible range, far below the value assumed in the calculation above. This is a strong indication that the Treasury has benefited from issuing TIPS throughout most of the six-year sample we consider. 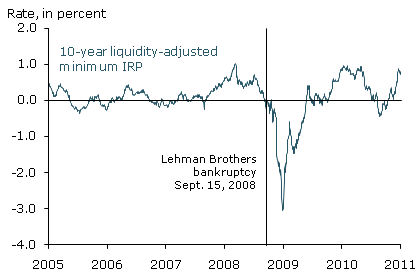 While the market for TIPS has developed considerably over the past decade, the debate over whether their issuance ultimately benefits the Treasury remains contentious. Information from nominal and real Treasury yields can be combined with information from inflation swaps to produce an upper bound to the TIPS liquidity discount. This allows us to estimate inflation risk premiums while accounting for a maximal TIPS yield liquidity correction. Including a further correction for the liquidity differential between on-the-run nominal yields and off-the-run yields used in model estimation provides a conservative measure of the net benefit to the Treasury of issuing inflation-indexed debt. The positive average value of this liquidity-adjusted measure of the inflation risk premium for intermediate- and longer-term TIPS over the past six years supports the continued issuance of TIPS by the Treasury.