Does Headline Inflation Converge to Core?

Zheng Liu and and Justin Weidner 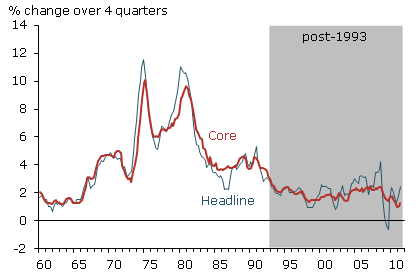 Figure 1 also suggests that the relationship between headline and core inflation has changed since the early 1990s. In the 1960s through the 1980s, deviations of headline inflation from core seem to have been resolved by core inflation catching up with headline. For example, the two episodes of high headline inflation in the 1970s were followed by significant run-ups of core inflation. However, since the early 1990s, core inflation has remained stable despite fluctuations in headline. This observation is confirmed by empirical studies and formal statistical analysis showing that the behavior of inflation has substantially changed since the late 1980s and early 1990s (see Rosengren 2011 for a discussion of this pattern in the consumer price index). For example, Cogley and Sargent (2005) document that, after adjusting for changes in volatility, inflation persistence increased during the 1970s and decreased in the 1980s and 1990s (see also Stock and Watson, 2007).

We perform a statistical experiment on the energy price boom and bust of 2007–08 to examine inflation convergence. Crude oil prices surged from a little over $60 per barrel in the summer of 2007 to over $130 in the summer of 2008 and then plummeted to about $40 by the end of 2008. Reflecting these gyrations, the year-over-year change in headline PCEPI surged from a little under 2.5% in the summer of 2007 to close to 4.5% in the summer of 2008. By the second quarter of 2009, it had plunged to deflationary territory. As headline inflation accelerated steeply in late 2007 and early 2008, core inflation stayed in a range between 2 and 2.5%. Then, in the depth of the recession from the second half of 2008 to 2009, core inflation declined substantially, although not nearly as much as headline inflation. Liu and Rudebusch (2010) argue that this decline was not driven primarily by the collapse in oil prices, but rather by the widening of the unemployment gap, which is the difference between observed unemployment and its potential. 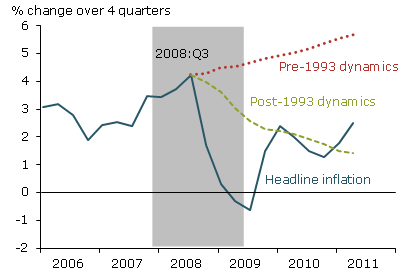 We expect core inflation to remain low and stable for two reasons. First, pass-through from energy and other commodity prices to final consumer prices is likely to be limited. Hobijn (2008) finds that commodity price surges affect the cost of a narrow range of consumer goods and thus have limited direct pass-through to final consumer prices. Williams (2011) argues that the structural and institutional factors that led to runaway inflation in the 1970s, such as automatic cost-of-living adjustments in many labor contracts, are largely absent today. Blanchard and Gali (2007) show that, in contrast with the 1970s, an oil price shock in the past 25 years has caused headline inflation to rise, but nominal wages have shown muted responses. In the first quarter of 2011, wages and labor compensation remained stable despite sharp increases in headline inflation.

If inflation expectations are well anchored and pass-through is limited, then deviations of headline inflation from core should have very little effect on the path of core. To examine whether this hypothesis is supported by data, we estimate a statistical model for core inflation similar to our model for headline inflation. In the core inflation model, changes in core depend on past changes in core and the past difference between headline and core. We find that, in the pre-1993 period, core inflation rises when headline goes above core in the past period. However, since 1993, past deviations of headline from core have had little impact on core inflation. Thus, the post-1993 data are consistent with well-anchored inflation expectations and limited pass-through.

It is possible that inflation expectations could become unanchored. But there is little evidence that such an unmooring has occurred so far. In fact, inflation projections of professional forecasters and measures of expectations derived from inflation-protected securities have been stable. To keep inflation expectations well anchored, the Fed will have to demonstrate continued credible commitment to maintaining low and stable inflation in the medium term.

Justin Weidner is a research associate in the Economic Research Department of the Federal Reserve Bank of San Francisco.

Evans, Charles L., and Jonas D.M. Fisher. 2011. “What Are the Implications of Rising Commodity Prices for Inflation and Monetary Policy?” Chicago Fed Letter 286 (May).

Rosengren, Eric S. 2011. “A Look Inside a Key Economic Debate: How Should Monetary Policy Respond to Price Increases Driven by Supply Shocks?” Remarks to the Massachusetts Chapter of NAIOP, the Commercial Real Estate Development Association, May 4.