Goods and services from China accounted for only 2.7% of U.S. personal consumption expenditures in 2010, of which less than half reflected the actual costs of Chinese imports. The rest went to U.S. businesses and workers transporting, selling, and marketing goods carrying the “Made in China” label. Although the fraction is higher when the imported content of goods made in the United States is considered, Chinese imports still make up only a small share of total U.S. consumer spending. This suggests that Chinese inflation will have little direct effect on U.S. consumer prices.

The United States is running a record trade deficit with China. This is no surprise, given the wide array of items in stores labeled “Made in China.” This Economic Letter examines what fraction of U.S. consumer spending goes for Chinese goods and what part of that fraction reflects the actual cost of imports from China. We perform a similar exercise to determine the foreign and domestic content of all U.S. imports.

In our analysis, we combine data from several sources: Census Bureau 2011 U.S. International Trade Data; the Bureau of Labor Statistics 2010 input-output matrix; and personal consumption expenditures (PCE) by category from the U.S. national accounts of the Commerce Department’s Bureau of Economic Analysis. We use the combined data to answer three questions:

•  What fraction of U.S. consumer spending goes for goods labeled “Made in China” and what fraction is spent on goods “Made in the USA”?

•  What part of the cost of goods “Made in China” is actually due to the cost of these imports and what part reflects the value added by U.S. transportation, wholesale, and retail activities? That is, what is the U.S. content of “Made in China”?

•  What part of U.S. consumer spending can be traced to the cost of goods imported from China, taking into account not only goods sold directly to consumers, but also goods used as inputs in intermediate stages of production in the United States?

Although globalization is widely recognized these days, the U.S. economy actually remains relatively closed. The vast majority of goods and services sold in the United States is produced here. In 2010, imports were about 16% of U.S. GDP. Imports from China amounted to 2.5% of GDP. 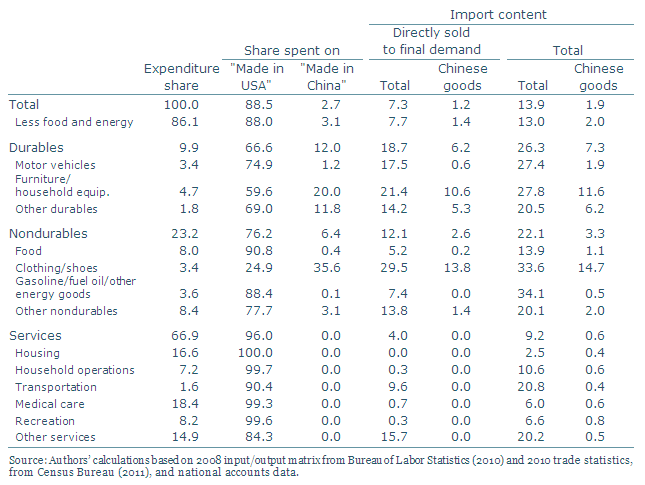 Table 1 shows our calculations of the import content of U.S. household consumption of goods and services. A total of 88.5% of U.S. consumer spending is on items made in the United States. This is largely because services, which make up about two-thirds of spending, are mainly produced locally. The market share of foreign goods is highest in durables, which include cars and electronics. Two-thirds of U.S. durables consumption goes for goods labeled “Made in the USA,” while the other third goes for goods made abroad.

Chinese goods account for 2.7% of U.S. PCE, about one-quarter of the 11.5% foreign share. Chinese imported goods consist mainly of furniture and household equipment; other durables; and clothing and shoes. In the clothing and shoes category, 35.6% of U.S. consumer purchases in 2010 was of items with the “Made in China” label.

Obviously, if a pair of sneakers made in China costs $70 in the United States, not all of that retail price goes to the Chinese manufacturer. In fact, the bulk of the retail price pays for transportation of the sneakers in the United States, rent for the store where they are sold, profits for shareholders of the U.S. retailer, and the cost of marketing the sneakers. These costs include the salaries, wages, and benefits paid to the U.S. workers and managers who staff these operations.

Table 1 shows that, of the 11.5% of U.S. consumer spending that goes for goods and services produced abroad, 7.3% reflects the cost of imports. The remaining 4.2% goes for U.S. transportation, wholesale, and retail activities. Thus, 36% of the price U.S. consumers pay for imported goods actually goes to U.S. companies and workers.

This U.S. fraction is much higher for imports from China. Whereas goods labeled “Made in China” make up 2.7% of U.S. consumer spending, only 1.2% actually reflects the cost of the imported goods. Thus, on average, of every dollar spent on an item labeled “Made in China,” 55 cents go for services produced in the United States. In other words, the U.S. content of “Made in China” is about 55%. The fact that the U.S. content of Chinese goods is much higher than for imports as a whole is mainly due to higher retail and wholesale margins on consumer electronics and clothing than on most other goods and services.

Table 1 also shows total import content as a fraction of total PCE and its subcategories. When total import content is considered, 13.9% of U.S. consumer spending can be traced to the cost of imported goods and services. This is substantially higher than the 7.3%, which includes only final imported goods and services and leaves out imported intermediates. Imported oil, which makes up a large part of the production costs of the “gasoline, fuel oil, and other energy goods” and “transportation” categories, is the main contributor to this 6.6 percentage point difference. 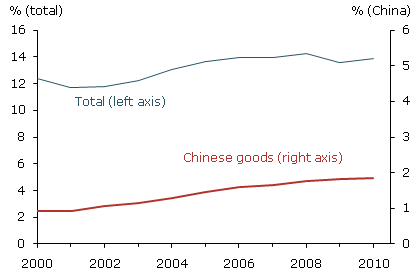 Figure 1 plots the total and Chinese import content of U.S. PCE over the past decade. The import content of PCE has been relatively constant at between 11.7% and 14.2%. Import content peaked in 2008 at 14.2%, which was probably due to the spike in oil prices at the time. The share of imports in PCE is slightly lower than in GDP as a whole because the import content of investment goods turns out to be twice as high as that of consumer goods and services.

The fraction of import content attributable to Chinese imports has doubled over the past decade. In 2000, Chinese goods accounted for 0.9% of the content of PCE. In 2010, Chinese goods accounted for 1.9%. The fact that the overall import content of U.S. consumer goods has remained relatively constant while the Chinese share has doubled indicates that Chinese gains have come, in large part, at the expense of other exporting nations.

The import content of U.S. PCE attributable to imports from China is useful in understanding where revenue generated by sales to U.S. households flows. It is also important because it affects to what extent price increases for Chinese goods are likely to pass through to U.S. consumer prices.

China’s 2011 inflation rate is close to 5%. If Chinese exporters were to pass through all their domestic inflation to the prices of goods they sell in the United States, the PCE price index (PCEPI) would only increase by 1.9% of this 5%, reflecting the Chinese share of U.S. consumer goods and services. That would equal a 0.1 percentage point increase in the PCEPI. The inflationary effects would be highest in the industries in which the share of Chinese imports is highest—clothing and shoes, and electronics. In fact, recent data show accelerating price increases for these goods compared with other goods.

However, it does not seem that so far Chinese exporters are fully passing through their domestic inflation. In May 2011, prices of Chinese imports only increased 2.8% from May 2010. This is partly because a large share of Chinese production costs consists of imports from other countries. Xing and Detert (2010) demonstrate this by examining the production costs of an iPhone. In 2009, it cost about $179 in China to produce an iPhone, which sold in the United States for about $500. Thus, $179 of the U.S. retail cost consisted of Chinese imported content. However, only $6.50 was actually due to assembly costs in China. The other $172.50 reflected costs of parts produced in other countries, including $10.75 for parts made in the United States. 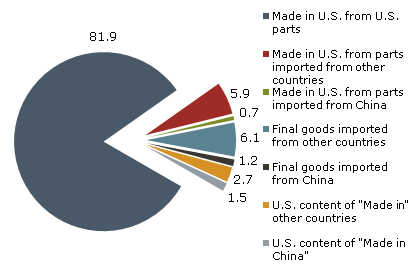 Figure 2 shows the share of U.S. PCE based on where goods were produced, taking into account intermediate goods production, and the domestic and foreign content of imports. Of the 2.7% of U.S. consumer purchases going to goods labeled “Made in China,” only 1.2% actually represents China-produced content. If we take into account imported intermediate goods, about 13.9% of U.S. consumer spending is attributable to imports, including 1.9% imported from China.

Since the share of PCE attributable to imports from China is less than 2% and some of this can be traced to production in other countries, it is unlikely that recent increases in labor costs and inflation in China will generate broad-based inflationary pressures in the United States.