Before the global financial crisis of 2007-2009, the United States and several other countries posted large current account deficits. Many of these countries also experienced asset price booms. Evidence suggests the two developments were linked. Rising asset values in the United States permitted households to borrow more easily to boost consumption, while the net sale of debt securities abroad financed current account deficits. The fall in some asset prices since the crisis can make it easier to reduce current account imbalances.

One of the features of the global economy before the financial crisis of 2007–2009 was large imbalances in the current accounts of the United States and several other countries. In 2006, on the eve of the crisis, the U.S. current account deficit reached 6% of national income. Such deficits are worrisome because they require financing through capital inflows from abroad. These can take the form of debt issues or international sales of domestic assets. Each year’s current account deficit adds to the net debt that the United States owes to the rest of the world. At the end of 2010, U.S. international debt exceeded $2.4 trillion, amounting to nearly $8,000 per person. 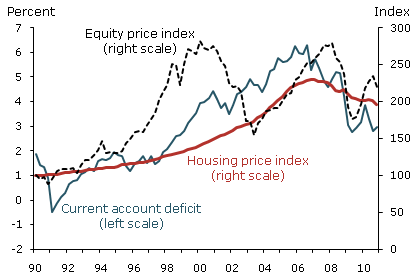 Notes: Current account deficit is measured as percentage of nationalincome. Price indexes are for the United States for 1990–2010. 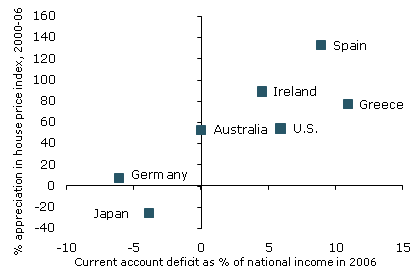 The period during which the U.S. current account deficit grew also saw the prices of certain assets appreciate dramatically. Figure 1 shows the run-up in U.S. housing prices in the years before the financial crisis and the rise in stock prices during the 1990s. Taken together, the housing and stock markets largely account for the trend of increasing asset values, which contributed to rising household wealth. Economists disagree whether this asset appreciation reflected expectations about future economic fundamentals such as productivity gains or were the product of financial bubbles. Here I examine how rising asset prices contributed to the global imbalances expressed in the expanding U.S. current account deficit. It is also notable that these asset prices declined precipitously during the financial crisis in 2008, which coincided with a sharp reduction in the U.S. current account deficit.

What does economic theory say about the association between the current account and asset prices? One linkage suggested by theory is through wealth effects on consumption. The current account equals the gap between total national income and total national expenditure. Therefore, a rise in private consumption relative to income means that more goods are being imported and fewer goods are available for export.

Textbook economic theory holds that households prefer to maintain a smooth level of consumption across time periods. During each period, they consume more or less a constant portion of their expected lifetime wealth. In principle, an increase in the value of an asset raises household wealth and should lead to a rise in consumption. A rise in the value of stock owned by a household means that some of those equities can be sold to finance a higher level of consumption. Similarly, a rise in the market value of the family home means, in principle, that the family can afford more consumption each year. Of course, households are not literally required to sell part of their homes each year to finance extra consumption. Instead, they can take out loans against their houses to extract some of the rising equity to finance higher consumption.

A second potential mechanism linking asset prices and the current account is the role of collateral. It may be that households wanted for some time to borrow to finance more consumption. However, no bank was willing to lend to them because they didn’t have sufficient collateral to secure their debts against default. In such cases, a rise in home values could give households enough collateral to borrow or increase the size of the loans they were eligible for. As households use their borrowing capacity to raise consumption closer to their desired levels, private saving declines and the current account deficit expands. 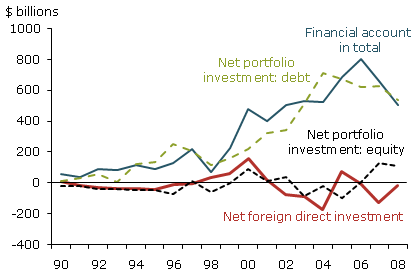 To what degree were households able to cash in on rising asset values by selling or borrowing off of those assets? Figure 3 shows the components of the U.S. financial account, which tracks the sale of assets used to finance the current account deficit. The dramatic rise in total financial inflows in the mid-2000s was tracked almost fully by a rise in international net sales of debt securities, including government and private-issue securities. The other two main categories, direct foreign investment and international net sales of stock, did not rise in similar fashion to finance the rising current account deficit. In fact, net trade in those two categories was negative for most of those years. That indicates there was a net outflow of capital in those two categories. Thus, foreign direct investment and international sale of U.S. equities were not part of the capital inflow that financed the current account deficit.

This pattern reflects the tendency of U.S. investors to purchase higher-risk, higher-yield foreign assets, such as international stocks, while selling lower-risk, lower-yield assets such as debt securities to foreigners. The lower volume of net trade in stock and direct investment suggests that consumers were not able to cash in on rising asset values by directly selling assets in those categories abroad. Rather, it appears that households used their higher-value assets as collateral to gain access to the U.S. financial market and take out loans. Some of those loans made their way overseas in the form of net sales of debt securities.

Paul Bergin is a professor at University of California, Davis, and a visiting scholar in the Economic Research Department of the Federal Reserve Bank of San Francisco.