John Krainer and James A. Wilcox

The prices of houses, like those of other goods and services, are determined by supply and demand. The supply of new and existing houses for sale depends on the prices that sellers expect to receive. Production of new houses also depends on the cost and availability of land, construction labor, and building materials. The demand for houses, which has received far more research attention, is driven by factors such as demographics; household wealth; interest rates; the amenities of the houses themselves, such as age and size; and the features of the neighborhoods in which they are located, such as crime, school quality, and tax rates.

Marketwide measures of these demand factors help account for house prices in general (see, for example, DiPasquale and Wheaton 1994). But, marketwide measures do not consider which households are likely to be “at the margin,” that is, indifferent between buying and not buying a house. It is these marginal demanders who determine the prices of houses. The group of households that is at the margin can change over time as their demand factors change. Because the demand of different groups might well respond differently to changes in demand factors, house prices themselves might move differently depending on which group of households constituted the marginal demanders.

Consider the San Francisco Bay Area real estate market in the late 1990s and early 2000s, when house prices rose by more than 15% annually. Marketwide measures of supply and demand factors generally account for these increases in house prices. However, a more refined analysis might examine whether the enormous increase in technology sector wealth in the Bay Area was especially important in driving house prices then (see Furlong and Krainer 2000).

In this Economic Letter, we consider whether taking into account demand from specific identifiable groups of buyers better explains house prices in a large, but circumscribed market (see Krainer and Wilcox 2011). The Hawaiian real estate market offers an excellent test of this idea. Relatively little of Hawaii’s land is available for housing, which means that changes in demand affect prices, rather than the supply of houses. Demand is strong because many people are attracted by Hawaii’s weather, beaches, and great natural beauty. Because supply is restricted and demand is strong, Hawaiian median house prices have been about three times U.S. mainland median prices.

Hawaii is an isolated island chain in the Pacific Ocean, and, as a result, the Hawaiian housing market is as separate from other real estate markets as it is possible to be. For our analysis, Hawaii also has the advantage of being located between two large and identifiable offshore groups of demanders: residents of Japan and the U.S. mainland. Moreover, Hawaiian houses are not close substitutes for residences in Japan or the U.S. mainland. For Japanese and U.S. mainland buyers, they constitute a specialized second-home market rather than a primary residence market.

We investigate whether the fluctuating economic fortunes of Japan and the United States since 1975 have been systematically linked to the number of houses Japanese and U.S. mainland residents respectively bought in Hawaii and the prices they paid. We consider whether demand from these two groups fluctuated to such an extent that one or the other group, not both groups simultaneously, could be regarded as effectively determining Hawaiian house prices at any given time.

If the economic fortunes of Japan and the U.S. mainland had mirrored each other, it would not be possible to detect whether one or the other group drove Hawaiian house prices. However, the economic performance of Japan and the United States has generally been out of sync. In the middle of the 1980s, land values and stock prices in Japan began to rise sharply, as did the yen/dollar exchange rate. As a result, Japanese households suddenly had much greater wealth, especially when measured in U.S. dollars. However, when Japanese asset values collapsed after the 1980s, the Japanese suffered a major reversal of fortune. By contrast, the U.S. economy grew moderately until the middle of the 1990s. After that, U.S. wealth boomed. Mainland land and asset values rose sharply, driving marked increases in household wealth. Thus, U.S. demand for Hawaiian houses was weak precisely when Japanese demand was strong, and vice versa.

To be sure, full-time Hawaiian residents, not Japanese or U.S. mainland residents, were the largest group of homeowners throughout the period under investigation. We regard the demand for houses of Hawaiian residents as reflecting their wealth and income. These, in turn, have been importantly affected by Japanese and U.S. mainland demand for Hawaiian tourism-related goods and services, including hotels, restaurants, and stores. Thus, house prices in Hawaii were ultimately likely to be determined by demand from one of the two largest groups of offshore purchasers.

Figure 1
Hawaiian house prices and U.S. and Japanese net worth 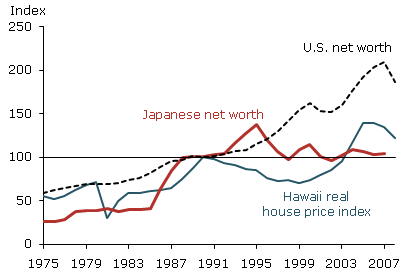 Figure 1 shows that the average, inflation-adjusted price of houses in Hawaii rose considerably in the late 1980s, before declining steadily during the 1990s. House prices then rose by more than 50% in the first half of the 2000s, before retreating through 2008. As already noted, the wealth of potential purchasers is an important factor in the demand for houses. Figure 1 measures wealth by plotting the inflation-adjusted net worth of Japanese and U.S. households. For most of the 1975–2008 period, Hawaiian house prices appear strongly correlated with the wealth of U.S. households, indicating that demand from mainland buyers drove prices. But house prices in Hawaii rose sharply during the 1980s when Japan had its bubble economy, and shortly thereafter. In those years, the U.S. dollar value of Japanese household net worth soared, while U.S. household net worth stagnated. Thus, in the years before and after 1990, Hawaiian house prices showed little correlation with U.S. net worth. Instead, they were highly correlated with the rise and fall of Japanese net worth.

Figure 2
House prices in Hawaii, Japan, and the United States 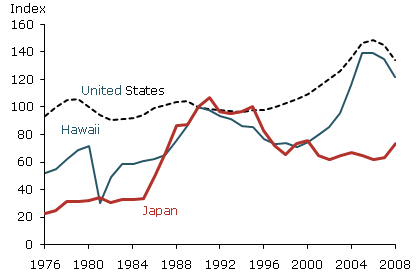 Sources: FHFA and research on land prices by prefectural governments.

We formally tested two models: one that specifies that, in each year, the prices of Hawaiian houses were determined by demand from either Japan or the U.S. mainland, but not both at the same time; and a second model that specifies that house prices were determined by demand from both countries simultaneously (see Krainer and Wilcox 2011). The first can be termed the “either-or” model and the second the benchmark model. The benchmark model reflects the standard perspective that, at any time, the demand of both offshore groups would affect Hawaiian house prices. The either-or model reflects the perspective that houses were sold via auctions in which households from the U.S. mainland and Japan bid for Hawaiian houses.

As the Japanese and U.S. mainland economies and household wealth ebbed and flowed over the 1975–2008 period, buyers from those two regions adjusted the number and size of their bids for Hawaiian houses. In the late 1980s, the Japanese yen appreciated and asset values soared. Japanese households became wealthier relative to U.S. mainland households, and they increased the number and raised the size of their bids for Hawaiian houses. During that period, we conclude that Hawaiian house prices were determined almost entirely by Japanese demand. Later, when U.S. bidders were relatively wealthier, house prices were driven almost entirely by demand from the U.S. mainland.

Figure 3
Ratio of Japanese to U.S. visitors to Hawaii 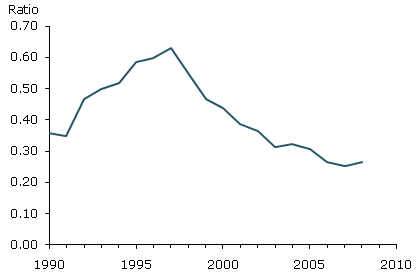 Krainer, John, and James A. Wilcox. 2011. “Regime Shifts in Real Estate Markets: Time-Varying Effects of the U.S. and Japanese Economies on House Prices in Hawaii.” Forthcoming in Real Estate Economics.