Could We Have Learned from the Asian Financial Crisis of 1997-98?

Economists drew a number of lessons from the Asian financial crisis of 1997-98 for preventing such episodes or mitigating their effects. Some of those are similar to lessons drawn from the global financial crisis of 2007-09. But differences in economic development and sophistication of the financial systems of East Asian countries compared with those of the United States and Western Europe made it difficult to apply the lessons of the earlier crisis.

The recent global financial crisis caught many by surprise and prompted economists to look again at past crises going back to the Great Depression and even further. In their 2009 book, Carmen Reinhart and Kenneth Rogoff demonstrated that the U.S. subprime financial crisis was not unique, but rather fit well with historical patterns of financial market booms and busts around the world. In this and other work, they also showed that lessons from past crises could have helped soften the impact of the recent crisis. However, these lessons were formulated after the onset of the 2007–09 crisis, with the benefit of hindsight based on the most recent experience. 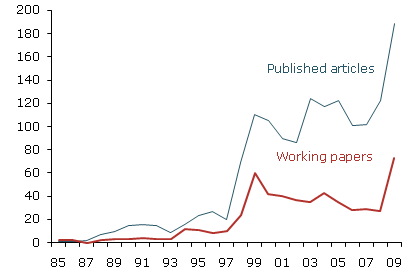 Source: Econlit. Numbers represent the number of items found when searching for “(crisis (or) crash) and (international).”

Not surprisingly, each major economic crisis reenergizes academic literature on the subject of crises. Figure 1 shows the number of academic publications and working papers on international crises from 1985 to 2009. The literature during this period focused on crisis prevention and management, and aimed at drawing lessons that would help avoid or soften the effects of similar crises in the future. The goals of such research were, first, to improve the models designed to predict imminent crises, and, second, to develop policies to minimize losses, speed up recovery, and minimize the susceptibility of a country to crisis, whether it originates internally or spreads through financial and goods markets. Rose and Spiegel (2009), however, show that the recent global financial crisis was hard to predict using early warning models based on the experiences of past crises.

This Economic Letter takes a step back in time and looks at the lessons drawn in the literature written in the aftermath of the Asian financial crisis of 1997–98, the most serious predecessor in recent decades of the current crisis. The Letter examines why those lessons might not be applicable to developed economies. It focuses on policies that, following the Asian financial crises, were thought to prevent similar crises, or at least mitigate their economic effects and speed up recovery. The Letter argues that, despite many similarities between the Asian financial crisis and the recent global financial crisis, there were also important differences. Those largely had to do with differences in the economies and financial systems of the emerging market countries of East Asia prior to 1997 and those of the United States and developed nations of Western Europe before 2007. Those differences explain why recommendations made to Asian countries following the 1997–98 crisis did not lead to major banking and financial regulatory reform in the developed world.

The following is a brief overview of the Asian financial crisis of 1997–98. A summary of other emerging market crises and comparisons with the Asian crisis can be found in Dornbusch (2001).

Prior to the Asian financial crisis, most East Asian countries fixed their exchange rates to the U.S. dollar and ran current account deficits, which subjected their currencies to downward pressure. At the same time, private banks and large nonfinancial companies in these countries were borrowing large amounts, predominantly in dollars, from foreign banks. As became apparent when the crisis unfolded, East Asian governments implicitly guaranteed these loans. Meanwhile, domestic banks were lending to domestic companies in local currencies. Some corporations in those countries borrowed predominantly in dollars directly from abroad, but collected large shares of their revenue in domestic currency from domestic sales. As a result, borrowers accumulated large currency mismatches on their balance sheets. Their liabilities were mostly denominated in dollars, while their assets were, to a large extent, denominated in domestic currency.

East Asian financial systems were subject to two additional risk factors: maturity mismatches due to liabilities that were predominantly short-term and assets that were much longer term or illiquid, and excessive risk taking. Credit was available from abroad cheaply and in large quantities because of the implicit government guarantees. Banks were running out of low-risk projects to lend to and increasingly were financing riskier projects, thanks to an international lending boom and easy access to credit from abroad.

The date of the onset of the Asian financial crisis can be fixed precisely. On July 2, 1997, speculators attacked the Thai baht by selling off baht-denominated assets. Simultaneously, foreign investors withdrew dollar-denominated loans to Thai institutions. The Thai government was forced to let go of its currency peg. The baht plunged 16% on the day of the attack and lost over 50% of its value by January 1998. In the months that followed, other East Asian countries experienced similar debacles. Financial contagion spread through the region so fast that it was nicknamed the “Asian flu.” Only Hong Kong and China were able to maintain their currency pegs. The Hong Kong Monetary Authority intervened directly in the stock market, while China imposed capital controls.

Because of currency mismatches, bank and corporate balance sheets were under tremendous pressure as asset values declined dramatically relative to liabilities. To make matters worse, amid the speculative attacks, bank access to overseas credit dried up as foreign investors executed a flight to quality. Many overseas bank loans had relatively short maturities and banks were unable to roll them over as they had previously. In short, East Asian countries experienced severe banking crises. Nonperforming loan ratios skyrocketed because of prior excessive risk taking, and most banks had to be recapitalized by their governments. Before the crisis, most governments in the region had balanced or nearly balanced budgets. But the fiscal costs of bank recapitalization led to big deficits, forcing governments to seek funds from the International Monetary Fund (IMF).

The Asian financial crisis came as a surprise to policymakers, investors, and academics alike.  Yet, in hindsight, many agreed not only that the crisis could have been expected, but also that, to a great extent, it might have been avoided.

Investors and policymakers missed some warning signs of unsustainable lending booms, such as high corporate debt-to-equity ratios. In 1996, those ratios were respectively 310% in Indonesia and 518% in Korea. High ratios of short-term debt to central bank reserves, an important measure of a country’s overall external foreign currency liquidity, were another red flag. In 1996, this ratio was 177% in Indonesia and 193% in Korea. However, some symptoms common in previous crises, such as excessive current account and budget deficits, were missing. Importantly, prior to the Asian financial crisis, early warning systems focused on government external finances and ignored private debt stocks that could become public liabilities because of implicit guarantees. For these reasons, the early warning systems did not sound alarms.

Economists formulated a number of policy recommendations aimed at preventing a repetition of Asian-flu-type crises (see Eichengreen 1999, Mishkin 1999, Rogoff 1999, and Roubini 2000). Bank regulators were encouraged to require greater transparency and supervise lending activity more strictly, paying particular attention to currency and maturity mismatches. Some scholars urged that highly leveraged institutions be required to improve risk assessment and reduce leverage ratios. Some argued for capital controls to lengthen the maturity and alter the composition of foreign capital inflows so that more investment came in as equity and less as debt. An international lender of last resort was needed to resolve crises, economists said, questioning whether the IMF could fulfill this role given its limited funds. Economists also called for private-sector contingent credit lines to manage liquidity problems. Private-sector involvement in crisis resolution was held to be vital, given the enormous volume of international capital flows.

Have we learned the lessons?

An informed reader may notice parallels between the lessons drawn from the Asian crisis and the current discussion of policies aimed at preventing a repetition of the global financial crisis of 2007–09. Does that mean that the lessons of the Asian crisis were ignored? Was it believed that those lessons didn’t apply to developed countries? Despite many similarities between the Asian financial crisis and the recent global crisis, there were many important differences between the economies and financial systems of the emerging markets of East Asia prior to 1997 and those of the United States and Western Europe before 2007. These differences may have led policymakers to conclude that an Asian-flu-type crisis was unlikely in the developed world.

A second set of differences stems from the fact that mature financial markets that had been through the Great Depression and the collapse of the Bretton Woods global monetary system were much more resilient to shocks, due to their depth and sophistication, and their supervisory and insurance systems. Developed world financial systems were thought to be able to function safely with less oversight and more leverage. However, as we have learned, reduced oversight and high leverage tend to reduce transparency.

Third, developed world financial systems had proved to be capable of rebounding from external one-time shocks. The Russia/Long-Term Capital Management crisis of the fall of 1998 and the September 11, 2001, terrorist attacks are two cases in point. These events precipitated large temporary declines in asset prices, especially in the United States. But they did not grow into widespread financial market freezes like the one that occurred in the fall of 2008 after the collapse of the investment bank Lehman Brothers.

The differences between the economies and financial systems of East Asia in 1997 and the United States and Western Europe in 2007 were genuine and important. Developed world financial markets were more mature, more sophisticated, and better supervised than markets in East Asia. Yet, despite these differences, the developed world also turned out to be vulnerable to financial crisis. Global financial integration increased dramatically in the decade preceding the 2007–09 crisis (Lane and Milesi-Ferretti 2008), creating channels for the rapid spread of financial contagion throughout the developed world.

Lessons learned from the Asian financial crisis of 1997–98, such as the dangers of high leverage ratios and credit growth, appear to be similar to the ones that emerged in the post-2007–09 policy debate. However, differences in economic development and sophistication of the financial systems of East Asian countries compared with those of the United States and Western Europe led policymakers in the advanced economies to believe that the lessons of the earlier crisis did not apply to them. Moreover, it turned out that mature financial markets were not as resilient to shocks as we thought they were prior to 2007.

Galina Hale is a senior economist at the Federal Reserve Bank of San Francisco.