Consumers and the Economy, Part II: Household Debt and the Weak U.S. Recovery

The U.S. economic recovery has been weak, especially in employment growth. A microeconomic analysis of U.S. counties shows that this weakness is closely related to elevated levels of household debt accumulated during the housing boom. Counties where household debt grew moderately from 2002 to 2006 have seen a moderation of employment losses and a robust recovery in durable consumption and residential investment. By contrast, counties that experienced large increases in household debt during the boom have been mired in a severe recessionary environment even after the official end of the recession.

One of the striking features of the U.S. economic downturn that started in 2007 is that it was preceded by the largest increase in household debt in recent history. The thin blue line in Figure 1 plots the ratio of household debt to income for the U.S. economy over time, where income is measured as compensation and wages. After a steady increase from 1950 to 2001, the household debt-to-income ratio skyrocketed from 2001 to 2007 by more than it had in the prior 45 years. 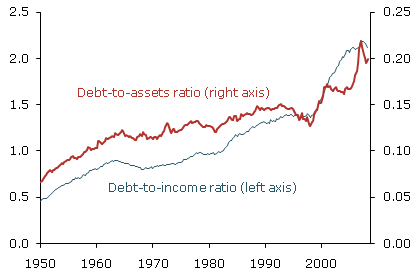 While housing wealth and stock market gains masked the increase in debt from 2001 to 2006, the subsequent collapse of asset prices led to a tremendous increase in the ratio of total debt to total assets in the U.S. household sector, as shown by the thick red line in Figure 1. The ratio of housing-related debt to housing wealth peaked at 65% in 2009, which was 25 percentage points higher than at any time since 1950. The concurrent household default crisis has been catastrophic. Most analysts agree that household defaults sparked the financial crisis of 2007 and 2008. Our research suggests that a high level of household debt was an important factor underlying the recession (Mian and Sufi 2010).

All eyes are now on the economic recovery. By many measures, the nascent recovery is weak, especially in employment. This Economic Letter examines the relationship between the weakness of the current economic recovery and the preceding sharp increase in household leverage ratios. The evidence suggests that high levels of household debt represent an important impediment to growth.

How has the sharp rise in household debt from 2002 to 2007 affected the economic recovery? It is difficult to answer this question using aggregate data alone. Household debt levels are elevated, but many other factors could also be causing weakness. For example, many economists argue that an unwillingness of banks to lend and a lack of business investment are the key impediments to growth.

This Letter analyzes county-level data on household debt and economic activity during the recovery. U.S. counties experienced very different levels of debt growth during the housing boom. Counties where it is difficult to increase housing supply, such as some in California and Florida, experienced much higher increases in household debt than counties where it is relatively easy to increase housing supply, such as in Texas. By using the variation in household debt growth across U.S. counties from 2002 to 2006, we can examine the effect of high debt on residential investment, durable consumption, and employment during the recovery.

Our analysis looks at the 238 counties that have at least 100,000 residents. We split this sample into deciles based on the increase in the household debt-to-income ratio from 2002 to 2006. We focus on the counties in the highest and lowest decile. Most counties in the top decile are in California and Florida, plus one county each in Massachusetts and Virginia. Counties in the bottom decile are in a number of states, including New York, Pennsylvania, and Texas. The county with the largest increase in the household debt-to-income ratio from 2002 to 2006 was Monterey County, California. The county with the smallest increase was Will County, Illinois. We refer to the top decile counties as high household debt counties and to the bottom decile as low household debt counties.

The economic recovery in high and low household debt counties 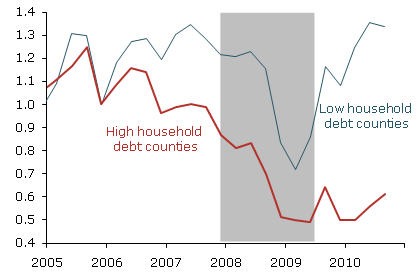 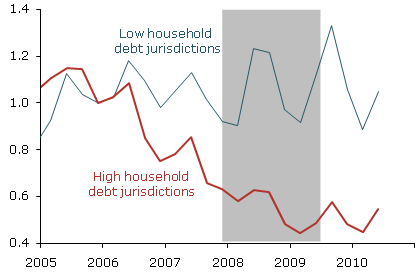 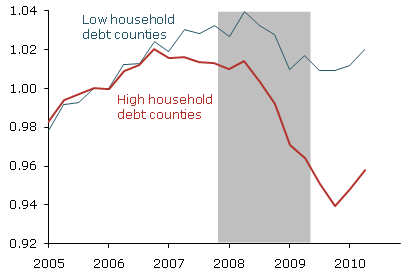 House prices are an important factor. High household debt counties experienced much larger price declines than low household debt counties during the recession. In fact, previous research demonstrates that the debt-to-income increase from 2002 to 2006 can explain more than 60% of the variation in house price declines across U.S. counties from 2006 to 2009 (Mian and Sufi 2010). It is likely that the large increase in debt burdens had both a direct effect on the economy and an indirect effect due to the subsequent sharp declines in house prices in highly leveraged areas.

Why the weak recovery?

What does the evidence on high and low household debt counties suggest about the reasons for the weak recovery? One explanation commonly offered for the weak recovery is hangover from the financial crisis of the fall of 2008. In this view, for a variety of reasons, banks that were embroiled in the crisis are not lending even to businesses that have strong investment opportunities. But it is hard to imagine that businesses in high debt counties have many good investment opportunities when residential investment and durable consumption remain 40% to 60% below pre-recession levels.

A variant of this argument is that local credit conditions are crucial. But this is also difficult to reconcile with the data. In an earlier work, we showed that the correlation between household debt and economic outcomes is the same in counties where national banks are dominant (Mian and Sufi 2010). In other words, even in counties where banks are less affected by local default and consumption patterns, household debt strongly predicts economic outcomes. This strengthens the argument that household debt, not local credit conditions, is the main impediment to recovery.

Overall, the county evidence strongly suggests that credit demand is weak because of an overleveraged household sector. This view is supported by survey evidence that the main worry of businesses is sales, not financing. The October 2010 National Federation of Independent Business survey (Dunkelberg and Wade 2010) shows that almost no small businesses viewed credit availability as their primary problem. In fact, the NFIB has reported that weak sales were the top problem facing small businesses throughout the recession. Weak consumer demand also helps explain the enormous cash balances currently held by U.S. corporations (see Lahart 2010). These results have important policy implications. If the main problems facing businesses relate to depressed consumer demand due to a household sector weighed down by debt, investment tax subsidies and lower interest rates may have a limited effect on business investment and employment growth.

The evidence is more consistent with the view that problems related to household balance sheets and house prices are the primary culprits of the weak economic recovery. King (1994) provides a detailed discussion of how differences in the marginal propensity to consume between borrowing and lending households can generate an aggregate downturn in an economy with high household leverage. This idea goes back to at least Irving Fisher’s debt deflation hypothesis (1933) and has found empirical support in several studies (Mishkin 1978, King 1994, Olney 1999, Eichengreen and Mitchener 2003, Glick and Lansing 2010, and Mian and Sufi 2010). Our view is that the depth and length of the current recession relative to previous recessions is closely linked to the tremendous rise in household debt that preceded it.

Atif Mian is an associate professor of finance and real estate at the Haas School of Business, University of California, Berkeley, and a visiting scholar at the Federal Reserve Bank of San Francisco.

Amir Sufi is an associate professor of finance at the University of Chicago Booth School of Business.