When Will Residential Construction Rebound?

Over the past several years, U.S. housing starts have dropped to around 400,000 units at an annualized rate, the lowest level in decades. A simple model of housing supply that takes into account residential mortgage foreclosures suggests that housing starts will return to their long-run average by about 2014 if house prices first stabilize and then begin appreciating, and the bloated inventory of foreclosed properties declines.

For the past three years, residential construction activity has lingered at its lowest level since the Census Bureau began collecting data in 1963. Since then, the number of U.S. households has roughly doubled to over 110 million. By any yardstick, the collapse of new residential construction has been remarkable. In this Economic Letter, we use a simple model relating housing starts to economic variables such as house price changes, interest rates, construction costs, the overall stock of housing, and other indicators to explore what must happen for housing starts to get back to their long-run average level. 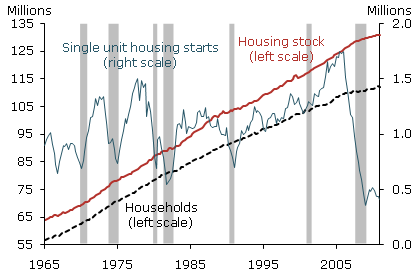 The number of housing units in the United States is currently about 130 million. The stock changes slowly over time as houses fall into disrepair and are destroyed, and as new houses are built to accommodate population growth. The clear upward trend in housing stock reflects the fact that, in the long run, the number is tied to demographics. Households, that is, families or other groupings that live together, tend to form at fairly predictable rates over time. Households require houses to live in. Over the long run, the construction sector delivers new housing at roughly the rate that accommodates population growth.

Even though households tend to grow at a fairly constant rate over time, the pace at which new units are added to the housing stock is anything but constant. Figure 1 shows that housing starts are highly variable, roughly coinciding with the business cycle fluctuations of the economy. The cyclicality of housing starts reflects both demand and supply factors. In a recession, demand can be constrained because household incomes and wealth are low or uncertain, which may discourage young households from taking the major risk of a new home purchase. On the supply side, developers may choose to delay construction if home prices are falling and they believe an economic recovery is far off. Moreover, bank credit standards often tighten in recessions, which can make it difficult for developers to finance new construction, even when demand for housing persists in particular markets.

A simple model of housing supply

Currently, both supply and demand factors are having large negative impacts on housing construction. In this Economic Letter, we concentrate on housing supply. We start with a simple model in which developers decide whether to build housing based on the prices they can obtain for finished homes and the cost of constructing them. Specifically, new single-family home starts are assumed to depend on current changes in real house prices, changes in developer financing costs as measured by the real prime interest rate, changes in a real price index measuring construction costs, and on the overall stock of housing (for more on this model, see Mayer and Somerville 2000 and Wheaton and DiPasquale 1994).

We estimate our model using quarterly, seasonally adjusted U.S. data from the first three months of 1980, which includes the earliest available foreclosure data, through the final three months of 2010. By and large, the model variables are related to housing starts in the expected ways. Current house price changes are positively associated with housing starts, although longer lags in price changes are negatively associated. Cost measures are negatively related to housing starts. The housing stock is positively associated with starts. Statistical tests suggest that, absent changes in the economy, the construction industry adds on average about 0.35% to the housing stock every quarter to keep up with demographics and depreciation. Given the current level of the stock of housing units and absent any changes in the economic variables that we link with starts in the model, we would currently expect to be building about 458,000 new units per quarter, or 1.8 million annually. However, over the past several years, the construction sector has added only about 400,000 units annually. 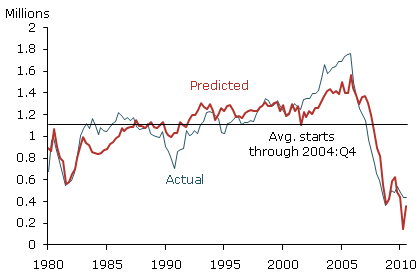 Figure 2 shows that, up to the beginning of the housing boom, the model’s prediction of housing starts fits the data fairly closely. However, around 2005, once the boom was under way, the model becomes unstable. Thus, in Figure 2, predicted housing starts do not rise nearly as strongly as actual starts did in the mid-2000s. Even more interestingly, the simple model does a fairly good job of capturing the initial drop in housing starts, but then incorrectly predicts they would rebound close to their long-run average. This result occurs because the model is designed so that changes in certain variables, such as interest rates and house prices, trigger new housing construction. Most of the variables used to predict housing starts collapsed profoundly in 2007–09, but have changed little since. When these variables stabilized, the model predicted that housing starts would return to their long-run average.

Evidently, a different dynamic is at work in the housing market today than in the past. One variable missing from the model and generally not included in other housing supply models developed prior to the recent recession is a measure of the shadow inventory of houses. These are homes not currently for sale but that could potentially go up for sale in the near future. To account for this factor, we ideally would want a shadow inventory variable that includes housing units that have been recovered by banks and classified as real estate owned, plus houses with borrowers who are in foreclosure or seriously delinquent on their mortgages. Data are not available to construct such a series extending back to the 1970s. Instead, we use Mortgage Bankers Association data on the number of mortgages in foreclosure (see also Mian, Sufi, and Trebbi 2011 for the impact of foreclosures on residential investment). Figure 3 shows that the addition of this foreclosure variable does much to repair the model’s erratic predictions in the post-2006 housing market.

What is needed to return housing starts to a long-run average? 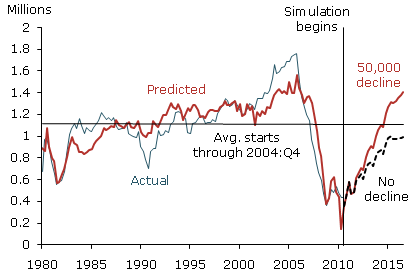 One factor that could potentially accelerate the recovery of housing construction would be an easing of the drag from foreclosures. Figure 4 simulates what would happen if the gradual recovery in real house prices is accompanied by a drop in the inventory of foreclosed homes of 50,000 per quarter starting in 2012. This is an optimistic scenario for two reasons. First, the foreclosure inventory is still growing. Second, the scenario has the stock of foreclosures declining from its current level of about 2 million units at roughly the same rate that foreclosures increased starting in 2006. In our model, if the foreclosure inventory is worked off at this rate and house prices change as described above, then housing starts are predicted to return to normal levels by the beginning of 2014.

In this Economic Letter, we have estimated a model of housing supply and explored what would have to happen for housing starts to return to the levels that prevailed before the housing boom. Of course, increased demand for housing could drive up starts. Demand for housing could rise as a result of an improvement in the job market, growing confidence in the recovery, an entry into the market of households that have delayed homeownership, or any combination of these factors. These demand factors affect real house prices, which in turn influence the rate of housing starts. However, in our model, the source of house price appreciation is unimportant. Our analysis suggests that even an unusually strong period of real house price appreciation would not, on its own, lift starts to long-run average levels. The model indicates that a significant easing of the drag on housing stemming from the inventory of foreclosed homes is also needed. To be sure, our analysis is done at the aggregate level. Although house prices have behaved relatively similarly across regions, foreclosures and the shadow inventory of houses potentially subject to foreclosure are heavily concentrated in certain states. Thus, the outlook for housing starts is better than the aggregate in some local markets and worse in others.

William Hedberg is a research associate in the Economic Research Department of the Federal Reserve Bank of San Francisco.