Small businesses have long had less access to credit than large businesses. Large enterprises have traditionally been able to borrow both from banks and from the broader credit markets by issuing bonds, commercial paper, and other debt securities. By contrast, small businesses generally could not access these broader credit markets and were generally regarded as “bank dependent.” Small business lending was long the province of smaller community banks and finance companies. Small businesses tend to have less collateral, shorter track records, and less verifiable financial statements than large businesses. These financial market frictions may have impinged on smaller businesses’ borrowing, even from community banks.

Perhaps because of such frictions, small businesses often turn to sources other than banks and finance companies for credit. Federal Reserve surveys indicate that traditional bank loans substantially fund small businesses. But the surveys also show that small businesses rely heavily on other sources of funds, including personal and business credit cards; residential mortgages and home equity loans; and family and friends.

The boom in securitization

Over the past three decades, enormous volumes of loans have been securitized. Securitization is the process of amassing a large number of a given category of loans into a pool and then issuing groups of securities that can differ by maturity or credit quality. Payments to securities holders are funded from the payments that borrowers make on loans in the pool. A wide variety of consumer loans are regularly securitized, including first and second residential mortgages, car and boat loans, credit card balances, and student loans. These asset-backed securities (ABS) can be tailored to match investor needs. This encourages investors to make more credit available to borrowers through ABS purchases. In contrast to the widespread securitization of consumer credit, securitized pools consisting solely of small business loans (SBLs) are relatively rare, perhaps because it is difficult to deal with the great heterogeneity in business loans and in the collateral that might be repossessed in the event that those loans default. 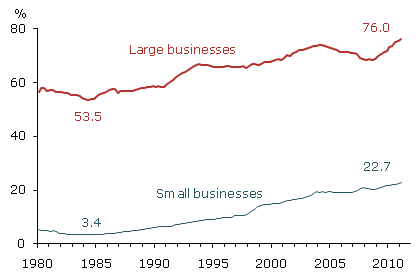 Source: Board of Governors of the Federal Reserve System and author’s estimates.

We do not know when a particular credit card or mortgage loan is used to fund a small business or what fractions of those loans are sold by the originators. However, we can make some overall estimates. Figure 1 shows my preliminary estimates from 1980 through the first quarter of 2011 of the aggregate percentages of large and small business debt obtained from the broader credit markets. Such credit may be obtained directly, such as by issuing commercial paper or corporate bonds, or indirectly, such as by issuing commercial mortgages that are securitized. To obtain these estimates, I assumed that noncorporate businesses had the same proportion of multifamily and commercial mortgages securitized as corporate businesses did. These estimates also included data for credit from finance companies. Commercial mortgage-backed securities, including multifamily mortgages, accounted for over 90% of my preliminary estimate of total credit provided by the broader credit market to small businesses.

Figure 1 shows that the percentages of large business debt associated with the broader credit markets have exceeded 50% at least since 1980 and since then have risen fairly steadily to 76%. By contrast, small businesses historically were much less connected to the broader credit markets. In the middle of the 1980s, less than 5% of their debt was owed on loans that tended to be securitized. However, by the mid-2000s, that share had grown to over 20%.

Large businesses have long been able to borrow by issuing corporate bonds, commercial paper, or leases, or by taking out syndicated loans. When credit markets nearly shut down during the financial crisis, large businesses faced extraordinarily tight credit conditions. So did small businesses. Because small businesses relied so heavily on securitized consumer, residential real estate, and commercial real estate loans for funding, they were vulnerable to the breakdowns of these markets.

Medium-sized businesses may have initially been less affected. They were typically too large to rely heavily on the types of securitized credit used by small borrowers, such as personal or business credit cards, residential loans, or personal loans. And they were too small to access broader credit markets by issuing bonds or commercial paper. Typically, they relied less on the broader credit markets, either directly or indirectly, and more on banks. Often, they had close banking relationships because of previous borrowing and other activities. Other research suggests that such relationship lending can partially insulate firms in a financial crisis (see Monferra and Sampagnaro, 2011).

Securitization and relationship lending may help answer an apparent puzzle. Why did banks and small businesses report that credit was so much tighter, while bank data showed relatively small declines in outstanding SBLs during the financial crisis? Fed surveys registered a record tightening of bank loan underwriting standards during the crisis and the National Federation of Independent Business recorded its lowest readings ever for loan availability. At the same time, bank small business loan portfolios shrank less than 2% in the year ending June 2009.

Figure 2
Credit issued since the crisis 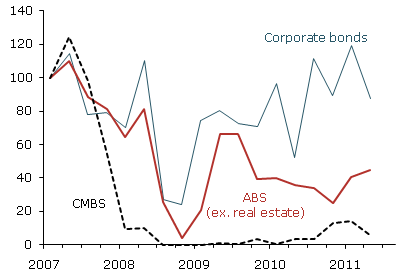 Since the onset of the crisis, the credit environment for smaller nonfinancial firms has been much different than for larger nonfinancial firms, due partly to the decline in the values of commercial real estate and the meager rebound in CMBS securitization. Figure 2 shows recent issuance of corporate bonds, CMBS, and non-real-estate ABS. New issues of corporate bonds, an important credit source for large businesses, dropped sharply in 2007 and 2008 before recovering somewhat. While corporate bond issuance has yet to consistently surpass its 2006–07 peak, its average during 2010–11 was higher than it was before the pre-crisis credit boom.

The figure also shows that ABS issuance collapsed during the crisis. Issuance rebounded after 2008 to about half its 2007 level. The ABS 2009 recovery was probably due in part to the Fed’s Term Asset-Backed Securities Loan Facility program, which provided loans to ABS investors. The recovery may also have reflected the fact that these securities were backed by assets other than real estate, such as vehicles.

Figure 2 also shows that, during the crisis, CMBS issuance—the chief avenue through which small businesses connected to the broader credit markets—halted almost completely and has remained virtually nonexistent since. Declines in residential and commercial real estate prices and uncertainty about future prices may continue to reduce investor willingness to fund loans collateralized by real estate. Thus, small businesses may find that their real estate collateral won’t support the volumes of credit they used to, at least in the immediate future.

Although credit analysts have long advocated securitization of small business loans, pools consisting solely of SBLs have been rare. Despite this, small businesses have found ways to access the broader credit markets through securitized real estate, credit card, vehicle, and other loans.

Diversification often reduces the vulnerability of small businesses to disruption of any single source of credit, whether from banks or segments of the broader credit markets. While diversification of credit sources has some benefits, it cannot completely shield borrowers from a widespread financial crisis. In the recent crisis, funding from banks and the broader credit markets were both disrupted. To the extent that smaller businesses had become more connected to the broader credit markets, they may have faced tighter credit conditions than their medium-sized counterparts. Moreover, to the extent that corporate bond markets returned to normal after the crisis, the credit disruptions faced by many large businesses ended sooner than the disruptions faced by small businesses. Recognition of the particular vulnerabilities of small business to financial crises is vital if we are to develop effective credit maintenance policies, such as public loan guarantees.