Monetary Policy When One Size Does Not Fit All

The European Central Bank recently raised its target interest rate for the first time since the 2008 financial crisis. When compared with a simple interest rate rule, this rate hike appears consistent with the euro area’s nascent economic recovery and rising inflation. However, economic conditions vary greatly among the countries in the euro area and the ECB’s new target rate may not be suitable for all of them.

During the 2008 financial crisis, several central banks, including the European Central Bank (ECB), reduced their target rates to historically low levels in response to deteriorating economic conditions, including rising unemployment and severe disruptions in financial markets. Recently, the ECB reversed course. At its April 2011 meeting, it announced the first increase in its target rate since the crisis, a 0.25 percentage point (25 basis points) rise to 1.25%. Given the economic turmoil in several countries of the European periphery, the question is how this increase might affect different euro-area members. This Economic Letter looks at the ECB move in the context of a Taylor rule, a widely used guideline for monetary policy rates. A standard Taylor rule is applied to the euro area and its member countries, and the policy rates predicted by this rule are compared with the ECB’s target rate path.

The Taylor rule is a policy guideline that generates recommendations for a monetary authority’s interest rate response to the paths of inflation and economic activity (Taylor 1993). According to one version of this rule, policy interest rates should respond to deviations of inflation from its target and unemployment from its natural rate (Rudebusch 2010). A simple version of this rule is:

The target rate recommended by the rule is a function of the inflation rate and the unemployment gap. That gap is defined as the difference between the measured unemployment rate and the natural rate, that is, the unemployment rate that would cause inflation neither to decelerate nor accelerate. The literature shows that this simple rule or close variations approximate fairly well the policy performance of several major central banks in recent years (see Taylor 1993 and Peersman and Smets 1999).

To analyze recent ECB interest rate movements, I apply the version of the Taylor rule described above to the euro area’s unemployment gap and inflation. I then compare the target rate recommended by the Taylor rule with the ECB’s actual policy rate. For comparison, I do a similar exercise for the Federal Reserve. 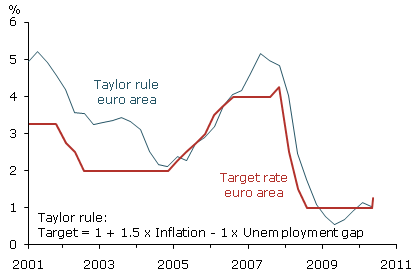 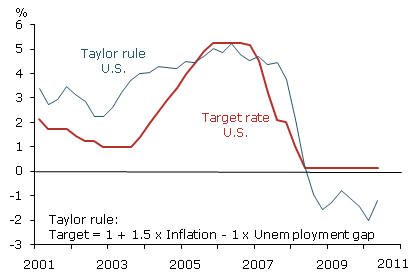 Core inflation levels in the United States and the euro area have been similar. But the U.S. unemployment gap is about twice as large as the euro area’s gap, a sign that the European economy is recovering faster from recession than the U.S. economy. The larger U.S. unemployment gap is the main reason why the Taylor rule policy rate recommendation for the United States is lower than its recommendation for the euro area. 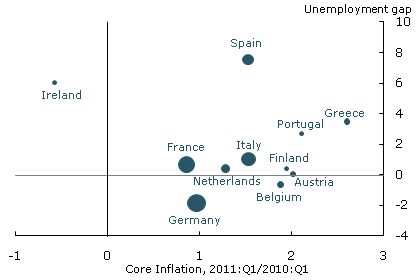 Sources: International Monetary Fund and OECD.
Notes: Size of dots indicate country share of total euro-area GDP. OECD provides only the nonaccelerating inflation rate of unemployment for the above countries in the euro area.

A simple Taylor rule could be applied to each euro-area country individually to generate a policy interest rate recommendation for that country. However, for simplicity, I designate member countries as part of either the euro area’s core or periphery. I then look at Taylor rule interest rate recommendations for those two groups. Each country is weighted according to the size of its real GDP. The peripheral group is made up of Greece, Ireland, Portugal, and Spain, while the core group consists of the previously mentioned core countries plus Italy. Although Italy is often categorized as a peripheral country, its inflation rate and unemployment gap are more comparable to the euro area’s core countries. 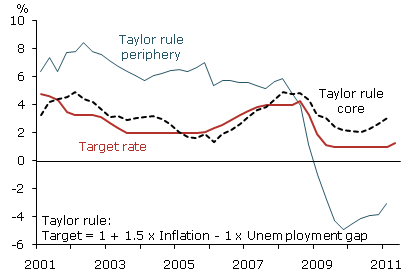 When members of a monetary union are experiencing different macroeconomic conditions, a single policy rate is unlikely to fit circumstances in all countries. Currently, the ECB’s target rate seems to be in line with a Taylor rule recommendation for the euro area as a whole. However, economic differences between peripheral and core euro-area countries are sharp. The core countries are recovering, while the peripheral countries still have large unemployment gaps. Thus, the ECB target rate is not in line with Taylor rule recommendations for the peripheral countries.

For the euro area as a whole, the Taylor rule fit has been quite good since 2005, as it has been for the United States. This is not to say that the Taylor rule necessarily indicates optimal policy. Rather, it can be viewed as a “rule of thumb” that has matched ECB policy well over some periods. But the wide gaps in the Taylor rule’s current recommendations for the euro area’s core and periphery show that one size cannot fit all when economic conditions in two regions of a monetary union are so markedly different.

The euro area’s problem of a “one-size-fits-all” monetary policy is not unique. In the United States, economic conditions have frequently differed dramatically across regions. The Federal Reserve does not set different monetary policies for different parts of the country. Nevertheless, the tensions over monetary policy in a union of many separate countries are likely to be greater than tensions in a single country. The United States can rely on its relatively high labor mobility and on fiscal policy to counter economic weakness, for example, options that may not be fully available to the euro area’s heavily indebted peripheral countries.