Stress testing was a potent tool in the supervision of bank capital during the financial crisis. Stress tests can enhance supervision of bank capital by providing a more forward-looking and flexible process for assessing risks that might not be fully captured by risk-based capital standards. The level and quality of capital among large banking organizations has increased notably since the introduction of stress tests during the financial crisis.

The recent financial crisis raised concerns about bank capitalization, especially among the largest institutions. This is noteworthy given that, even at the height of the crisis, virtually all of the largest banking organizations exceeded general supervisory capital requirements. To assess the capital positions of the largest U.S. banking organizations, the federal supervisory agencies carried out the Supervisory Capital Assessment Program (SCAP) stress tests in the spring of 2009 (see Board of Governors 2009). Stress testing is a forward-looking exercise assessing the ability of targeted financial institutions to weather the effects of unusually adverse economic and financial market developments on their revenues, asset valuations, and loan losses. The Dodd-Frank Wall Street Reform and Consumer Protection Act calls on federal supervisory agencies to conduct stress tests on large financial institutions. Those institutions will also be required to conduct their own stress tests.

This Economic Letter discusses the place of bank stress testing in the broader supervision and regulation of bank capital. Since 2009, the capital ratios of large U.S. banking organizations, including both those that participated in the stress tests and those that did not, have risen well above previous supervisory benchmarks. This widespread strengthening of bank capital signals a significant shift in views about required levels of capitalization in the post-crisis environment.

Regulatory capital ratios are the most transparent dimension of the supervisory process for assessing bank capital. The most prominent measure of regulatory capital is tier 1 capital, which includes the book value of common equity, with some deductions, and certain classes of preferred equity. Total capital includes tier 1 capital plus other supplementary forms of capital, such as subordinated debt and intermediate-term preferred equity. A bank’s supervisory risk-based capital ratios are measured by dividing the different types of capital by the level of risk-adjusted assets. Assets are adjusted by applying risk weights to different categories of balance sheet assets. Off-balance-sheet exposures are also taken into account. Risk-based capital ratios plus the leverage ratio, which is the ratio of tier 1 capital to the book value of assets, are disclosed in quarterly public regulatory filings.

Current regulatory standards provide that tier 1 capital must equal at least 4% and total capital 8% of total risk-weighted assets. However, supervisors expect banks to maintain capital ratios above these minimums. A necessary condition for a bank to be considered well capitalized is that it maintain at least a 6% tier 1 capital ratio and 10% total capital ratio. Even banks that meet those benchmarks might not be viewed as well capitalized for a number of reasons, such as a supervisory judgment that the bank’s capital planning and risk management processes are deficient. Moreover, banking organizations typically set internal capital targets with buffers above supervisory benchmarks.

Bank capitalization before the crisis 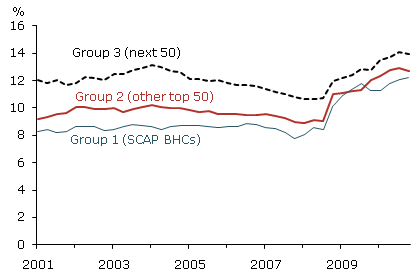 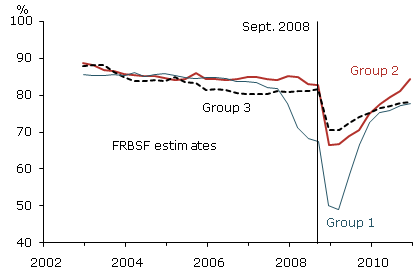 The increased supervisory emphasis on bank capital in the 1980s and 1990s was accompanied by a notable increase in capitalization. The banking sector entered the new millennium with what appeared to be relatively strong capital. Figure 1 plots the weighted average tier 1 ratios for three groups of bank holding companies. Group 1 includes 18 large U.S. banking organizations that participated in SCAP in 2009. Group 2 includes the other publicly traded bank holding companies ranked in the top 50 as measured by the book value of assets. The third group includes the next 50 bank holding companies. Through mid-2008, the tier 1 ratio for Group 1 averaged 8.5%. The ratios for the other two groups were even higher. Consistent with supervisory guidelines, tier 1 common equity accounted for most tier 1 capital. Figure 2 plots estimated ratios of tier 1 common equity to tier 1 capital for the three groups.

Unfolding of the crisis 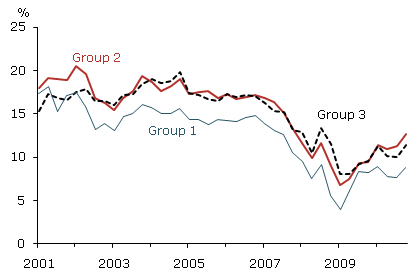 Amid an intense crisis environment, Congress authorized the $700 billion Troubled Asset Relief Program (TARP) in October 2008. To help bolster confidence in the banking system, the Treasury Department used TARP funds to buy preferred equity, counted as tier 1 capital, from large bank holding companies. Figure 1 shows that TARP funding boosted the average tier 1 ratio for the largest banking organizations in the fourth quarter of 2008. TARP funding was subsequently made available to other banks and Treasury’s overall investment in the sector eventually reached $245 billion. Nonetheless, market confidence in banks continued to slip through early 2009.

One reason for concern was that measures of common equity were not faring as well as tier 1 capital as a whole, especially at the very largest banking organizations. Figure 2 shows that, even before the injection of TARP funds, the quality of large banking organization tier 1 capital was deteriorating. In the fourth quarter of 2008, as preferred equity was rising thanks to TARP, tier 1 common equity was falling because of rising losses and deteriorating asset quality. Another concern was that the supervisory capital ratios were not sufficiently forward looking. Book values of bank capital can be affected by accounting rules for provisioning against expected losses. Furlong and Knight (2010) show that, under accepted accounting rules, commercial bank realized losses on loans were extraordinarily high in recent years relative to provisioning for loan losses. This underprovisioning for losses effectively overstated bank assets and capital.

Another source of worry was uncertainty around the ultimate extent of bank losses. The degree of uncertainty about asset values and the economy is directly relevant to assessment of capital. From a supervisory perspective, the role of capital is to absorb unexpected losses. A bank’s level of capitalization determines its capacity to weather higher-than-expected losses. The nation was facing the deepest recession and the most severe financial crisis since the Great Depression. Supervisory capital requirements were not calibrated to meet this “hundred-year storm” hitting the economy. By the end of 2008, the question was whether the largest banking organizations had enough capital to face extraordinary losses, even though they appeared to meet regulatory capital guidelines.

To address this question, the Federal Reserve and the other federal banking agencies implemented horizontal stress tests of the largest banking organizations. SCAP was carried out for the 19 largest bank holding companies in the spring of 2009. The program was unprecedented in scope, but consistent with the longstanding supervisory practice of relying on more than reported ratios to assess capital adequacy. SCAP tested large banking organization financial prospects under a baseline scenario in line with consensus economic forecasts. The baseline scenario provided more forward-looking and realistic expected loss estimates than loss provisions based on accounting rules. The tests also considered a worse-than-expected economic and financial scenario to evaluate how banks would fare if they incurred significant unexpected losses.

Importantly, the stress tests permitted supervisors to communicate their expectations regarding what “weathering” the more adverse scenario meant. Under financial and economic conditions that were more adverse than expected, a bank needed a level and mix of capital that would allow it not just to survive but to operate on an ongoing basis. For a banking organization to meet this criterion, its tier 1 ratio had to be projected to exceed 6% and its tier 1 common capital ratio 4% by the end of the stress period under the more adverse scenario.

SCAP determined that 10 of the 19 bank holding companies needed to raise a combined total of $185 billion in additional common equity. Shortly after the announcement of the stress test results, the 10 banking organizations submitted capital-raising plans. In addition, several of these organizations and other SCAP bank holding companies submitted plans to increase common equity to repay the Treasury Department’s TARP investments.

Implementation of these plans, which included restrictions on dividends, has led to a dramatic increase in tier 1 capital and substantive improvement in the quality of capital at the SCAP banks. At the end of 2010, the weighted average tier 1 ratio for Group 1 was 12.2%. The rise in tier 1 ratios is especially notable because, by the end of 2010, most of the Group 1 banks had paid back the Treasury Department for equity injected through TARP. Figure 1 shows that the rebuilding of bank capital has not been limited to the SCAP banking organizations. Among the other two groups of large banking organizations, increases in the weighted average tier 1 capital ratios have been in line with that for Group 1. This suggests a general shift has taken place in the views of bank managers and directors about required levels of capitalization.

Improvement in the quality of bank capital has been just as important as the increase in the level of capitalization. Strategies for adjusting the capitalization mix have differed among the three groups. Each group reduced risk-weighted assets to some extent. However, Groups 1 and 2 have relied heavily on raising common equity and their quality of tier 1 capital has rebounded sharply. Figure 2 shows that Group 2’s quality of capital is on a par with pre-crisis levels. Group 1’s capital quality has improved markedly but has not fully recovered. The capital quality of Group 3 has not recovered as much because these banking organizations have relied more on preferred equity to boost tier 1 capital.

Looking forward, bank stress testing is not likely to lead to the kinds of dramatic increases in capitalization seen in recent years. Nor will stress testing diminish the role of other capital regulatory practices. With the recent improvements in the level and quality of bank capital, and further increases in bank capitalization expected as changes in the calibration of capital requirements are implemented, the capital positions of large banking organizations should be strong enough to allow most of them to pass stress tests more routinely. Nonetheless, stress testing will still be needed to ensure supervisory flexibility and monitor the adequacy of capitalization in the banking system.

Board of Governors of the Federal Reserve System. 2009. “The Supervisory Capital Assessment Program: Overview of Results.” May 7.