Although the U.S. economy is recovering from the 2007–09 recession, the labor market remains weak. The unemployment rate was 8.9% in February 2011, down more than a percentage point from its peak in 2009, but about four percentage points higher than before the recession. Some economists have concluded that this persistently high unemployment rate is due largely to structural frictions in the U.S. labor market rather than to weak demand for workers associated with the severe recession (Kocherlakota 2010). Generally, such structural frictions arise from mismatches between workers and employers. A common example of a mismatch occurs when employers are looking for skills that are different from those that available workers offer. Another type of mismatch occurs when jobs are available in geographic regions with few qualified job seekers (see Daly, Hobijn, and Valletta 2011 and Weidner and Williams 2011).

We use person-level micro data from the Current Population Survey (CPS), which is the source of the unemployment rate published by the Bureau of Labor Statistics and other aggregate labor market statistics. Unfortunately, the CPS does not provide precise information on when an individual graduates from college. As an alternative, we consider two proxy samples of recent college graduates. The first, which we call the “cohort sample,” consists of all 21–23 year olds with a bachelor’s degree. Though we don’t know their graduation dates, we assume they recently obtained their degrees. The second, called the “matched graduates” sample, consists of 21–25 year olds who have a bachelor’s degree but did not have one 12 months before. Because of the way the CPS is constructed, we can only analyze individuals over time if they have continued to live in the same residence. Thus, the matched graduates sample includes only former students who graduated during the past 12 months and who stayed in the same residence, such as commuter students or those who found employment locally. We include 24 and 25 year olds to increase the sample size.

Of our two proxy samples, the cohort group is broader because it includes recent graduates who moved after they got their degree or who graduated more than a year ago. Among cohort group members who were in the CPS a year earlier, 70% had a bachelor’s degree and 30% did not have such a degree a year before. Thus, the cohort group includes individuals who have been at their jobs longer or been able to search longer. Because of the smaller size of the matched graduates sample, the results for the group tend to be more volatile than for the cohort sample. Both of these samples have advantages and limitations. However, both samples point to the same conclusion: the labor market opportunities of recent college graduates deteriorated to a similar extent in both the current downturn and the 2001 recession and recovery.

Economists have cited several structural factors that might be pushing the unemployment rate higher than would normally be expected at this stage of the business cycle. In addition to the previously noted mismatches, the temporary extensions of unemployment insurance (UI) benefits up to 99 weeks could be increasing the unemployment rate. However, the UI extensions barely affect recent college graduates because, as new entrants to the labor force, they generally are not eligible for benefits. Even if a graduate worked during college, the individual would be ineligible for UI benefits in most states if he or she worked part time or through work-study. 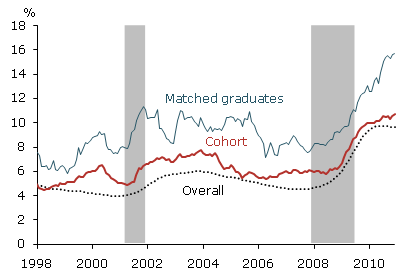 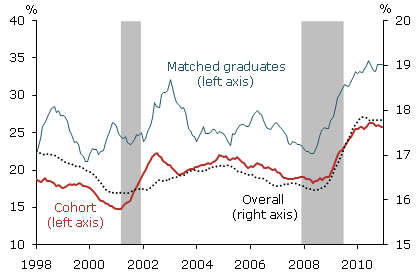 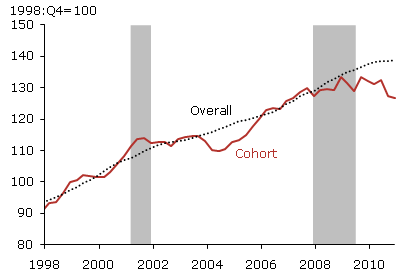 So far, we have looked at recent college graduates who are unemployed or unable to find full-time employment. Figure 3 shows that the weak labor market has also limited the wage growth of those who are employed full time. The figure displays only data for the cohort group. Earnings data are available only for a subset of the already-small matched graduates sample, so it would be difficult to draw statistically meaningful conclusions.

The effect of the very weak labor market for recent college graduates is likely to go beyond their current employment and earnings prospects. Graduating from college during a recession has significant and persistent negative effects on future earnings (Kahn 2010 and Oreopoulos, von Wachter, and Heisz 2010). Given the current weak labor market, we expect the labor market outcomes of the recent college graduate cohort to remain depressed well into the future.

Colin Gardiner and Theodore Wiles are research associates in the Economic Research Department of the Federal Reserve Bank of San Francisco.

Oreopoulos, Philip, Till von Wachter, and Andrew Heisz. 2006. “The Short- and Long-Term Career Effects of Graduating in a Recession: Hysteresis and Heterogeneity in the Market for College Graduates.” NBER Working Paper 12159.