Long-Run Impact of the Crisis in Europe: Reforms and Austerity Measures

The euro area faces its first sovereign debt crisis, highlighting the fiscal imbalances of member countries. Troubled countries are implementing austerity measures, with adjustments focusing on the short and medium run. However, a long-run solution to Europe’s problems requires economic reforms that increase competitiveness and reduce labor costs in the peripheral countries. Such reforms would promote convergence of the euro-area economies and enhance the long-run sustainability of monetary union.

Global markets have been shaken by the euro area’s first sovereign debt crisis. The International Monetary Fund’s programs of fiscal reform and financial assistance for Greece and Ireland mark its first such interventions in the euro area. Yields on sovereign bonds have increased sharply for Greece, Ireland, and some other countries. Divergences in those yields highlight the economic differences among euro-area countries and suggest that markets are questioning whether their governments will repay their borrowing in full. More fundamentally, questions have been raised about the sustainability of the 17-nation euro area as a monetary union.

This Economic Letter discusses the imbalances in the euro area and the policies designed to address the region’s economic and fiscal problems. These policies include austerity measures. But, more importantly, they need to encompass economic reforms that strengthen monetary union rules and safeguard the region from future crises.

The effort to build an economic cooperation area among European countries dates from the end of World War II. In the 1970s, a movement toward a single currency began when some European countries agreed to keep fluctuations of their currencies within narrow bands. In 1993, the Maastricht Treaty established the European Union (EU), creating a single market with common laws and free movement of goods, services, labor, and capital. In 1999, 11 countries—Austria, Belgium, Finland, France, Germany, Ireland, Italy, Luxembourg, Portugal, Spain, and the Netherlands—formed the European Monetary Union (EMU), establishing a single currency and a common monetary policy. The founding members were later joined by Cyprus, Greece, Malta, Slovakia, Slovenia, and Estonia.

Before joining the euro area, countries had to fulfill specific requirements: 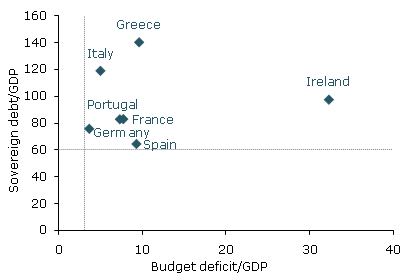 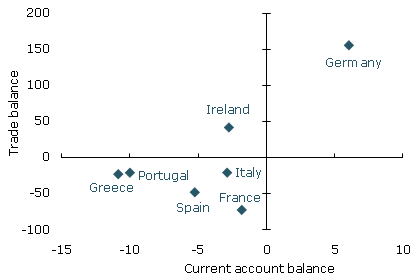 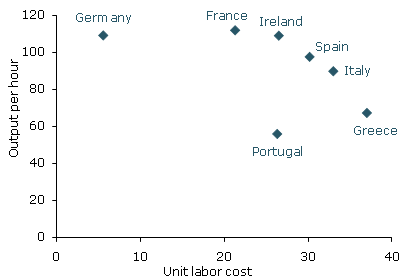 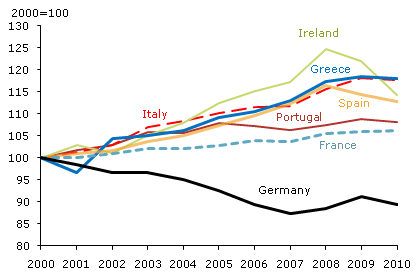 Despite these requirements, divergences from fiscal targets and other imbalances have arisen in the past few years. Figure 1 shows the most striking departures from EMU debt limits and fiscal requirements among member countries. While the increases in public debt and deficits can be partially explained by the severe financial crisis of 2007–08 and the recession that followed, Greece and some other EMU member countries missed those targets before the downturn.

Discrepancies in balance-of-payments accounts, such as current account and trade balances, are also large. Figure 2 shows that countries on the periphery of the euro area have large current account deficits, making them dependent on external investment capital. Trade balances follow a similar pattern, with large differences in the share of exports to GDP for some countries.

Labor markets are also an important source of disparity across the region. In theory, free movement of labor should foster convergence in labor costs and productivity across member countries. However, in practice, differences remain quite substantial. Figure 3 shows the variation in labor costs and productivity across countries. These divergences reflect differences in legislation, wage-setting mechanisms, and severance costs among member countries. Figure 4 shows real exchange rates based on labor costs, highlighting the gap in trade competitiveness between Germany and its euro-area partners.

The economic theory of optimal currency area highlights the preconditions for making a monetary union sustainable (Mundell 1961). An optimal currency area should feature free mobility of goods, services, capital and labor, which are crucial for mitigating country-specific shocks and promoting convergence of macroeconomic variables. In addition, since countries forgo monetary policy autonomy when adopting a common currency, an optimal area should be composed of countries with similar fiscal policies and overlapping business cycles. In that way, monetary policy can react to shocks without jeopardizing one country’s economy while benefiting others.

Euro-area countries, especially those on the periphery, have slashed budgets to reduce their fiscal deficits to the EMU’s 3% maximum within the next few years. In some cases, such as Greece and Ireland, the adjustments are substantial.

The IMF austerity and economic reform program in Greece merits special attention. Greece is projected to reduce its fiscal deficit from its current 13.6% to 2.6% by 2014. To accomplish this, the government is required to cut public sector wages, freeze state-funded pensions, and strengthen tax collection. In addition, reform of regional and municipal government administration will reduce the number of local government units, permitting better coordination of spending and borrowing at the subnational level.  The quality of economic data is to be upgraded to provide better information about the country’s fiscal situation. The government is also privatizing public enterprises and trying to make public-sector wages more transparent. Labor reforms include wage and benefit cuts to reduce costs and improve price competitiveness. Finally, pensions are being reformed to enhance the long-run sustainability of the pension system.

In Ireland, a sharp recession followed the bursting of its housing bubble. The downturn resulted in a dramatic deterioration of the national budget and the Irish banking system. The government backed the financial system by guaranteeing bank liabilities and nationalizing troubled banks. However, when the European debt crisis erupted, the value of debt guaranteed by the Irish government plunged, one of the major factors that caused the budget deficit to rise to 37% of gross domestic product. The combined IMF–EU package for Ireland includes fiscal adjustments and target dates for the Irish government to sell off its stakes in Irish banks. To regain credibility and fiscal control, the country is readjusting its fiscal accounts, reducing the minimum wage for public-sector workers, cutting the social welfare budget, and eliminating public jobs.

Spain, the fourth largest economy in the euro zone, is carrying out structural reforms of its banking system and labor market. The bursting of the Spanish housing bubble exposed the fragility of the country’s banking system, especially its saving banks, known as cajas. Spanish authorities established a bank restructuring fund that concentrates mainly on the cajas. The Spanish parliament is considering more comprehensive banking system reforms, which would limit local government influence on the cajas and allow them to raise private capital. Labor reform is also before parliament. High severance costs in Spain have created a dual labor market. Around 35% of employees work under temporary contracts, with the remainder under permanent contracts that are extremely costly to break. In addition, wage negotiations in Spain are highly centralized, limiting flexibility. The housing market boom of the early 2000s increased the number of temporary contracts in the construction sector and spurred wage increases for permanent employees above productivity gains.

Other euro-area countries are also implementing austerity measures and reforms. Portugal is planning to reduce its budget deficit to 2.8% of GDP by 2013. The government also plans to carry out structural reforms to enhance export competitiveness, invest in human and physical capital, and improve the educational system and infrastructure. Italy’s fiscal deficit is not as large as some other euro-area countries, but it has one of zone’s highest debt-to-GDP ratios. Labor market rigidities and an outsized public sector jeopardize Italy’s productivity growth and competitiveness. The government expects to reduce its fiscal deficit to 2.7% of GDP by 2014. Italy is also reforming its social security system and labor markets. France and Germany, the euro area’s core members, have not been exempt from austerity. Germany is tightening its belt to stay within euro-area debt limits. France plans to reform its social security system by raising the retirement age from 60 to 62.

Despite the widespread austerity and reform measures, markets question whether the euro zone will break up. The EMU’s governing treaties are silent on the question of break-up. The EU’s 2007 Lisbon Treaty, which amends earlier EU treaties, explicitly provides a mechanism for voluntary secession. The exit clause requires a member country wishing to withdraw to inform the European Council of its intention, after which the council negotiates terms of withdrawal. Depending on the terms, the withdrawing country could leave any time within a two-year period. The treaty doesn’t address the possibility of a country leaving the monetary union. However, practically speaking, the European treaties provide no sanctions that could be applied to a country that unilaterally withdraws from the EMU. As a result, there are no explicit juridical, administrative, or diplomatic consequences of withdrawal. In principle, a country could withdraw from the EMU and peg its currency to the euro at a rate it chooses.

The euro area’s first sovereign debt crisis has exposed the fiscal imbalances of its member countries. The crisis has highlighted disparities in macroeconomic fundamentals across the area, raising questions about the sustainability of monetary union. The benefits of a common currency come with the cost of adjusting fiscal policy to monetary union standards and setting macroeconomic goals that converge with those of other member countries. In response to the debt crisis, the area’s most troubled countries have adopted wide-ranging austerity measures focusing on short- and medium-term adjustment. Efforts are also under way at the EU level to promote fiscal stability. To achieve stability, the EU must address the striking disparities in the fiscal positions of its members, although disagreements about how to set fiscal standards are likely. Long-run solutions to Europe’s problems also require economic reforms that increase competitiveness and reduce labor costs in the peripheral countries. Some of those countries have put in place fundamental banking and labor reforms to achieve these goals. If they are implemented, they are likely to promote the convergence of euro-area economies and help sustain the euro area in the long run.

Fernanda Nechio is an economist at the Federal Reserve Bank of San Francisco.