Unexpected events such as job displacement, disability, and divorce can have negative effects on individual and family income. For many families, social insurance provided by the government plays an important role in buffering the impact of these shocks. However, on average, Americans depend more on private resources rather than the public sector to insure against these losses.

Life-cycle shocks such as job loss, disability, and divorce can have large effects on individual and household economic well-being. Understanding these impacts is important for designing and maintaining an adequate social safety net. In this Economic Letter, we examine how these shocks affect family income. We trace the path of total family income before and after job displacement, the onset of a disability, or divorce. We then examine the components of total family income, including labor earnings, transfer payments, and other income, and look at how each responds to these shocks. We find several important patterns. The U.S. social safety net helps mitigate the impact of these shocks, but on average offsets only a portion of the losses. Private actions, including drawing on savings or increased employment of other family members, also play an important role in offsetting income losses following shocks. The combination of public and private measures significantly offsets losses in total family income, even when an individual’s earnings fall severely as a result of a shock.

To examine the income of individuals and families following a shock, we use biennial data from 1989 to 2007 from the Panel Study of Income Dynamics, a nationally representative survey. The Panel Study follows individuals over the course of their lives, allowing researchers to track changes in income associated with life-cycle shocks. We study individuals classified either as head of family or spouse who experience job loss, disability, or divorce, tracking their individual and family income for up to six years before and after the onset of a shock.

To ensure that we capture the effects of the three relevant life-cycle shocks rather than changes in income associated with education or retirement, we consider individuals from ages 25 to 61 who are neither full-time students nor retired. From this sample, we identify individuals who have experienced one of three shocks:

Table 1 shows the path of average income from six years before to six years after job displacement, disability, or divorce. The table breaks out both an individual’s own earnings from labor and total family earnings for those in our sample who experience one of the three life-cycle shocks. Six years before a shock, there is little difference in own earnings or total family income of individuals who lose a job or get a divorce. With disability though, both own labor earnings and total family income are lower six years before the shock. This is consistent with previous research showing that work-limiting disabilities are associated with lower socioeconomic status (Burkhauser and Daly 1994, 1998).

To better understand the dynamics of income after a life-cycle shock, we look at changes from survey to survey, or every two years. We also dig deeper into the components of total family income and track changes in government transfer payments and labor earnings of other family members. 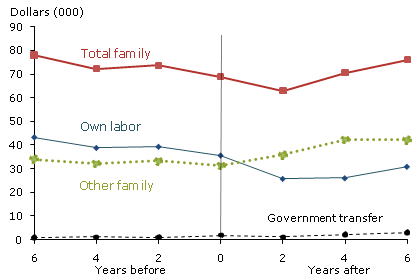 Figure 1 plots how job displacement affects an individual’s own labor earnings, other sources of income, and total family income in the years leading up to and following a shock. Both own earnings and total family income trend down in the years leading up to job loss. This could be because the employment situation is growing tenuous for these individuals prior to actual displacement. Following the job loss, the decline becomes far more pronounced.

The change in mean labor income for a job loser in the two years after displacement is approximately $9,800. However, the drop in labor income is offset both in the near and long term. In the near term, government transfer income, largely unemployment insurance, increases on average about $840 from the prior period, partially offsetting the earned income losses. More importantly, increased earnings of other family members, known as the added worker effect, greatly cushion the near-term fall in family income and contribute to its growth two to six years following displacement. Other family income grows by about $11,000 from the year of displacement to four years after. While total family income has almost fully recovered six years after the shock, the displaced worker’s own labor income is at a permanently lower level. Furthermore, the response of other family members to job loss is the greatest buffer for family income. More detailed research on prime-aged and older workers confirms the pattern shown here, but also shows the drop in own earnings becomes much larger with age (Couch and Placzek 2010 and Couch et al. 2009). 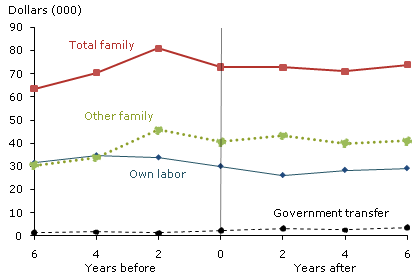 As Figure 2 shows, the pattern of income changes associated with disability is different from the pattern for job displacement. By the time an individual reports being disabled, most income adjustments have already occurred. For example, four years before the onset of disability, earnings of other family members increase and total family income rises. Two years before disability, own labor earnings begin to fall and government transfer income begins to rise. By the time the shock occurs, these adjustments are complete. Total family income and its components remain relatively stable over the remainder of the sample period. 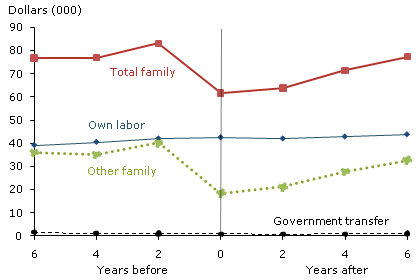 As Figure 3 shows, divorce has the most distinct family income path of the three life-cycle events. Unlike job loss and disability, by definition divorce results in a splitting of family income. The drop in family income is large, but it is should be viewed as a mechanical result of the economic separation of the two parties. For that reason, we see the same pattern in other family income. The upward trajectory of total family income experiences a sharp one-time downward shift in the year of divorce, falling by an average of $21,397. It then resumes its growth.

Family income never returns to the pre-divorce level, but it does recover a majority of the lost ground. The growth of total family income after divorce is due in part to a steady increase in own labor income, even during the divorce. The dissolution of a marriage doesn’t generally impair an individual’s ability to work. After divorce, recovery of income from other family members ultimately restores most of the lost total family income. This is largely due to remarriage and reestablishment of a two-income family. Government transfer income is relatively unaffected by divorce.

Over a life cycle, unexpected events frequently occur. Work-limiting disabilities, job losses, and divorces generally have damaging economic effects. For the most part, individuals and families respond to these shocks privately. In the case of families whose principal income earner becomes disabled, other family members increase their income from labor to offset lost earnings. On average, job displacement permanently reduces an individual’s earnings. However, other family members respond by increasing their work activity. Similarly, prime-aged workers on average make up for the large earnings loss that typically follows divorce by adding income from new family partners. Social safety net insurance is important in mitigating the circumstances of those who experience the most severe unexpected life-cycle shocks, such as an incapacitating disability. However, on average, most post-shock family income comes from the earnings of family members. If a life-cycle shock causes the principal earner to lose income, other family members take up all or most of the slack by increasing their own earnings. The data suggest that Americans depend mostly on their own families for the resources necessary to weather unexpected economic events.

Kenneth A. Couch is an associate professor of economics at the University of Connecticut.

Mary C. Daly is a vice president in the Economic Research Department of the Federal Reserve Bank of San Francisco.

Colin Gardiner is a research associate in the Economic Research Department of the Federal Reserve Bank of San Francisco.