To understand the effects of news on bond markets, it is instructive to look beyond individual maturities and consider the entire term structure of interest rates. For example, unexpected changes in monthly nonfarm payroll employment numbers cause large movements at short and medium maturities, but do not affect long-term interest rates. Inflation news affects the long end of the term structure. Monetary policy actions vary in their effects on interest rates, but cause volatility at all maturities, including distant forward rates.

Daily changes in various interest rates are a staple of the financial news. But what causes these constant up-and-down movements? The underlying determinants are factors such as prospects for economic growth, expectations regarding inflation and monetary policy, and compensation for risk. Interest rates change as market participants receive new information about these factors. Often, various interest rates move together in the same direction.

However, there is more to interest rate changes than direction and magnitude. Bonds that mature at different time horizons do not move in lockstep. Much can be learned by looking at changes in the term structure of interest rates, that is, the entire range of rates from short maturities to long. Sometimes short-term interest rates move strongly and the long end of the term structure barely shifts. At other times, the short end remains anchored and the action is only in medium- and long-term rates. Identifying changes in interest rates across the maturity spectrum can be useful when assessing the impact of news on market expectations about the macroeconomy and future monetary policy. This Economic Letter looks at how different types of news affect interest rates across maturities.

Shifts in the term structure of interest rates

Yields on U.S. Treasury securities typically receive the most attention in reporting on the fixed income markets. Treasury security maturities range from less than a month to about 30 years. Gürkaynak, Sack, and Wright (2007) have constructed a useful data set of Treasury security yields and forward rates based on the prices of these securities. The data set is updated every day and publicly available at http://www.federalreserve.gov/econresdata/researchdata.htm. 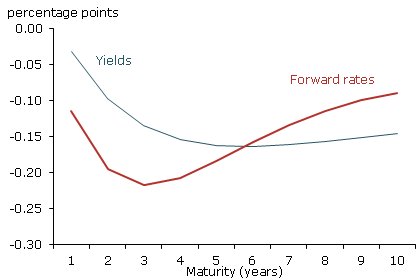 For example, consider the employment report released on July 8, 2011, in which the U.S. Bureau of Labor Statistics (BLS) reported that total nonfarm payroll employment increased by 18,000 in June. This fell well short of the consensus forecast for a 105,000 increase in payroll positions and was interpreted as bad news regarding the pace of economic recovery. Figure 1 shows the daily changes between July 7 and July 8, 2011, in hundredths of a percentage point for one- to ten-year Treasury yields and forward rates one to ten years ahead. All yields decreased, but by different magnitudes.

To get a better idea of the interest rate movements across horizons, I consider forward rates instead of yields. A forward rate is about one specific future point in time whereas yields are averages of forward rates. Thus forward rates offer clearer information about different horizons. On July 8, following the BLS employment report, the largest movements occurred in forward rates two to four years ahead. Changes at the longer end of the term structure eight to ten years out were much smaller. To the extent that these yield changes reflect shifting expectations for future short-term interest rates, the June employment report caused market participants to lower their anticipated path for the Federal Reserve’s policy rate, the federal funds rate, most dramatically at the two- to four-year horizon.

Macro surprises and the response of the term structure

The employment report example demonstrates a typical pattern. Interest rates respond to macroeconomic surprises in a pro-cyclical fashion. That is, yields fall in response to weaker-than-expected data and rise in response to stronger-than-expected data. Several empirical studies have documented this pattern. Balduzzi, Elton, and Green (2001) studied the response of some specific Treasury yields to macroeconomic announcements using a now standard event study methodology. The authors constructed a measure of surprise based on the difference between actual data and the median forecast in surveys prior to the data release, standardized to be comparable across different releases. They then performed a statistical exercise to measure the responses of Treasury yields to the macroeconomic surprises. Studies of this sort typically find that short-term yields respond little, but long-term yields react strongly to macroeconomic data surprises.

To go beyond individual yields, I estimate the responses across the entire term structure, and capture changes in all interest rates. Most of the variation in interest rates is captured by just a few underlying statistical factors. Based on this idea, it is possible to build a model that calculates the responses to economic data releases of Treasury security yields and forward rates across the entire term structure (see Bauer 2011).

Figure 2 shows the response of the forward rate curve to surprises in payroll employment and to the core consumer price index (CPI), which excludes food and energy. The dashed lines indicate the model’s predictions with 95% confidence. Forward rates at short and medium horizons show large and significant responses to surprises in nonfarm payrolls. The strongest response, around 0.07 percentage point, occurs at a maturity of about two years. Notably, far-ahead forward rates at horizons longer than six years do not significantly respond to the employment news. On the other hand, responses to core CPI inflation surprises are smaller in magnitude, but extend to the long end of the maturity spectrum. Distant forward rates show a small but statistically significant increase of about 0.015 percentage point to a higher-than-expected core CPI.

Thus, this model suggests an important difference between the effects of employment news and inflation news on interest rates. While employment news causes large responses, only inflation news affects the long end of the term structure (see Bauer 2011). This result contrasts with the findings of other studies regarding the long forward rate response to economic news (see Gürkaynak, Sack, and Swanson 2005).

Monetary policy actions, such as changes in the federal funds target, releases of Federal Open Market Committee (FOMC) statements, or speeches by committee participants, often contain new information relevant to financial markets. Importantly, while the Fed has direct control only over the federal funds rate, it can also affect interest rates at other maturities by changing expectations of future monetary policy. How does monetary policy affect the term structure? In what way does it affect longer-term interest rates, which are crucial in determining lending costs and mortgage rates, and strongly influence economic behavior? Looking at the entire term structure of forward rates reveals how much news about monetary policy changes perceptions of economic fundamentals and affects rates at different horizons. Specifically, changes in the term structure show whether policy actions directly affect distant forward rates or whether the effects die after medium horizons.

An important difference exists between macroeconomic news and monetary policy news. We can quantify economic surprises, but we do not have a measure that satisfactorily captures all aspects of policy surprises. The language of FOMC statements and speeches cannot easily be quantified. To capture the surprise component, researchers have focused on how policy actions affect financial markets (see Kuttner 2001). Thus, to assess the effects of policy actions, I employ the same model-based methodology I used with employment and inflation news, examining changes across the entire term structure of interest rates as policy surprises were made public. 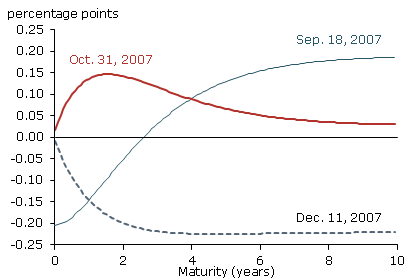 Figure 3 shows the effects on forward rates of three Fed moves in 2007 to lower the federal funds target: a half percentage point cut on September 18, a quarter percentage point cut on October 31, and another quarter percentage point cut on December 11. These three easing actions had very different effects on the term structure. In September, the size of the cut surprised market participants. Short-term rates fell, but longer forward rates actually increased, which may have reflected an upward revision in expectations about economic growth. In October, forward rates at short and medium horizons increased on the day of the meeting, probably because markets had expected a larger federal funds rate move or a change in the language of the Fed’s policy statement. Thus, monetary policy was viewed as tighter than previously anticipated. Markets had anticipated the Fed’s December cut, so the short end of the term structure did not move much. But medium and longer-term forward rates fell significantly. Changing statement language apparently led market participants to expect much easier monetary policy over the medium and long horizons. 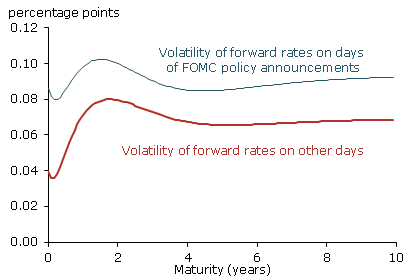 Are there systematic effects of monetary policy on the term structure? Considering policy-driven interest volatility is helpful in answering this question. Figure 4 compares the forward rate volatilities on days of FOMC statements with the volatilities on days without such statements. Days on which the Fed released statements about monetary policy show higher volatilities than other days. Evidently, monetary policy is a key driver of interest rate movements. While most action is in rates at medium maturities of two to three years, policy actions also cause significant volatility in distant forward rates. Of course, this does not tell us whether long rates move in the same direction as shorter-term rates. It does however show that the effects of monetary policy on expectations extend to long horizons and do not die after horizons of a few years.

To understand the effects of macroeconomic data surprises and monetary policy actions on financial markets, it is important to consider how these affect the entire cross section of interest rates. Such an analysis shows where on the time horizon market expectations of economic fundamentals have changed. Similar analysis of the term structures of real interest rates, inflation expectations, and risk premiums has the potential to reveal even more about how changes in economic fundamentals drive the term structure of interest rates.