Federal Reserve announcements of future purchases of longer-term bonds may affect asset prices by changing market expectations of the future supply of targeted securities. Such announcements may also affect asset prices by signaling that the stance of conventional monetary policy is likely to remain loose for longer than previously anticipated. Research suggests that these signaling effects were a major contributor to the cumulative declines in Treasury security yields following the eight Fed announcements in 2008 and 2009 about its first round of large-scale asset purchases.

After lowering short-term interest rates essentially to the zero lower bound, central banks in several countries have turned to unconventional measures to provide further monetary policy stimulus (Rudebusch 2009). In particular, the Federal Reserve has carried out large-scale asset purchases (LSAPs) of Treasury securities and other debt instruments in order to put further downward pressure on long-term interest rates, thereby stimulating consumer and business spending. Two rounds of LSAPs, dubbed QE1 and QE2 for quantitative easing, took place in 2009 and 2010, with purchases totaling $1.75 trillion and $600 billion, respectively. On September 21, 2011, the Federal Open Market Committee announced a third round of LSAPs, which include purchases of an additional $400 billion in long-term Treasury securities financed by the sale of short-term debt.

Recent research has analyzed the effects of the Fed’s first two LSAP programs on financial markets. Studies using a variety of methodologies generally agree that the Fed was successful in lowering long-term interest rates (see surveys in Williams 2011 and Kozicki et al. 2011). For example, one influential study (Gagnon et al. 2011) estimated that QE1 announcements lowered the yield on the ten-year Treasury note about 0.50 to 1.0 percentage point.

However, the exact mechanism by which LSAP announcements lowered long-term interest rates remains unclear. One possibility is that such announcements indicate greater Fed demand for specific securities, thereby driving up the prices of those securities. Another possibility is that LSAP announcements signal that the Fed will maintain an easier stance of conventional monetary policy in the future. In other words, the path of the Fed’s policy rate, the federal funds rate, will be lower than previously expected. This Economic Letter describes evidence on the relative importance of these two channels (for a more detailed explanation of this research, see Bauer and Rudebusch 2011). We find that the effectiveness of the Fed’s LSAPs reflected to a considerable extent signals about the likely future path of the short-term interest rate.

Long-term interest rates can be separated into two components: expectations of average future short-term interest rates; and a premium that investors require for bearing the risk of a long-term bond investment, known as a term premium. In conventional finance models, neither of these components is affected by changes in the supply of bonds. In such models, changes in supply don’t affect expectations of future monetary policy or the premium for interest rate risk.

Researchers have departed from conventional asset price models in two ways to explain the effects of LSAPs. First, they have considered what would happen if markets for different fixed income securities were largely segmented and different bonds were not perfect substitutes for each other. In such a case, shifts in demand or supply for a specific security could directly affect the price of that security. This portfolio balance channel assumes that investors are heterogeneous, that is, that different investors prefer different kinds of assets. In other words, they have what has been called preferred habitats. As a result, the markets for these different kinds of assets are at least partly separated. Consequently, a decrease in the supply of long-term bonds available to private investors leads to a lower interest rate because of a decrease in the term premium, which in addition to compensation for risk also captures imbalances in supply and demand.

To understand the observed effects of LSAPs on financial markets, policymakers and researchers need to evaluate the relative importance of these two channels. Only a few studies have looked at this question. Notably, Gagnon and co-authors (2011) are skeptical about signaling and conclude that the portfolio balance channel probably explains most of the effects.

Here, we consider evidence based on responses in the interest rate futures market and movements in spreads between rates on different securities. We also use asset price models to separate changes in long-term interest rates into expectations and term-premium components. We use an event study methodology that follows Gagnon et al. (2011), in which the effects of a policy action are estimated by the changes in asset prices or interest rates over a tight window of time around its announcement. As long as a policy announcement is unexpected and markets incorporate the new information quickly, this methodology accurately captures the announcement’s effects on financial markets. Most of the information about the QE1 asset purchases came from eight announcements: the initial announcement on November 25, 2008; Chairman Bernanke’s speech on December 1, 2009; and six subsequent FOMC announcements. The total financial market effects of QE1 are estimated by the cumulative daily changes around these eight announcements.

Changes in futures rates and spreads 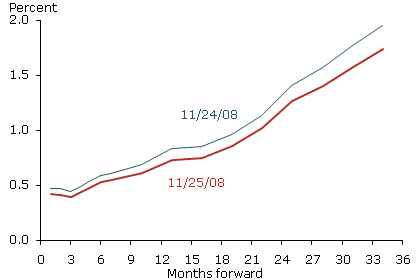 Information from money market futures can be used to estimate financial market expectations regarding monetary policy rates over short and medium horizons. By examining money market futures rates, one can construct a “futures-implied policy path.” Like any interest rate, futures rates contain an expectations component and a term premium component. Because the term premium is probably small for short maturities, changes in near-term futures rates mostly reflect changes in expectations about monetary policy. Figure 1 shows how expectations about the path of policy changed on the day of the first LSAP announcement. The policy path shifted downward significantly at all horizons. Similarly, adding up the total response of futures rates following the eight QE1 announcements, market participants appeared to have significantly lowered their expectations about the future path of the federal funds rate.

It is also useful to compare interest rate movements of the Treasury securities targeted by the LSAPs to movements in rates of other debt securities with the same risk characteristics and maturities, such as overnight interest swap (OIS) rates. Assuming that the portfolio balance channel only affects risk premiums in targeted securities, movements in OIS rates will reflect LSAP signaling effects. By contrast, movements in the spreads between Treasury security yields and OIS rates will reflect portfolio balance effects (Joyce et al. 2011). It turns out that Treasury yields and OIS rates responded very similarly to LSAP announcements, which supports a signaling channel for LSAPs. However, a definitive assessment requires a model that can separate out the responses of the two components of Treasury yields.

Changes in expectations and risk premiums

To separate the expectations and term premium components of yields, researchers typically use what is called a dynamic term structure model. Gagnon et al. (2011) use the output of a model known as Kim-Wright (see http://www.federalreserve.gov/econresdata/researchdata.htm) to estimate the relative importance of the signaling and portfolio balance channels. To ensure that the results from any single model are widely applicable, it is helpful to consider alternative model estimates. In Bauer and Rudebusch (2011), we estimate several different models. Here we present one set of estimates from our preferred model, known as the restricted risk prices model.

Figure 2
Decomposition of cumulative effect of QE1 on yields 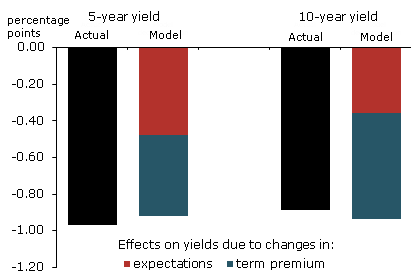 Figure 2 shows the way our preferred model separates out the cumulative decline in five-year and ten-year yields around the eight LSAP announcements, calculated as the sum of the eight daily changes. The total height of a bar corresponds to the cumulative change in yield as estimated by the model. These estimates differ from the actual yield changes because the model does not represent interest rates perfectly. The five-year yield cumulatively fell 0.97 percentage point and the ten-year yield 0.89 percentage point. Estimates from our preferred model imply that changes in expectations contributed significantly to the decreases in yields. Notably, we find the decrease in expectations for the average future federal funds rate accounted for more than 50% of the decrease in the five-year yield. Our estimates imply that changing expectations played a larger part than the Kim-Wright model suggests. 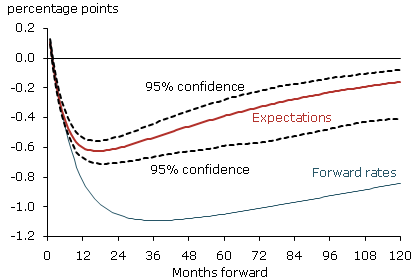 Figure 3 shows how changing expectations about monetary policy affected forward interest rates. Forward rates are the rates that can be contracted today for an overnight loan to be made in the future. They therefore reflect expectations about the future value of the federal funds rate plus a term premium. The blue line shows the cumulative changes in model-generated forward rates following the eight LSAP announcements. The red line shows the cumulative change in the expectations component, that is, the response of the expected future path of monetary policy to the LSAP announcements. The graph shows that changes in expectations explained all of the changes in forward rates at very short horizons and a significant share of changes at longer horizons. Thus, the signaling effects were sizeable, with expectations of future policy rates at horizons of one to two years down by about 0.60 percentage point.

These results include potentially large statistical uncertainty. To account for this uncertainty, we construct a range around our estimates. The dashed lines in Figure 3 represent 95% confidence intervals around the estimated changes in policy expectations, which represent the range that we are 95% confident contains the true changes. According to our model, the data are consistent with the view that changes in medium-term policy expectations account for around 50% of the cumulative yield response following LSAP announcements.

The Federal Reserve’s 2008 and 2009 LSAP announcements had significant and sizeable effects on interest rates, not only by directly changing the supply of Treasury securities, but also in all likelihood by affecting market expectations of future policy rates. In other words, the announcements affected rates through both a portfolio balance channel and a signaling channel. The relative contributions of the two channels appear roughly equal in the United States. Notably this suggests that, even with the federal funds rate at the zero lower bound, forward guidance can be a useful tool in the conduct of monetary policy that can complement other unconventional monetary policy measures.

Glenn Rudebusch is executive vice president and director of research in the Economic Research Department of the Federal Reserve Bank of San Francisco.