Banks have pared their small business loan portfolios by over $47 billion since the pre-recession peak in 2007, with outstanding loans continuing to dwindle. In contrast, indirect evidence suggests that portfolios of loans to larger businesses have started growing again. The trends for small business loans are important because these enterprises play a vital role in the U.S. economy. Nonfarm businesses with fewer than 500 employees account for about half of private-sector output and employ more than half of private-sector workers. Moreover, relatively new businesses, most of which are small, generate a large share of new jobs.

In this Economic Letter, we investigate several small business lending trends, including a continuing shrinkage of bank loans in this category. However, the overall rate of decline may be easing. When we distinguish between large and small banks and between loans backed by commercial real estate and those not backed by commercial property, the signs are clearer of a possible move toward stabilization in small business lending.

About 93% of small businesses used some form of credit in 2003, according to that year’s Survey of Small Business Finances, the most recent survey in this series (Mach and Wolken 2006). Bank loans were not the only source of credit for such businesses. Many small businesses used other sources, such as trade credit, personal credit cards, or home equity loans. Still, about 60% used a bank loan as at least one of their sources.

Small banks may be particularly important for some types of small business credit. If a business has few assets or assets that are difficult to value as collateral, lender underwriting and monitoring must rely heavily on information about the borrower’s creditworthiness and the business’s ongoing prospects. Small businesses often do not have audited financial statements, so lenders frequently must rely on other information. Much of that information is most readily available locally. It might include knowledge about the local economy and community; the borrower’s industry, since some industries are concentrated locally or regionally; the borrower’s particular business; and the character, skills, and other personal attributes of the business owner or owners.

Berger, Klapper, and Udell (2001) argue that small banks have a comparative advantage over large banks in making such “relationship” loans, that is, loans that use this type of “soft” information. Soft information is more qualitative and subjective than “hard” information, such as financial statements, and may be relatively difficult to communicate. Assessments of the character of the business owner, a key element in many small business lending decisions, seems particularly subjective. In theory, both large and small local banks can easily obtain information about the business owner’s character. For example, loan officers may have repeated contacts with the borrower in both business meetings and informal social settings. However, loan officers at small banks may be able to use that information more easily than their counterparts at large banks because fewer layers of management are involved in lending decisions.

What do the data show?

that are not secured by real estate (C&I loans). We examine trends in aggregate business loan volume, that is, C&I plus CRE loans, as well as in those two categories separately. Banks do not report business loans that are collateralized by residential real estate. Such loans are incorporated into the mortgage category. All data are adjusted for mergers and acquisitions. 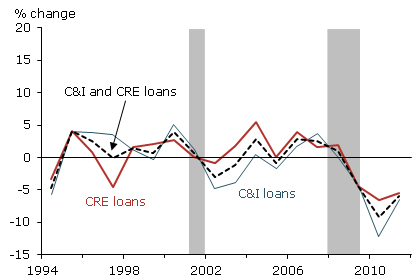 Note: Year-over-year changes for loans originally valued less than $1 million made by institutions with at least $1 billion in assets, adjusted for mergers, including thrift acquisitions. Credit card banks omitted.

The moderation in C&I contraction since mid-2010 is consistent with the results of the Federal Reserve’s quarterly Senior Loan Officer Opinion Survey on Bank Lending Practices, which gathers data from approximately 60 large domestic banks plus some U.S. branches and agencies of foreign banks. The July 2010 survey was the first to show an easing of standards on C&I loans to smaller businesses since late 2006 (Federal Reserve Board 2010).

But, whether positive growth in small C&I loans at large banks will soon occur and be sustained may depend on small business loan demand. The National Federation of Independent Business reports that about 25% of the small businesses it surveys cite poor sales as their main business problem. In contrast, only 3% cite financing as their main business problem, although 8% report that not all of their credit needs are satisfied (Dunkelberg and Wade 2011).

For its part, the continued sharp decrease in small CRE loans at large banks is consistent with the ongoing weakness in commercial real estate. In the office market, vacancy rates remain relatively high and rents are flat. CRE loans and residential mortgages have been the most important nonperforming asset categories at large banks (Greenlee 2010).

What about small banks? 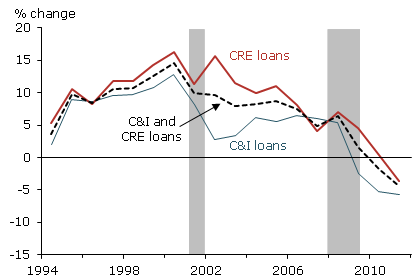 Note: Year-over-year changes for loans originally valued less than $1 millon made by institutions with less than $1 billion in assets, adjusted for mergers, including thrift acquisitions. Credit card banks omitted.

However, the 2007–2009 recession was significantly deeper and longer than the 2001 recession. It’s possible that current economic conditions will restrain recovery in small bank small C&I loans for an extended period. In this regard, loan performance may offer evidence. Banks report on the performance of all their C&I loans and do not separate out small C&I loans. Therefore, we estimate the aggregate small C&I loan nonperforming ratio at small banks by using the overall C&I loan nonperforming ratio at the subset of small banks that have at least 75% of the dollar volume of their C&I portfolio in loans under $1 million. 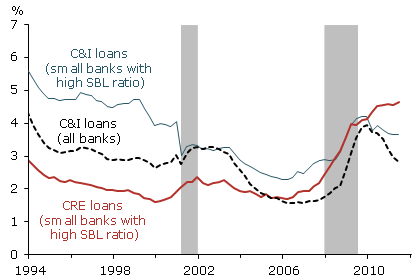 Note: Seasonally adjusted quarterly rates for CRE and C&I loans at small banks (less than $1 billion in assets) with high SBL ratios and for C&I loans at all banks. High ratio banks are determined by ratio of small business lending to total lending in given loan category. Credit card banks omitted.

These loan performance data provide more evidence that small bank small C&I loans may be moving towards growth. Figure 3 shows that, according to our estimate, the small bank small C&I loan nonperforming ratio remains elevated after the run-up during the recession, but appears to have peaked and now be on a downward trend. The downward trend is steeper than immediately after the 2001 recession, as is the case for all C&I loans at all banks. In contrast, small bank small CRE loan portfolios show little sign yet of recovery. Figure 2 shows that the pace of lending contraction has quickened, while our nonperforming loan estimate shows a high and increasing level of delinquencies.

Although bank small business loan portfolios continue to shrink, hints of possible stabilization have recently appeared. For small banks, small business lending that is not backed by commercial real estate looks slightly healthier than small business lending that is secured by commercial property. Small C&I loans at larger banks are showing stronger signs of a turnaround than small C&I loans at smaller banks. But patterns observed during the 2001 recession and loan performance data suggest that smaller banks may not be far behind.

Liz Laderman is an economist in the Economic Research Department of the Federal Bank of San Francisco.