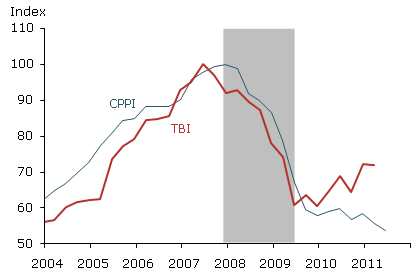 Sources: Moodys/MIT Center for Real Estate. Both indexes are based on “all properties.”

The total value of U.S. private nonresidential structures, including office, industrial, and retail properties, is about $11 trillion, according to the U.S. Commerce Department’s Bureau of Economic Analysis. That compares with an estimated $17 trillion in the total value of residential structures in the United States. Given the size of the market for commercial real estate (CRE), it is important to understand CRE price movements. The Massachusetts Institute of Technology Center for Real Estate publishes two widely used CRE price measures. The Moodys/REAL commercial property price index (CPPI) is based on actual repeat sales of a large sample of CRE properties. The transaction-based index (TBI) also uses sales prices, but employs a different index methodology and a smaller property sample. Figure 1 shows the behavior of the aggregated all-properties CPPI and TBI indexes from 2004 to 2011. From the second quarter of 2007 through the fourth quarter of 2009, both indexes dropped sharply, with the CPPI falling 41% and the TBI 39%.

However, since the beginning of 2010, these indexes have been painting very different pictures. The CPPI indicates that, since the end of 2009, CRE prices have slid 7%. But the TBI indicates that CRE prices have actually risen 19% over that period. This unusual deviation in these two indexes raises the questions of whether CRE prices are currently recovering and how prices are likely to behave going forward. To explore what may happen to these prices, we consider the capitalization rate, or cap rate for short, as an alternative indicator of CRE valuations.

Cap rates as an indicator of future price returns

The cap rate measures the ratio of net operating income to the price of a property. It can be interpreted as the CRE equivalent of the price/earnings ratio in the stock market (see Campbell and Shiller 1988 for the pricing implications of these valuation measures). According to theory, this rent/price ratio is largely a function of interest rates and expected increases in the property’s price. Consider someone who wants to use a real estate property for one year. This person can get the space in two ways. He or she could rent the property for the year, which would cost a year of rent. The rent would appear as part of the property owner’s net operating income. Alternatively, the person who wants to use the property could borrow money, buy it, and hold it for a year. The cost of this ownership option, referred to as the user cost, consists of interest payments on the purchase loan plus the expected change in the property’s price over the holding period. In a well-functioning market with zero transactions costs, the price of these two alternatives should be the same. If they were not—if rents were higher than the user cost, for example—then all market participants would want to buy, bidding up prices until the rental option cost the same.

The important point here is the direct link between the net operating income of the rental option and prices, ownership costs, and expected capital gains of the ownership option. When purchasing CRE, market participants often link cap rates to expected future rental rates and vacancies. Expected increases in rent or lower vacancies tend to lower the cap rate. If rents are expected to increase, then the property has become more valuable and the owner will expect a higher capital gain, which will lead to a lower cap rate. A similar argument can be made for falling vacancies.

Thus, expected price appreciation is ultimately a reflection of the outlook for fundamentals such as rents and vacancies. However, there could also be unidentified nonfundamental reasons for changes in expected price appreciation. For example, investor sentiment may improve and the discount rate applied to cash flows from a property may fall, thereby lowering the cap rate. Indeed, investor sentiment could become so exuberant that a bubble could form, in which expected appreciation soared and the cap rate dropped sharply. 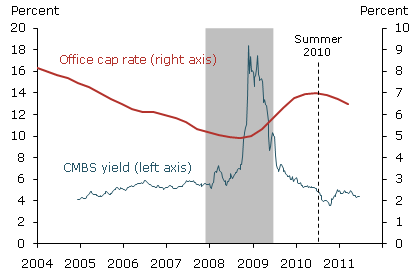 This link between cap rates, interest rates, and expected price appreciation is not merely theoretical. Using a slightly different representation of the cap rate, Ghysels, Plazzi, and Valkanov (2007) show that it predicts CRE returns. In our data we can see these linkages in Figure 2, which compares CRE cap rates with the interest paid on loans to finance CRE transactions. We focus here on the office market, but other CRE asset classes have behaved similarly. Ideally, the interest measure should be the rate on new CRE loans, but those are not readily obtainable. Instead, we use as a proxy for CRE purchase loans the yield on AAA-rated five-year commercial mortgage-backed securities (CMBS), which finance a large share of CRE transactions.

Figure 2 shows that, from 2004 to 2007, office cap rates declined while interest rates were relatively constant. Since the cap rate depends on both interest rates and expected appreciation, the relatively flat interest rates during this period indicate that the decline in the cap rate was due to a steady increase in expected CRE price appreciation. Indeed, the period of falling cap rates in Figure 2 coincides with the run-up of CRE prices shown in Figure 1. During the financial crisis, CRE prices dropped about 40% and the market for financing CRE transactions was severely disrupted, resulting in very high CMBS yields. Both of these factors apparently led to a rise in the cap rate. Following the crisis, CMBS yields for top-rated credits more or less returned to normal. Since the summer of 2010, yields on highly rated CMBS have increased by about 0.30 percentage point. However, cap rates have come down 0.50 percentage point over that same period. This decline in cap rates despite the slight increase in interest rates suggests that investor expectations for CRE price appreciation have strengthened.

Thus, the behavior of cap rates indicates that the market has priced in a slight rebound in CRE prices. This could reflect improved fundamentals, such as expectations that rents will increase, or improved investor sentiment, such as an ebbing of investor risk aversion.

A national or local rebound?

If such a rebound occurs, will it be concentrated in a few cities or will it take place nationwide? To answer this, we analyze to what extent cap rates for different CRE asset classes move together across the United States by examining quarterly data for 35 of the largest metropolitan statistical areas (MSAs) from the fourth quarter of 1990 through the first quarter of 2011. This period includes two CRE boom and bust cycles. We use a statistical method called principal components analysis to find a single component or factor that is common to all cap rates across the different MSAs. By identifying this common component, we can break down each city’s cap rate into a portion that moves with the national CRE cycle and a market-specific component unrelated to the national trend.

As previously noted, cap rates are partly determined by commercial mortgage interest rates. Because commercial mortgage rates are determined in a national rather than a regional market, cap rate movements that reflect interest rate changes are likely to be common across cities. In addition, cap rates also contain an expected appreciation component, part of which is likely to be common across regional markets because some of the forces that drive local economies are national in scope.

The degree to which regional property markets move with the national market is an empirical question. According to our analysis, the national CRE cycle accounts for about two-thirds of the variation in office cap rates across cities over time. For most cities, the national cycle explains around 80% of cap rate movements. However, the nationwide percentage is lower because a few cities have very distinct CRE cycles. For example, Houston CRE prices reflect the energy market, while San Jose and Oakland, California, prices move with the technology cycle. These cities are exceptional. Local factors are less important in most cities, where CRE prices move relatively closely with the national cycle.

The fact that cap rates move closely together in cities across the country is not likely to be due solely to the influence of national interest rate trends. Figures 1 and 2 suggest that a large part of cap rate movements reflects expected price appreciation. This can be seen clearly in the period from 2004 through 2007, when interest rates were roughly steady while cap rates fell significantly. Thus, our results indicate that most of the fluctuations in expected CRE price appreciation in different cities are driven by the national CRE cycle rather than by local factors.

Figure 3 breaks down the cap rates for each of the cities in our sample into national and local factors. The national factor is clearly dominant in all cities. According to our theoretical user cost model and the observation that interest rates are more or less the same in all CRE markets, the local cap rate component in each city appears to reflect expected CRE price appreciation in those local markets. Furthermore, Figure 3 shows that those cities in which the local components are pushing cap rates down the most, Kansas City, Minneapolis, Salt Lake City, and Austin, are cities where CRE price appreciation is expected to be about 2% higher than would be anticipated based solely on national CRE components.

The most widely followed commercial real estate price measures are sending contradictory signals. One shows substantial price increases since the beginning of 2010, while the other indicates a continuing slide. Cap rates represent an alternative measure of CRE valuation, and they are showing a slight rebound in expected CRE price appreciation. Most cap rate movements are national in scope. Hence, market participants apparently expect a widespread rebound across most U.S. metropolitan areas. Of course, prices in some areas are more closely tied to the national CRE cycle than prices in other areas, so some variation in price appreciation is expected among cities.

David Lang is a research analyst in the Economic Research Department of the Federal Reserve Bank of San Francisco.