Mergers tend to improve credit union cost efficiency. When the acquirer is much larger than the target credit union, target members benefit in terms of lower loan rates and higher deposit rates, while acquirer members see little change. When merger partners are more equal in size, these benefits are shared more evenly. Over time, credit union mergers have shifted from, on average, only benefiting targets to also benefiting acquirers to some extent.

The tide of financial sector mergers has ebbed and flowed. Over the past few decades, thousands of banks merged. The common rationale is that larger banks have lower operating costs—that is, they are more efficient. Many studies have analyzed whether bank costs, revenue, stock market valuation, and other measures improve after mergers (e.g., Berger 1998, Kwan and Wilcox 2002). The evidence for improvement is not very compelling.

Credit unions have grown steadily over recent decades. In 1969, when their number peaked at 23,866, credit union assets totaled $16 billion, only 3% of the assets of commercial banks and 1.6% of GDP. Since 1970, there have been nearly 13,000 credit union mergers. As the number of credit unions declined, so did the number of annual mergers. Nonetheless, the annual percentage of credit unions that merged was remarkably steady, ranging from 2.5% to 3.5% in all but three years since 1984. By 2010, the remaining 7,491 credit unions had $927 billion in assets, equal to 7.6% of bank assets and 6.3% of GDP. In this Economic Letter, we examine credit union costs and revenues in the five years following mergers that took place between 1984 and 2009 (see Dopico and Wilcox 2009 and 2010 for more detailed data and analysis).

Credit unions are financial cooperatives with no outstanding stock. Rather, they are “owned” by their members, who are also their borrowers and depositors. This structure presumably leads to different practices and performance goals than those of banks. Credit union “member-owners” may judge effects of mergers on noninterest expenses and on interest income and expenses differently than do bank shareholders. For example, a bank might merge to reduce noninterest expenses and thereby raise net earnings. By contrast, a credit union might use merger-related cost savings to offer its members lower rates of interest on loans and higher rates on deposits.

Targets gain the most

The effects of credit union mergers differ systematically with the relative size of the credit unions involved. We refer to the larger credit union as the “acquirer” and the smaller credit union as the “target.” One issue is how much each institution benefits. In bank mergers, acquirers often pay substantial premiums above the stock prices of their targets, which clearly benefit target stockholders. Acquirer share prices often fall initially, raising the question of whether these mergers benefit acquirer stockholders.

In bank mergers, changes in stock prices may reflect investor judgments about the size or distribution of merger benefits. But credit unions do not issue stock. Therefore, to assess merger effects, we compare pre- and post-merger interest rates on member loans and deposits. At first glance, credit union mergers provide substantial benefits to the members of targets, while barely affecting the members of acquirers. From 1984 to 2009, target members merged into credit unions whose noninterest expenses were 0.79 percentage point lower in the first year after the mergers than at target credit unions. At the same time, interest income to credit unions, which is an expense paid by members, fell 0.51 percentage point. Interest expense, which is income to members, rose 0.08 percentage point. By comparison, acquiring credit unions, on average, saw virtually no change in noninterest expense ratios. With negligible changes in efficiency and expenses, acquirers made negligible changes in loan and deposit rates.

The larger benefits that accrue to target members reflect the small size of targets relative to their acquirers, and the more attractive loan and deposit rates that acquiring credit unions offered. Target assets averaged less than 5% of those of acquirers. Targets also had much higher average noninterest expense and interest income ratios, and lower interest expense ratios. The average difference between targets and acquirers for these performance measures was 0.72, 0.34, and 0.16 percentage point, respectively.

The fact that larger credit unions are more cost efficient and offer better loan and deposit rates is not new. Wilcox (2008) documented that the difference in noninterest expenses between larger and smaller credit unions is large, widespread, and longstanding. This gap has apparently increased steadily in recent decades.

Mergers of equals and of unequals 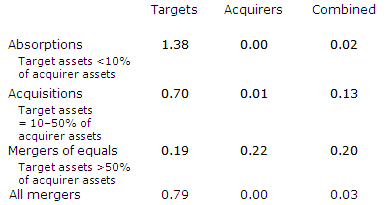 We are also interested in whether mergers improved the cost efficiency and interest rates on loans and deposits at the combined credit unions. Improving aggregate cost efficiency means reducing the total cost of serving the combined credit union membership. In the first year after mergers, aggregate noninterest expenses fell by 0.02 percentage point in absorptions, 0.13 in acquisitions, and 0.20 in mergers of equals. By definition, mergers of equals added relatively more members and assets, which enabled those credit unions to reap relatively more efficiency gains.

If the benefits of mergers of equals are large, why are they relatively rare? There are several explanations. Some credit union absorptions probably reflect benevolence. Larger, more cost-efficient credit unions may participate in absorptions to improve loan and deposit rates and services for members of smaller credit unions, despite minimal or nonexistent benefits to their own members. Historically, credit unions had an ethos of cooperation, fostered by restrictions that effectively precluded competition for members. In addition, regulators sometimes encouraged better-performing and underperforming credit unions to merge. Further, mergers of equals may be more difficult to execute. The absence of stock probably complicates agreements between equals by making it difficult to determine the relative influence of the merger partners when combining management, computer systems, and branches, and making decisions about reducing costs and laying off employees (Filson et al. 2008).

Each member-owner in a credit union has one vote in matters of governance, regardless of his or her loan and deposit balances. Credit union member-owners may impose less business discipline than stockholders of commercial banks. Poor performance and lower stock prices sometimes prompt replacement of bank management and directors. But, in credit unions, poor performance rarely spurs greater voter participation or rival slates in board elections. Indeed, in contrast with commercial banks, which sometimes tout merger-related cost cutting, merging credit unions often emphasize that they want to avoid firing employees, even when it would reduce costs.

The potentially weaker pressures to cut costs at merged credit unions raises a question: In the years after mergers, did lower noninterest expenses persist, or did they evaporate? To assess longer-run effects, we calculated changes in noninterest expense ratios across our three merger categories for each of the five years following mergers.

Although credit union mergers of equals delivered sizable first-year cost reductions, on average the savings dissipated completely after five years. In contrast, acquisitions sustained far more, if not all, of their noninterest expense reductions: Their average reductions were 0.13 percentage points in the first year and 0.07 percentage points in the fifth year. The greater persistence of savings in these transactions may be because decisions about combining management, operations, and strategies were simpler.

The merger-induced consolidation of the credit union industry has raised the average, inflation-adjusted size of credit unions more than thirtyfold since 1969. In addition, technological advances and easier regulation have allowed credit unions to offer more services. Today, credit union product lines go well beyond checking accounts, credit cards, and auto loans. Many now offer retirement and health savings accounts, and the services of insurance and brokerage affiliates. As a result of this expansion, credit unions are increasingly managed by professionals instead of volunteers.

We also examined variations in merger effects over time by looking at three periods: 1984–1989, the 1990s, and the 2000s. Throughout these periods, mergers affected targets more than acquirers. In the past, cost reductions particularly benefited targets. More recently, though, benefits appear to have been more evenly shared. For example, the noninterest expense ratios of acquiring credit unions fell modestly following recent mergers, instead of rising modestly as they did in the past. Targets still benefited considerably, but not as much as they did in the past. Mergers in the 1980s reduced first-year expenses for members of target credit unions by more than 1.11 percentage points. By contrast, target costs fell by 0.71 percentage point after mergers in the 2000s.

Luis G. Dopico is an economist with Macrometrix, a financial and economic consulting firm.