Rising layoff rates during the spring of 2011 highlight renewed labor market weakness. Although job cuts among state and local governments have accelerated over the past few years, most of the recent increase occurred among private-sector employers. Following modest improvement in early summer, subsequent labor market performance has been uneven, indicating that labor market conditions remain fragile.

The broad measures of economic activity identifying business cycles indicate that the recent recession ended in June 2009. But labor market conditions remained quite weak well into 2010. In late 2010 and early 2011, declines in the overall unemployment rate and in broader measures of labor underutilization suggested that the U.S. labor market was strengthening. Between November 2010 and March 2011, the pace of private-sector job growth picked up significantly and the unemployment rate fell by 1 percentage point to 8.8% after hovering near 10% since late 2009.

More recent data have shown troubling signs of renewed weaknesses in the labor market. In particular, the rate of layoffs, defined broadly as all forms of involuntary job loss, has increased. In this Economic Letter, we quantify recent increases in layoffs and examine their implications for the labor market going forward. Despite ongoing employment reductions among state and local governments, most of the recent surge in layoffs occurred among private-sector employers. Overall job loss rates have remained somewhat elevated through the summer, highlighting a labor market that continues to struggle.

An uptick in unemployment insurance claims

Recent concerns about deteriorating labor market conditions were prompted in part by an uptick in filings of new claims for unemployment insurance (UI) benefits. Nearly all civilian wage and salary workers are eligible to receive weekly UI benefits if they are temporarily or permanently laid off from a job through no fault of their own. By providing temporary, partial wage replacement to workers who are involuntarily unemployed, UI benefits help sustain purchasing power during cyclical downturns, thereby functioning as an automatic stabilizer for the economy (see Cleary, Kwok, and Valletta 2009).

Because employers tend to shed workers when their sales outlook deteriorates, new UI claims are quite responsive to overall economic conditions. In that respect, they serve as a timely and direct measure of layoffs and underlying changes in the strength of labor demand. Figure 1 depicts the level of new UI claims, expressed in four-week moving averages to smooth out weekly volatility. The series is subject to wide cyclical fluctuations, with sharp spikes evident around the times that recessions begin, followed by declines of varying steepness during recoveries. 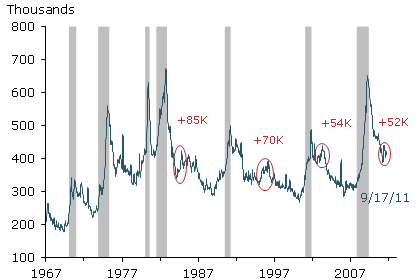 In addition to their cyclical pattern, the level of new UI claims commonly registers temporary increases during recoveries, as indicated by the four episodes circled in Figure 1. During the soft patch in the labor market from late February to mid-May 2011, the level of new UI claims rose by 52,000, from 388,000 to a peak of 440,000. Larger increases in new UI claims occurred during the past three economic recoveries, although two of these increases took place during periods of monetary tightening. During the earlier episodes in 1984 and late 1994 through early 1996, the increases in new UI claims were 85,000 and 70,000 respectively. Both episodes took place as monetary policymakers were tightening in response to concerns that the economy was overheating. The federal funds target rate rose by over a percentage point in both cases. By contrast, from July 2002 to May 2003, when the level of new UI claims rose by 54,000, the federal funds target fell by 0.50–0.75 percentage point. This episode of labor market weakness and monetary easing occurred as business activity was feeling the effects of a series of corporate accounting scandals, the SARS epidemic, and the buildup to the March 2003 invasion of Iraq.

The prior episodes of rising UI claims followed by sustained economic recovery indicate that the recent elevation of claims does not necessarily herald the start of a new recession—the dreaded “double dip.” Instead, such a rise can reflect a temporary soft patch in the road to recovery. Subsequent readings for 2011 show a partial and uneven reversal of the uptick, with the level of new claims declining noticeably early this summer, but then rising to a four-week average of about 420,000 as of mid-September. This is above the level of around 400,000 commonly associated with sustained job growth (see Atkinson 2010). That level had been reached earlier this year.

Other measures of job loss

Other broad measures of layoffs are available from monthly surveys conducted by the U.S. Bureau of Labor Statistics (BLS). The Current Population Survey (CPS), prepared jointly by the BLS and the U.S. Census Bureau, and issued since 1940, is the monthly household survey used to calculate official labor force statistics such as the unemployment rate. It is conducted during the week that includes the twelfth day of each month. Information on the duration and reason for unemployment spells can be used to identify individuals who experienced an involuntary job loss between survey dates. Figure 2 displays the resulting series, currently available through August 2011, along with the UI claims series converted from weekly to monthly frequency. Both series are expressed as a percentage of nonfarm payroll employment. The rate of job loss measured by UI claims is generally higher than the rate measured from the monthly CPS. This is due to the higher frequency of the UI series, which is measured weekly rather than monthly. This frequency causes the UI series to identify short unemployment spells that are missed in the monthly CPS data. In addition, UI eligibility and stated reasons for unemployment measured in the CPS don’t match each other perfectly. The gap between new UI claims and CPS job losses grows during recessions due to increases in the UI “take-up” rate, that is, the share of eligible individuals who apply for and receive UI benefits. When re-employment prospects are weak, a higher proportion of eligible individuals seek UI benefits (Cleary, Kwok, and Valletta 2009). 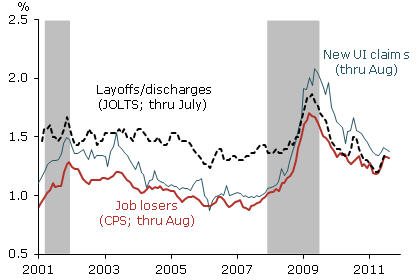 The CPS series, shown in Figure 2, confirms the increase in job loss from April through June. The measured increase in the pace of job loss is quite similar in the weekly UI claims and CPS series. Both increased by about 13% from their recent low points, which were late February to mid-May for the UI series and March to June for the CPS series. The July reduction in UI claims, followed by sideways movement in August, was matched by a slight decline in the level of the CPS job loss series since June.

The Job Openings and Labor Turnover Survey (JOLTS), conducted by the BLS since December 2000, offers an alternative measure of job loss based on establishment rather than household data. The survey is conducted monthly using a representative sample of about 16,000 establishments nationwide. This survey’s higher administrative burden causes its data release to lag the CPS by about six weeks. Data are currently available through July 2011. JOLTS provides data on the monthly number of involuntary separations initiated by employers, that is, layoffs and discharges, both temporary and permanent; voluntary quits; job vacancies; and hires. In contrast with the UI and CPS series, which capture only individuals who experience a spell of unemployment, the JOLTS layoffs/discharges series captures laid-off individuals who move directly into a new job or exit the labor force. Hence, the JOLTS job-loss measure generally exceeds the CPS measure, particularly during economic expansions when many individuals switch directly from job to job. However, the two series have largely converged during the current labor market downturn. The measured increase in the rate of job loss between the spring and mid-summer of 2011 is similar in the JOLTS data and the CPS and weekly UI series. 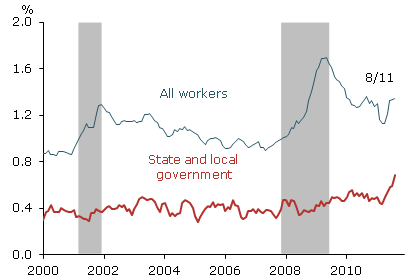 One potential source of the recent increase in job loss is the state and local government sector, which has been shrinking at an increased rate over the past few years as budget cuts have taken hold. UI claims are not broken out into public and private-sector categories, and the JOLTS data lag behind the other sources by a month or more. However, the underlying CPS microdata can be used to construct layoff series by sector. The resulting series for all workers and for state and local government employees are displayed in Figure 3. The all-workers series is the same as the CPS series from Figure 2 except for small variations arising from differences between the way the BLS calculates seasonal adjustments and our methodology. The pace of job losses among state and local government employees generally is well below that for the overall labor force, although it has shown a slight upward trend since mid-2008. The relatively low rate of job losses in state and local governments does not preclude overall employment reductions in this sector. Employment headcounts can be trimmed through normal attrition and by slowing or halting hiring. Thus, state and local payrolls are down about 1.5% over the past 12 months and 3.4% since their peak in August 2008.

Increases in new UI claims during the spring of 2011 have fueled concerns about renewed labor market weakness. Analyses of monthly job loss rates based on alternative BLS data sources confirm an increase in the pace of layoffs. A comparison of overall layoffs to job cuts in state and local governments suggests that the recent increase was concentrated among private-sector employers. All told, these indicators of elevated job loss rates in the spring and summer suggest a labor market that is moving sideways for the time being rather than recovering.

Katherine Kuang is a research associate in the Economic Research Department of the Federal Reserve Bank of San Francisco.