Credit: A Starring Role in the Downturn

Credit is a perennial understudy in models of the economy. But it became the protagonist in the Great Recession, reviving a role it had not played since the Great Depression. In fact, the central part played by credit in the downturn and weak recovery of recent years is not unusual. A study of 14 advanced economies over the past 140 years shows that financial crises have frequently led to severe and prolonged recessions. Shining the spotlight on credit turns out to be crucial in understanding recent economic events and the outlook.

From the Great Depression until the fall of Lehman Brothers, the United States did not experience any large-scale systemic banking crises. Modern macroeconomic models generally omitted banks and finance. But that did not seem to be a problem as long as the financial sector remained reasonably stable. In the waning years of the 20th century, there was ample support for such models. In the United States, output grew 4% annually, inflation ran about 2%, and unemployment was around 4%.

The Great Recession upended this paradigm. Attention has focused once again on leverage and excess credit—the “Achilles’ heel of capitalism,” in the words of James Tobin’s (1989) review of Hyman Minsky’s book Stabilizing the Unstable Economy. Of course, this was not the first such rude awakening. Economic history is replete with financial crises that force economists to relearn the role that credit plays in their genesis and aftermath. This Economic Letter reaches back 140 years, examining the experiences of 14 advanced countries, to document the enduring influence of credit in the economic fortunes of nations. Credit is critical to correctly understanding current economic events. The Great Recession broke the mold cast in the typical post-World War II downturn. The recovery appears to be following a different model as well.

The march of economic history is punctuated by a few landmark events. One worth highlighting is the dramatic explosion of credit that followed World War II. Schularick and Taylor (2012) show that, up until then, real private lending had grown apace with economic activity. After World War II, and especially when the Bretton Woods international monetary system broke down in the early 1970s, credit grew at about twice the rate of output. The outsized role played by the financial sector in the past few decades has become a focus of controversy in studies of the recent crisis and the post-crisis period.

A cursory review of the 2008 global financial crisis lends support to the notion that excess credit was the culprit. Countries that experienced the largest credit booms, such as the United Kingdom, Spain, the Baltic States, Ireland, and the United States, are experiencing the slowest recoveries. Economies that entered the recession with comparatively low leverage, such as Germany, Switzerland, and emerging market countries, have emerged from the downturn quickly. This raises a question: Is excess credit always a bad thing?

Credit and the boom

It is easy to cast excess credit formation as the villain while memories of near financial catastrophe are still so fresh. However, there is an important counterargument that must be considered. To the extent that a sophisticated financial sector improves apportionment of resources and pricing of risk, credit can result in better economic outcomes. Research by Jordà, Schularick, and Taylor (2011) supports this view. This work uses the excess growth rate of real private lending relative to real GDP growth per capita as a proxy for leverage. It finds that periods with higher-than-average leverage tend to be periods of higher-than-average economic performance.

It is difficult to separate cause and effect. Does faster credit formation lead to faster growth or is it the other way around? Even assuming credit facilitates growth, are these gains enough to compensate for deeper recessions and the occasional financial crisis? Let’s first consider the type of recession that follows a credit binge.

Credit and the bust

Is the intensity of credit creation in the expansion phase systematically related to the severity of the subsequent recession? And is there a difference between how credit behaves in an ordinary recession versus how it performs in a recession associated with a financial crisis? The answers to both questions appear to be yes, and therein lie the lessons that can inform the economic outlook.

Broadly speaking, in a financial crisis, a large fraction of banking system capital becomes depleted. However, directly measuring such an effect can be difficult. An alternative is to look at the responses to capital depletion. Laeven and Valencia (2010) argue that, in a financial crisis, the banking system experiences significant financial distress that compels banking authorities to intervene. Examples of such intervention include liquidity support, guarantees on bank liabilities, asset purchases, nationalizations, restructuring, deposit freezes, and bank holidays. All these occurred after Lehman Brothers failed. Some were implemented even earlier, with the sale of Bear Stearns.

Jordà, Schularick, and Taylor (2011) find that, regardless of the genesis of the recession, more leverage results in deeper recessions and slower recoveries. Moreover, in financial crises, leverage is associated with a steeper and more persistent decline in consumption as households try to repair their balance sheets. Since consumption constitutes more than two-thirds of GDP, it is not surprising that losses in output follow a similar pattern.

Weakness in incomes and the process of deleveraging put downward pressure on prices, even in an environment of lower-than-normal interest rates that lasts several years. Looser monetary conditions take a long time to gain traction. During the first year of the recession, private real lending declines by a similar amount regardless of whether the genesis of recession is financial or nonfinancial. However, it takes on average about five years before lending approaches its pre-recession levels in recessions associated with financial crises, while lending usually recovers more quickly in nonfinancial recessions.

Simultaneous declines in the price and the quantity of credit are considered standard features of shrinking demand for credit. Such declines would be consistent with the behavior of consumption and prices noted earlier. However, Jordà, Schularick, and Taylor (2011) only collects data on interest rates for government securities, not for interest rates charged to private borrowers. Typical “flight to quality” responses of panicked investors into government securities and rationing of credit instead of market-clearing interest rates are examples of developments common in financial crises that can complicate credit trends.

In the current environment of lower-than-normal interest rates, it is perhaps investment, measured as a percentage of GDP, that has suffered the steepest and most persistent declines. Investment is the variable that fluctuates most over the course of the business cycle. Normally, investment recovers within two years of the start of the recession. However, it takes substantially longer, often several more years, for investment to recover in a financial recession. That has serious consequences. A slower pace of capital accumulation usually is detrimental to the long-run productive capacity of economies.

Lessons for the outlook

We are unlikely to learn how the United States will recover from the Great Recession by examining other post-World War II downturns. In the United States, the past six decades have completely lacked another financial event like the one experienced from 2007 to 2009. Two examples of how the economy has fared since the start of the 2007 recession illustrate this. 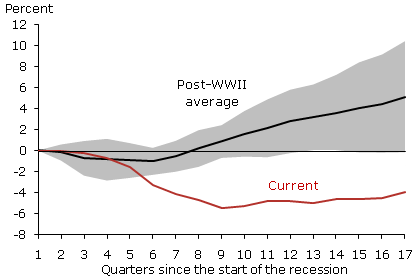 Figure 1 shows employment and Figure 2 investment in the 17 quarters following the start of the average post-World War II recession and the 17 quarters since the onset of the recent recession. These figures display how much more severe and prolonged the falls in employment and investment have been in the most recent recession and recovery, eclipsing anything else observed in the United States during the post-World War II period.

Importantly, a year into the recent recession, conditions did not seem substantially different than the average post-World War II downturn. But the financial crisis that followed the fall of Lehman Brothers appears to have extended the recession by an extra year and sunk the economy to extraordinary depths. Today employment is about 10% and investment 30% below where they were on average at similar points after other postwar recessions. Much of the slow recovery in investment is in structures and residential housing, as might be expected. However, investment in equipment has also rebounded somewhat more slowly than in previous recoveries. 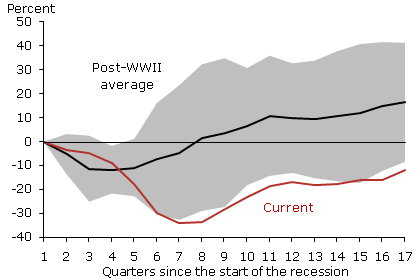 What do the diverse histories of 14 advanced economies tell us? Quantifying the leverage built up in the 2001–07 U.S. expansion, we can compute how much the financial crisis is weighing on the recovery relative to the norm. Data on leverage leading up to the Great Recession and the Jordà, Schularick, and Taylor (2011) analysis suggest that, even years after the recession ended, economic performance should be subdued, as we are now experiencing.

Any forecast that assumes the recovery from the Great Recession will resemble previous post-World War II recoveries runs the risk of overstating future economic growth, lending activity, interest rates, investment, and inflation. The data suggest that, this time around, credit cannot be considered a secondary effect. The interaction between the financial system and the real economy remains a weak spot of modern macroeconomic modeling. A careful analysis of 14 advanced economies over 140 years—data that extend far beyond the narrow post-World War II experience of the United States—reveals that the role of credit is sometimes central to understanding the business cycle.