Consumer Debt and the Economic Recovery

A key ingredient of an economic recovery is a pickup in household spending supported by increased consumer debt. As the current economic recovery has struggled to take hold, household debt levels have grown little. Some evidence indicates that households adjusted debt in line with house price movements in their local markets. However, the data show that consumer debt cutbacks were largest among households that defaulted on mortgages or had lower credit scores, suggesting that household borrowing also was restricted by tight aggregate credit supply.

One of the main questions during the current economic recovery has been the uncertain state of consumer finances. House price declines beginning in about 2006 caused a sharp drop in household net worth and the value of debt backed by houses. U.S. household debt fell substantially following this shock to wealth. Since 2008, total household liabilities have fallen by about 7%, or nearly $1 trillion, according to Federal Reserve flow of funds data.

Why did such a large adjustment in household debt take place? When considering the appropriate amount of debt for a household, economists look at how borrowing can support different consumption paths over the course of a household’s existence. Often, households are assumed to prefer consumption paths that are smooth over time. When households are newly formed, demand for durable consumption goods such as cars, furniture, and houses tends to be high relative to income and savings. It’s natural that these households would want to borrow against future income and wealth so they can consume these goods in the present. Thus, a household’s expectations about its income and wealth over the course of its existence are key determinants of its debt level. If shocks to lifetime income and wealth, like the ones recently experienced, are perceived to be long-lasting, household members may reconsider their consumption plans and the amount of debt they are prepared to take on.

This way of thinking about household financial decisions emphasizes how debt levels respond to permanent shocks. But other factors can significantly affect borrowing decisions, some of which may be especially important now. Households with unemployed members may seek to borrow to keep up their current consumption levels until the lost job is replaced. Hurst and Stafford (2004) find strong evidence that homeowners with equity tend to draw down home equity credit lines for this purpose.

Household borrowing is also shaped by the willingness of lenders to provide funding. The same factors that cause household income and net worth to fall may translate into losses for lenders. When home values fall, some mortgage borrowers may have incentive to default. Unemployment spells may be longer than expected or occur more frequently. Under such circumstances, lenders may have less tolerance for risk, reducing the ability of households to borrow.

These factors also point to ways that household debt can fall. First, households can decide to consume less and save more. Second, households can walk away from debt via bankruptcy or foreclosure on their homes. A third mechanism, operating at the aggregate level, can also reduce household debt. The losses financial institutions experience when households go through bankruptcy or foreclosure may prompt them to cut back on lending to households, leading to a contraction in the overall supply of credit. Thus, when consumers want to borrow to smooth out temporary income or employment shocks, they may find that lenders can’t or won’t extend credit.

These shocks to credit weigh on the overall economy by reducing aggregate demand. Thus, policy measures may have some scope to limit damage to the economy. It is important though for policymakers to understand the channels by which deleveraging is taking place. If deleveraging is occurring because of a contraction in the supply of credit, then the policy prescriptions may be different than if the main factor behind deleveraging were weak consumer demand for credit. For example, if banks are suddenly less willing to make loans to consumers, then policies that attack bank financial problems directly or help consumers qualify for stricter underwriting terms may be appropriate, along with the traditional monetary policy prescription of lowering interest rates.

Why then did households trim consumer debt? As described above, a natural explanation might stem from the large shock to household wealth that occurred after the housing boom began to collapse in 2006, which reduced demand for credit. On the other hand, many of the factors weighing on household demand for debt are probably also affecting the overall supply of credit. One way to investigate why consumers are deleveraging uses the large variation in house price appreciation among counties over the past decade. Specifically, one can examine whether there have been differences in household debt accumulation between geographical areas that saw the biggest house price swings since 2001 and those areas where the housing boom and bust were milder. 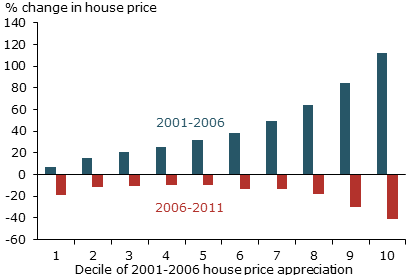 Figure 1 shows that counties where house prices rose the most between 2001 and 2006 subsequently had the largest declines in house prices. These counties with the largest house price depreciation also experienced the largest declines in nonmortgage consumer debt during the bust, with the fall especially notable among households that defaulted on mortgages. This pattern is consistent with theory, which holds that the incentive to reduce debt should have been greatest for households living in these high-appreciation counties.

Mian, Rao, and Sufi (2011) examine this same county-level variation in house prices in their widely cited study of consumer deleveraging. Here, I focus on how different types of households accumulate debt, both within and across counties.

I base my analysis on U.S. consumer credit data on nonmortgage debt compiled by the credit reporting agency Equifax from the first quarter of 1999 to the fourth quarter of 2011, essentially the entire U.S. population with credit histories. The New York Federal Reserve Bank has constructed a random sample using 5% of the consumers in the Equifax data base in a given quarter. The New York Fed sample is designed to accurately represent the demographic characteristics of the broader credit pool (see Lee and Van der Klaauw 2010).

To make the New York Fed data set more manageable, I used a 10% random sample, which translates into a 0.5% random sample of the total Equifax data file. Consumers are sorted by home zip codes. The final sample consists of over 800,000 individuals living in more than 700 counties nationwide.

In the fourth quarter of 2011, of the nearly $12 trillion in total consumer debt, about 70% consisted of mortgages, according to the data sample. Home equity lines and home equity installment loans accounted for another 10%. In the nonmortgage category, auto loans represented 7% and bank credit card balances 6% of total consumer debt. 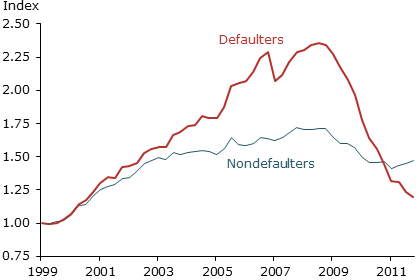 Analysis of the data uncovers a number of interesting patterns in the evolution of household debt. For example, as Figure 2 shows, borrowers who defaulted at some point in the sample period increased their nonmortgage debt loads during the housing boom at a much faster pace than did nondefaulting borrowers. To a large extent, this ramping up of nonmortgage debt levels occurred among younger borrowers and those with lower credit scores, that is, subprime borrowers. The reverse occurred once the housing boom ended. Mortgage borrowers who defaulted reduced their nonmortgage debt levels at a much faster pace than nondefaulters. This decline in debt most likely occurred because defaulters lost access to credit.

I also compare the behavior of borrowers in different geographical markets who never defaulted on their mortgages or declared bankruptcy. Their borrowing patterns during the recession and recovery tend to reflect broader economic conditions and house price trends in their local markets rather than individual credit circumstances. 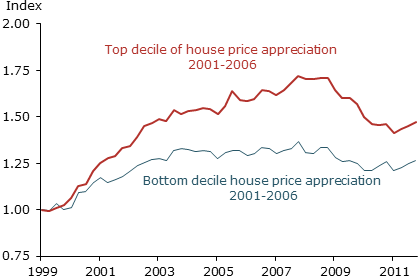 Specifically, I compare borrowers from counties in the lowest tenth of house price appreciation in 2001–06 with borrowers in counties in the top tenth, based on CoreLogic house price data. Figure 3 shows that the broad pattern for house prices, shown in Figure 1, also held for nonmortgage debt. Borrowing increased relatively more in higher-appreciation counties during the boom and fell somewhat faster following the financial crisis, in line with the deleveraging story. However, the differences in deleveraging after the financial crisis do not appear to be large, given that house prices fell about twice as much in the high-appreciation counties than in the low-appreciation counties. Moreover, since mid-2009, total nonmortgage debt has behaved similarly for nondefaulting borrowers in these different markets.

I have noted county-level differences in nonmortgage borrowing for people who never defaulted based on the degree of boom-period house price appreciation. But are these differences due to credit demand or credit supply? One way to answer the question is to look more closely at consumers across the borrower risk spectrum. Very large differences are evident between the debt patterns of subprime consumers, that is, those with credit scores below 650, and prime borrowers with scores above 650. 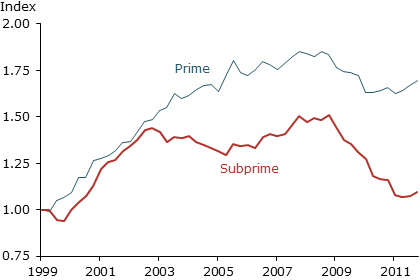 Figure 4 shows debt accumulation paths for different categories of borrowers within the same county market groupings. Thus, all borrowers in this analysis, including subprime and prime, were exposed to similar housing market and economic conditions before the recession. Yet Figure 4 suggests that these similarly exposed borrowers fared very differently during the recession, depending on their credit profiles.

These same basic patterns in Figure 4 also emerge when I plot nonmortgage debt levels for prime and subprime borrowers living in counties in the low tenths of 2001–06 house price appreciation. Either subprime consumers in the same markets had systematically less demand for credit than prime borrowers or, more likely, lenders were less willing to lend to these consumers over the sample period.

Defining subprime as borrowers with credit scores below 650 is arbitrary. With a lower cutoff for subprime, the decline in debt would be more dramatic. The relatively mild decline in prime nonmortgage debt is due mainly to renewed demand from this group of borrowers, who were apparently willing and able to take advantage of low interest rates.

Consumer debt fell substantially during the recent recession and recovery. The extent of deleveraging in consumer nonmortgage debt differs by households in different markets in a way that is consistent with the idea that highly indebted households seek to reduce debt loads when house prices fall substantially. However, the most important differences do not appear to depend on geography, that is, differences in past house price appreciation. Rather they appear to depend on the type of borrower. Within a county, borrowers who defaulted on mortgages tended to experience much larger reductions in nonmortgage debt than borrowers who stayed current on mortgages. Borrowers with low credit scores experienced larger reductions in nonmortgage debt than borrowers with high credit scores. These results suggest that tighter credit conditions also are probably restricting the flow of credit to consumers. Moreover, these changes in credit supply appear to be working at an aggregate rather than a regional level (see Williams 2012). The early signs of recovery in the housing market are certainly welcome. But this analysis suggests that households are still facing credit supply headwinds.