Historically, oil and natural gas prices have moved hand in hand. However, in the past few years, while oil prices climbed to near record peaks, natural gas prices fell to levels not seen since the mid-1970s as a result of new hydraulic fracturing technology. U.S. consumer energy expenditures are still mainly driven by oil prices, so household energy bills got little relief as natural gas prices fell. Moreover, even though the United States has trimmed crude oil imports, they still equal a substantial share of gross domestic product. 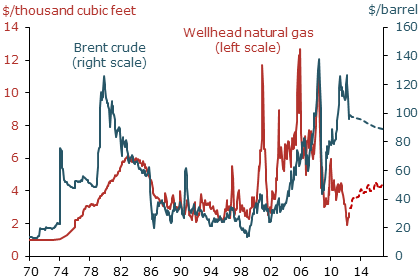 The price of oil approached record high levels earlier this year. At the same time though, natural gas prices reached their lowest level since the mid-1970s, as Figure 1 shows. How has this price divergence affected U.S. consumer energy costs? Have households and businesses moved away from expensive oil to cheaper natural gas to meet their energy needs? In this Economic Letter, we examine the extent to which U.S. consumers already have benefited by substituting natural gas for oil, and how much they potentially stand to gain if they were to continue to do so. We also analyze recent trends in domestic crude oil production and imports in order to grasp how much the United States pays foreign producers for oil.

Oil prices neared historically high levels earlier this year. From December 2008 to their recent peak in March 2012, Brent crude prices more than tripled. This included a 28% jump during the first four months of 2011, when oil prices responded to Middle East oil supply disruptions by climbing to $124 per barrel. It also includes a 17% increase in the first three months of 2012. Since that peak, crude oil prices have dropped 25%. But they are still up 137% from their most recent low in December 2008. By contrast, since January 2010, natural gas fell from $5.67 per thousand cubic feet to $2.42, or 57%, thanks in large part to the growing use of hydraulic fracturing technology. This divergence in oil and natural gas prices is unprecedented in magnitude and duration. Moreover, it is expected to persist throughout the year, according to prices in the futures market. 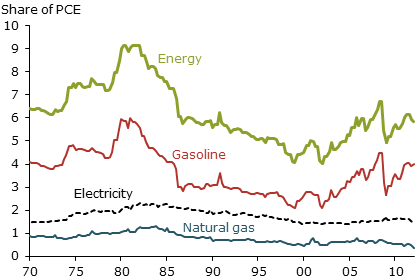 Figure 3
Relative use of oil by sector 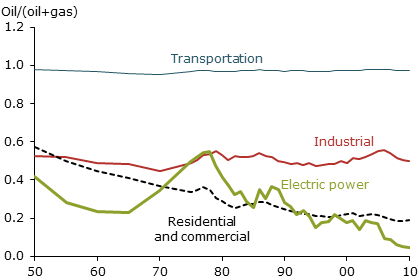 Shouldn’t the large change in the relative prices of oil and natural gas induce businesses and consumers to substitute gas for oil? Figure 3 indicates that the ability to do so is limited, at least in the near term. In the past, electrical utilities were the only sector that substituted gas for oil. But this substitution has mostly been completed, leaving little scope for further decline in the share of oil in electricity production.

However, in the long run, a persistent price divergence might encourage substitution in other sectors. Transportation in particular already has the technology to use natural gas and the current share of oil in the sector is close to 100%. In addition, the industrial sector could potentially make greater use of natural gas. Still, given the elaborate infrastructure devoted to petroleum, none of these changes can happen quickly.

How much do we pay for imported oil?

If the petroleum consumed in the United States were all produced domestically, an increase in oil prices would make the producers and sellers of oil richer and the consumers of oil poorer. In such a case, there would be no change in aggregate U.S. demand as long as sellers and buyers had the same propensity to consume other products. However, the situation changes when some share of U.S. oil consumption is imported. In that case, when oil prices rise, foreign producers get richer at the expense of U.S. consumers. This income transfer to the rest of the world implies a reduction in U.S. purchasing power

But is the United States less dependent on foreign oil than it was in the past? As Figure 4 demonstrates, net imports of petroleum have been decreasing since 2005. Some of this decline can be attributed to a slight increase in domestic oil production. But most of it is the result of reduced consumption. When demand for oil declines, the first response is a reduction in imports. By contrast, production is limited not by demand, but by capacity. 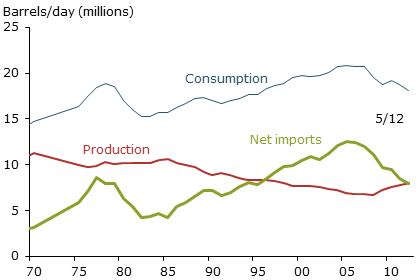 Implications for U.S. growth and inflation

Figure 2 shows that changes in expenditures for oil dominate overall energy expenditure movements. And Figure 4 shows the high share of imported oil that results in a sizable income transfer abroad. What then is the effect of rising oil prices on U.S. growth and inflation?

Given oil’s importance as an energy source and its high share in energy expenditures, an increase in oil prices raises consumer energy costs and reduces household purchasing power. At the same time, an increase in oil prices raises the cost of producing domestic goods. These two channels of transmission tend to dampen output. But the effect on inflation is ambiguous because the prices of goods and services can fall due to the reduction in economic activity.

Recent economic literature has looked closely at this question. Evans and Fisher (2011) show that, in the past 25 years, oil shocks have had little impact on core inflation and that headline inflation tends to return to low levels. Blanchard and Galí (2010) also find little evidence of the second-round effect of oil price increases that would occur if workers responded by demanding higher wages, in turn leading businesses to charge higher prices. They conclude that, since the mid-1980s, oil price shocks have had little effect on nominal wages, limiting the overall inflationary effects in the United States. By contrast, in Europe, second-round effects are substantial. Unlike in Europe, U.S. labor unions are relatively weak and wages are not indexed. Finally, as Hale, Hobijn, and Raina (2012) show, pass-through from energy prices to other consumer goods prices is limited. As a result, the effects on the overall economy are also limited.

As for economic growth, recent papers argue that the effects of an oil price increase on GDP are smaller than they were during the 1980s. Blanchard and Galí (2010) show that the U.S. economy has become more flexible and that real-wage rigidities have been reduced. Therefore, the effect of an oil shock can be partially absorbed by lowering real wages, implying a smaller increase in unemployment and a correspondingly smaller reduction in real activity. In addition, Bodenstein, Guerrieri, and Gust (2010) show that, when the central bank’s policy rate is at the zero lower bound, as it is now in the United States, the recessionary effects of oil shocks are further reduced. At the zero lower bound, increases in inflation would reduce real interest rates, counteracting the recessionary effects and providing an automatic stimulus to the economy.

Conclusion: Is this time different?

Although crude oil prices have fallen over the past three months, the price level remains high by historical standards. By contrast, natural gas prices have fallen dramatically since 2010. However, oil remains the main U.S. energy source. In the near term, the decrease in natural gas prices appears to be bringing only limited offsetting benefits to consumers and producers. Moreover, petroleum imports mean that the United States pays overseas producers an amount equal to a substantial share of GDP. Thus, the impact of oil price increases on consumer finances and on the U.S. economy as a whole is still substantial.

Recent academic literature shows that there are two mitigating factors that make the contractionary effects of higher oil prices smaller than usual. First, the Federal Reserve’s policy rate is at the zero lower bound. And, second, the inflation effects are expected to be very limited.

Blanchard, Olivier, and Jordi Galí. 2010. “The Macroeconomic Effects of Oil Price Shocks: Why Are the 2000s So Different from the 1970s?” In International Dimensions of Monetary Policy, eds. J. Galí and M. Gertler. Chicago: University of Chicago Press, pp. 373–421.

Evans, Charles, and Jonas Fisher. 2011. “What Are the Implications of Rising Commodity Prices for Inflation and Monetary Policy?” Chicago Fed Letter 286 (May).