China has been running large current account surpluses over the past decade. At the same time, it has tightly controlled its exchange rate and prohibited the private sector from freely trading foreign assets. Many commentators argue that China’s large current account surpluses reflect substantial undervaluation of its currency, the renminbi (for example, see Goldstein and Lardy 2006). Although the renminbi has appreciated moderately since China began a gradual upward adjustment of the exchange rate in 2005, further appreciation is widely expected. This expectation, coupled with continuing current account surpluses, has produced substantial foreign capital flows into China. 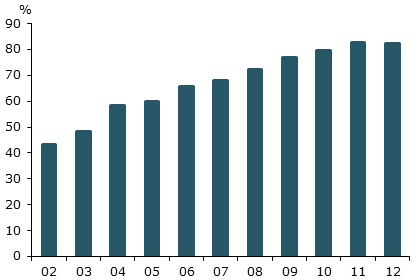 Source: The People’s Bank of China; 2012 value based on data up to June.

The People’s Bank of China (PBOC), the country’s central bank, absorbs inflows of foreign capital by purchasing the foreign currency revenues of exporters at the prevailing exchange rate. As a result, the PBOC has accumulated over $3 trillion in foreign currency reserves. Figure 1 shows that foreign currency reserves as a share of total PBOC assets has grown from just over 40% in 2002 to more than 80% in 2011. That has caused the PBOC’s balance sheet to become more sensitive to changes in financial conditions outside China.

All else equal, PBOC purchases of foreign assets increase the domestic money supply. To avoid inflation, the PBOC usually brings the money supply back down by selling an equal value of domestic currency bonds, a practice known as sterilization. But the nominal yields on the PBOC’s foreign currency holdings are generally different from the nominal interest rates on domestic bonds. That means that sterilization can produce net gains or losses for the central bank, depending on how interest rates on foreign currency reserves compare with rates on domestic bonds.

Consider the example of a Chinese exporter earning $100 in U.S. currency from sales of goods to foreign buyers. Under China’s closed capital account, the exporter is required to sell the $100 to the central bank at prevailing exchange rates, which currently equals approximately 600 renminbi in domestic currency. The central bank then invests its $100 in foreign assets, say U.S. Treasury bonds. If the central bank did nothing further, then China’s money supply would go up by 600 renminbi. To avoid inflation, the central bank sterilizes the transaction, that is, it withdraws 600 renminbi from circulation by selling domestic assets worth that amount and retiring the proceeds.

But what if the renminbi-denominated assets pay a higher interest rate than the U.S. Treasury bond? In that case, the central bank exchanges a higher-yielding asset for a lower-yielding asset, posting a loss. Thus, the PBOC faces a tradeoff. It either takes a loss from sterilization or it risks increasing inflation by expanding the money supply. Importantly, this tradeoff only happens under a closed capital account regime in which exporters can’t hold foreign assets. 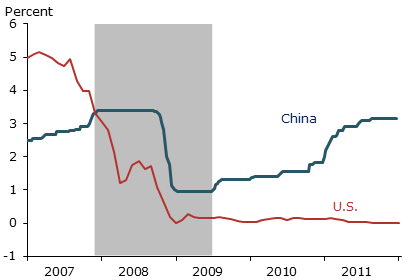 Figure 2 shows the three-month Treasury bill rate in the United States and the three-month Central Bank (CB) bill rate in China. In 2006–07, before the U.S. financial crisis, Treasury bill rates were higher than CB bill rates. The PBOC apparently gained by financing its purchases of foreign currency inflows through sales of domestic bonds (see, for example, Prasad and Wei 2007). However, since 2008, interest rates in Western economies have declined substantially. Chinese interest rates are now more than three percentage points higher than rates on U.S. Treasury securities of comparable maturity. Thus, the 2011 current account surplus, equaling a net inflow of $360 billion, translated into an estimated net PBOC loss of over $10 billion.

These developments raise several questions. First, how should Chinese monetary policy respond to these changes in global financial conditions? Second, what does the apparently greater potential for shocks from outside China mean for policy reforms, either through opening China’s capital account or by allowing the exchange rate to float freely? These questions are important not only for China’s monetary policy, but also for understanding the implications of alternative reform paths the Chinese government may choose to follow.

In a recent paper, Chang, Liu, and Spiegel (2012) examine how relative changes in Chinese and external interest rates affect optimal monetary policy. Under optimal monetary policy, the central bank minimizes losses stemming from fluctuations of inflation, output, and the real value of foreign reserves. Unsurprisingly, when sterilization of capital inflows is costly, the central bank tends to do less of it. However, this implies that the central bank responds to capital inflows by increasing the money supply, which could potentially boost Chinese inflation. This leaves the PBOC with the following policy questions: How much of the foreign capital inflow should it finance through domestic bond sales? And how much should it finance by allowing the money supply to increase?

In Chang, Liu, and Spiegel (2012), the authors create a model to examine the macroeconomic impact of a sudden decline in world interest rates, similar to that which took place during and after the global financial crisis. Lower world interest rates reduce the return on foreign assets, which causes China’s interest income to dip and its current account surplus to shrink. In turn, the shrinking current account surplus causes national income to decline, which reduces real economic activity unless the Chinese government stimulates the economy. In addition, inflation declines as aggregate demand falls.

The decline in foreign interest rates also raises the cost of sterilization. As world interest rates fall, the optimum policy would finance a smaller share of the capital inflow through sales of domestic bonds. Instead, it would increase the share financed by expanding the money supply. Expanding the money supply boosts real economic activity in the short run. But it also causes inflation to tick up. That is what China experienced in the years immediately following the global financial crisis.

With an open capital account, the central bank no longer needs to buy all foreign capital inflows, so it does not intervene in the foreign asset market. Given the decline in world interest rates, China’s earnings on foreign assets fall, reducing its current account surplus. This leads to lower national income, lower aggregate demand, and a short-run fall in inflation. Since the nominal exchange rate is fixed, the drop in inflation results in real currency depreciation, softening the effect of a decline in the current account surplus.

What about a policy reform in which capital controls stay in place, but the exchange rate is allowed to float? In this case, the central bank reacts to increased sterilization costs following a decline in foreign interest rates by engineering a substantial appreciation of the domestic currency. Since prices and wages adjust slowly, nominal appreciation implies large real appreciation and a large reduction in the current account surplus as Chinese goods become more expensive for foreign buyers. The falling current account surplus reduces foreign asset inflows, reducing sterilization costs.

The distinction between policy prescriptions that emphasize a floating exchange rate and those recommended by Chang, Liu, and Spiegel reflects the sterilization costs sometimes associated with a closed capital account. Prior to the financial crisis, these costs were negative, meaning that the government apparently benefited from sterilization. However, the sharp global interest rate downturn after the crisis turned the benefit into a substantial cost and made a floating nominal exchange rate much less desirable on its own. Nevertheless, the best policy outcome in the Chang, Liu, and Spiegel framework still comes from letting the exchange rate float and opening the capital account.

China sets its monetary policy in a context of capital controls and exchange rate targets. Chang, Liu, and Spiegel (2012) show that optimal Chinese monetary policy responds to sterilization costs. In particular, if foreign interest rates fall as they did during and after the global financial crisis, easier monetary policy and higher inflation are consistent with optimal policy. In liberalizing its economy, China has three alternatives: opening the capital account, letting the exchange rate float, or doing both simultaneously. The last option, that is, combining an open capital account with a floating exchange rate, best weathers a foreign interest rate shock. Most of the benefits stem from liberalizing the capital account. With an open capital account, the central bank does not need to sterilize purchases of foreign capital inflows. That gives the central bank flexibility in responding to the macroeconomic effects of changing global financial conditions.