Will the Jobless Rate Drop Take a Break?

In January, the U.S. Bureau of Labor Statistics significantly reduced its projections for medium-term labor force participation. The revision implies that recent participation declines have largely been due to long-term trends rather than business-cycle effects. However, as the economy recovers, some discouraged workers may return to the labor force, boosting participation beyond the Bureau’s forecast. Given current job creation rates, if workers who want a job but are not actively looking join the labor force, the unemployment rate could stop falling in the short term.

Roughly every two years, the U.S. Bureau of Labor Statistics (BLS) publishes medium-term labor force projections that reflect its views on labor force participation and population growth. The BLS’s January 2012 release included significant downward revisions to earlier labor force projections. The revisions mostly reflected lower projections of the percentages of young and prime-working-age people likely to be working or looking for work in coming years. Behind this outlook lies an important assumption. The BLS attributes much of these groups’ recent declines in labor force participation to ongoing secular trends rather than to transitory effects of the recent economic downturn. This Economic Letter assesses this view and examines how alternative participation projections might affect the unemployment rate in the years ahead.

Labor force participation is defined as the percentage of the noninstitutional working-age population 16 and older that is working or actively looking for work. Participation rates vary by age, gender, and ethnicity. For example, younger and older workers participate less than prime-age workers. Males participate more than females. And Hispanic males participate at higher rates than white or black males. 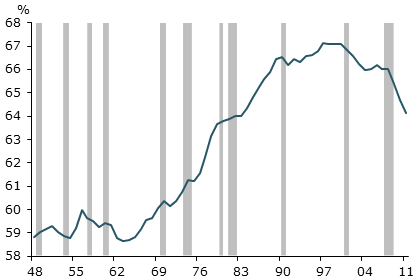 Cyclical economic fluctuations can also affect labor force participation. During business-cycle downturns, unemployed workers may temporarily leave the labor force. Poor job market opportunities may discourage some. Others may want to learn new skills. As job market conditions improve, such workers are likely to return. By contrast, in very hot job markets, such as in the late 1990s, people normally outside the labor market may seek employment, including those who take care of children, work as unpaid volunteers, or are retired.

The interplay of all of these factors can be seen in Figure 1, which shows the aggregate annual labor force participation rate from 1948 through 2011. Periods of recession dated by the National Bureau of Economic Research (NBER) are shown in gray.

Trend vs. cycle: Is this time different?

The extent and timing of the recent drop in participation have been difficult to interpret conclusively. Many analysts agree that at least some of the recent drop has been cyclical. But they disagree on how much the decrease stems from the weak labor market during the recession and recovery. Estimates of the effect of these cyclical factors range from a third to half the total drop in participation (Davig, Maki, and Newland 2012; Aaronson, Davis, and Hu 2012; Van Zandweghe 2012). Some analysts argue that, when these workers return to the labor force, that will completely offset ongoing downward structural and demographic trends (Stehn 2012).

The BLS implicitly sided with the camp that emphasizes secular factors when it released its regular medium-term labor force outlook in January. The agency substantially reduced its projections for labor force participation from its previous forecast made in 2009. This suggests that the BLS believes that much of the recent decline in participation reflects a bigger permanent reduction in the size of the labor force than it expected in 2009.

Figure 2
Percentage of the population that wants a job 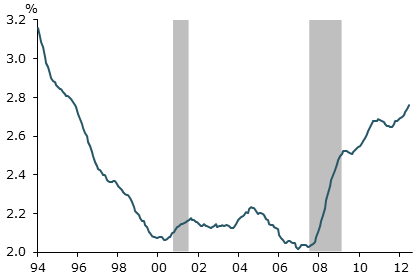 Thus, the BLS has interpreted most of the recent reduction in labor force participation as a secular change in trend rather than a transitory decline. One way to assess whether this projection will be accurate is to look at survey data from the monthly Current Population Survey (CPS). Each month the survey asks individuals in a representative sample of U.S. households whether they are working, looking for work, or out of the labor force. Since 1994, the survey has asked those who say they are out of the labor force whether they currently want a job. Figure 2 plots the number of working-age adults outside the labor force who say they want a job as a percentage of the total noninstitutionalized civilian population 16 and older. Gray bars indicate recessions.

As the figure shows, the current share of the adult population that is out of the labor force but wants a job is elevated, but not unusually so by historical standards. In the previous expansion, from December 2001 through November 2007, an average 2.1% of the population wanted a job but was not in the labor force. This share rose sharply starting in 2008. Currently it is 0.7 percentage point above the average level from 2001–07, nearly matching the 0.8 percentage point cyclical shortfall implied in the BLS January 2012 projections. Based on these numbers, the BLS projections appear well-aligned with the historical behavior of people marginally attached to the labor force.

Will the unemployment rate stall in 2013?

Nearly 6.9 million people report being out of the labor force but wanting a job. As economic conditions improve, it is reasonable to expect that some of these workers will move back into the labor force or join for the first time. Based on historical averages, about 2.1 million of them could enter the job market. These potential entrants will either take jobs directly or join the labor force as unemployed workers actively searching for jobs.

The near-term path of unemployment will reflect both how quickly potential workers enter the labor force and the rate at which jobs are created. Assume that the average pace of job creation over the past two years continues. We can then project the path of the unemployment rate over the next year according to the rate at which the 2.1 million potential workers enter the labor force.

The recent recession was unusual in its depth and its duration. Labor market conditions have remained difficult for a long time. As a result, large numbers of discouraged workers have stopped looking for jobs. A big unknown is whether these workers will stay out of the labor force permanently or enter as the economy recovers. If these workers join the labor force, increasing participation could have a major impact on the unemployment rate in the coming years.

Mary Daly is a group vice president and associate director of research in the Economic Research Department of the Federal Reserve Bank of San Francisco.