This Economic Letter examines uncertainty about the future course of short-term interest rates, that is, the expected path of Federal Reserve monetary policy. The analysis uses market-based measures of uncertainty from financial derivatives, such as options. A key question is how Fed policy actions affect interest rate uncertainty. The Letter considers both conventional monetary policy and unconventional policies such as large-scale asset purchases and forward guidance on future policy (see Williams 2011).

Options are available for a variety of instruments. This Letter focuses on interest rate uncertainty, calculated based on prices of Eurodollar options, among the world’s most actively traded interest rate options. The underlying security is a Eurodollar futures contract, whose payoff is tied to the three-month London interbank offered rate (LIBOR), one of the world’s leading short-term interest rate benchmarks. Eurodollar futures reflect expectations of the future value of LIBOR. Eurodollar options with the same maturity as the underlying futures contract are, in effect, options on LIBOR. Their price depends on uncertainty about LIBOR’s future value. This uncertainty is reported as “implied volatility,” which means the variability of the underlying LIBOR rate implied by the option price.

LIBOR measures the average interest rate that banks must pay to borrow overnight in the intrabank market. It is closely tied to the Fed’s main policy rate, the federal funds rate. However, the spread between federal funds and LIBOR can rise and become more volatile when financial markets are stressed. To measure expectations for the federal funds rate, one can adjust the Eurodollar futures rates using derivative financial instruments known as LIBOR-fed funds basis swaps. However, Eurodollar-based measures cannot easily be adjusted for uncertainty. Hence, uncertainty measures reflect not only uncertainty about future monetary policy, but also uncertainty about future bank funding conditions and financial market stress.

The suspense around FOMC announcements

Fed monetary policy decisions are important drivers of interest rates at all maturities. Markets are typically in a state of heightened anticipation before these decisions are announced, as evidenced by reports in the financial press. This heightened financial market uncertainty ahead of announcements by the Fed’s policy body, the Federal Open Market Committee (FOMC), is clearly seen in the data. For example, over a sample of announcements from January 1989 to December 2003, market uncertainty about future policy, measured by implied volatility in Eurodollar options for a six-month horizon, typically decreased on the day of FOMC policy announcements (see Swanson 2006).

A statistical examination of this effect across quarterly horizons from 6 to 18 months using a new and longer data set confirms and strengthens this finding. It shows a statistically significant pattern of substantial decreases in interest rate uncertainty around FOMC announcements. The pattern holds regardless of whether the announcements surprised markets or were in line with market expectations. Uncertainty about the future course of short-term interest rates is typically elevated ahead of FOMC decisions. Much of this uncertainty is resolved when the FOMC issues its public statement. 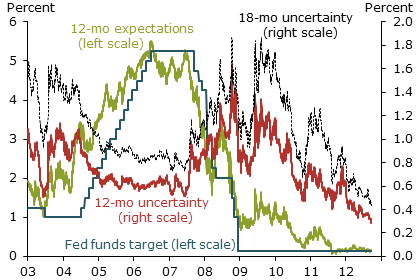 The period when the federal funds rate has been near zero—the zero lower bound—shows a novel pattern, particularly since August 2011, when the FOMC began spelling out how long it anticipated the rate would stay exceptionally low. Expectations about future monetary policy and uncertainty around these expectations have moved closely together, both reaching record lows. This pattern partly reflects the zero lower bound’s constraints, which put a floor under the federal funds rate. Implied volatility will necessarily shrink when policy expectations decrease toward zero. Consequently, it is hard to interpret movements in interest rate uncertainty at the zero lower bound. In such a situation, uncertainty about the course of the economy can be quite high, as has been evident during the U.S. economic recovery and the European sovereign debt crisis. At the same time though, interest rate uncertainty has been very low over the horizons when the policy rate is expected to stay near zero.

With the policy rate at its lower bound, the Fed has used alternative ways to provide monetary stimulus. It has purchased large quantities of Treasury and mortgage-related securities to push down longer-term interest rates. The FOMC has also relied on forward guidance, that is, explicit statements about the expected path of the federal funds rate. Extensive evidence indicates that these policies have successfully lowered expectations about the future policy rate and longer-term interest rates (Williams 2011; Woodford 2012). However, the question of how much they have affected the uncertainty around policy expectations is open.

Researchers can estimate the financial market effects of these unconventional monetary policies by examining asset price movements around the time they were announced. This event study approach is far from perfect, but is straightforward to carry out and easy to interpret. In this analysis, announcements about the following Fed policy actions are considered: two large-scale asset purchase programs, commonly known as QE1 and QE2 for quantitative easing, announced in 2008 and 2010 respectively; the maturity extension program (MEP), often called Operation Twist, announced in 2011 (for a description, see Woodford 2012); forward guidance on August 9, 2011, and January 25, 2012, which made explicit that the FOMC anticipated exceptionally low levels of the federal funds rate at least until mid-2013 and late 2014 respectively; and the more recent policy announcement on September 13, 2012, when the FOMC announced further asset purchases and extended forward guidance to mid-2015. 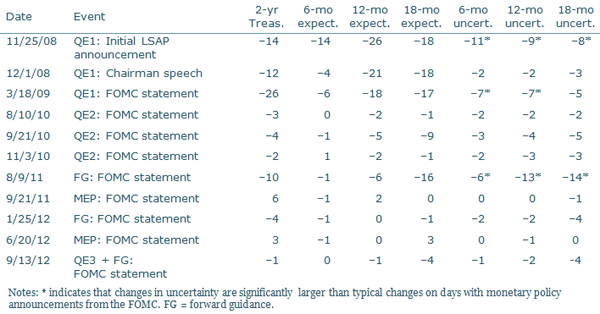 Table 1 shows changes on policy announcement days in hundredths of a percentage point in expectations for and uncertainty around the federal funds rate two, four, and six quarters ahead. The table also shows changes in the two-year Treasury note yield. Assuming that on these days nothing occurred to significantly change uncertainty about future financial market stress, movements in the uncertainty measures can be interpreted as changes in uncertainty about monetary policy. Decreases in uncertainty that were significantly larger than normally observed on policy announcement days are marked with asterisks.

The Fed’s forward guidance statements explicitly extended the expected duration of the period of exceptionally low short-term interest rates (see Swanson and Williams 2012). This explains the observed interest rate decreases. The first forward guidance announcement was an innovation in the Fed’s communication policy. It strongly affected interest rates and, importantly, substantially reduced policy uncertainty. Later forward guidance announcements had qualitatively similar effects, although they were concentrated at horizons beyond the 18-month period considered here. All told, the FOMC’s announcement both lowered the public’s expectations for the path of the federal funds rate and reduced uncertainty surrounding those expectations.

Financial derivatives provide important information about expectations for future asset prices and market uncertainty about those future prices. This information can be used to construct measures of uncertainty about the path of short-term interest rates and, by implication, future monetary policy. Recent Federal Reserve unconventional policy actions appear to have substantially affected this uncertainty by shifting the expected path of the federal funds rate and anchoring market expectations more tightly around this path.