Even in areas that have a common currency, economic conditions can vary greatly from one region to another. So a single uniform monetary policy may not be appropriate. For example, a simple monetary policy rule at times recommends different interest rates for different regions of the United States. Among euro-area countries, such a rule typically recommends an even greater divergence in interest rates, partly due to lower labor mobility, and less use of fiscal transfers to help smooth shocks.

A recent Economic Letter applied the well-known Taylor rule for determining the monetary policy interest rate to illustrate the economic divergence between core and peripheral European countries (Nechio 2011). The letter demonstrated that the European Central Bank’s (ECB) target rate closely resembled the policy rate predicted by the Taylor rule for the euro area as a whole. At the same time though, the Taylor rule indicated that substantially different rates were appropriate for core and peripheral European economies. That difference reflected large economic disparities among euro-area countries.

Similarly, economic conditions in the United States frequently differ from one region to another. Of course, in the face of free movement of financial assets throughout the country, the Federal Reserve must set a single policy rate for all 50 states. Thus, the same kinds of tensions over monetary policy that are found in a monetary union of many separate countries, such as the euro area, can appear in a single diverse country, such as the United States. This Economic Letter looks at U.S. monetary policy in the context of a Taylor rule. We apply a standard version of this rule to four separate U.S. regions and then compare the policy rates indicated by the rule with the Fed’s actual target rate path.

The Taylor rule is a policy guideline that generates predictions of a monetary authority’s policy interest rate for a given level of inflation and economic activity (Taylor 1993). According to one version of the rule, policy interest rates should respond to deviations of inflation from its preferred level and unemployment from its natural rate (Rudebusch 2010). A simple version of the rule is:

The target policy rate generated by the rule is a function of the inflation rate and the unemployment gap. That gap is defined as the difference between the measured unemployment rate and the natural rate, that is, the unemployment rate that would cause inflation neither to decelerate nor accelerate. Research shows that this rule or close approximations have predicted the policy course of several major central banks fairly well in recent years (see Taylor 1993 and Peersman and Smets 1999).

We apply the Taylor rule as shown above to the Census Bureau’s four U.S. regions: Northeast, Midwest, South, and West, comparing the region-specific target rates recommended by the rule with the Federal Reserve’s actual policy rate. We use headline inflation and measured rates of unemployment to construct Taylor-implied rates for each region. In Taylor rule exercises, researchers frequently use core inflation rates, which exclude energy and food prices. However, core inflation data are not available at the regional level. Natural rates of unemployment estimates are also not available by region. Instead, we use the Congressional Budget Office estimated natural rate for the entire United States to construct measures of regional unemployment gaps. The lack of regional natural rate estimates is potentially troublesome, as explained below. 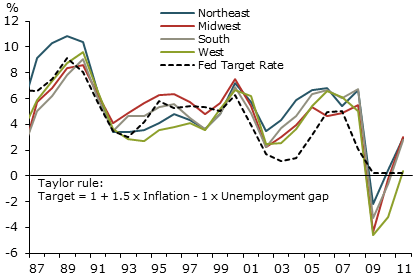 Figure 1 shows the policy rates predicted by the Taylor rule for the four U.S. census regions compared with the Fed’s target rate from 1987 to 2011. For example, at the end of 2011, the Taylor rule predicted policy rates ranging from 0.35% in the West to 3% in the Midwest, while the target federal funds rate was at 0–0.25%. The figure also shows that the dispersion of the regional Taylor rule implied rates has not been very large throughout the sample. Due to the financial crisis of 2008, the implied rates decreased substantially for all U.S. regions and dispersion across regions has increased since then. The bulk of the regional dispersion of the predicted rates stems from the differences in the sizes of the unemployment gaps across the four U.S. regions.

The relatively sizeable variation in unemployment gaps among U.S. regions may be the result of imposing a single natural unemployment rate across all parts of the country. In fact, structural differences among the four regional labor markets imply that each has its own natural rate, a distinction that is erased by using one national rate.
To test this, we constructed region-specific natural unemployment rates in two alternative ways: we first assumed that the rate for each region equals that region’s average unemployment rate across the whole sample period. Alternatively, we constructed the regional rates by adjusting the national rate for average differences between the national value and each of the regions. These two exercises reduce the regional dispersion in the Taylor rule predicted policy rates. But it does not qualitatively change the results, which suggests that assuming a single natural rate of unemployment across the United States is reasonable for the purposes of this letter.

Figure 2
Taylor rule in the euro area: Periphery vs. core 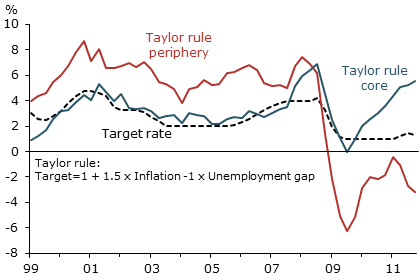 Dispersion among Taylor-implied regional policy rates in the United States is much smaller than the large discrepancies between core and peripheral countries in the euro area, as shown in Nechio (2011). Figure 2 reproduces a figure from Nechio (2011), but instead uses headline inflation to make it comparable to the U.S. regional data in this Letter. In the euro area in 2011, the Taylor rule predicted policy rates range from a negative 2% in the periphery to a positive 5% in the core. That’s more than twice as wide as the gap between Taylor rule predictions for U.S. regions. This gap becomes larger if we consider the alternative measures for regional natural rates of unemployment in the United States, as previously described. Under those two cases, the cross-region dispersion in the United States is smaller than the one shown in Figure 1. The euro-area discrepancy would still be larger if the exercise were done using core inflation instead of headline, or if Italy were placed among the peripheral countries.

One reason for the smaller divergence in the United States is its relatively larger factor mobility, in particular, its freer movement of labor. In addition, the United States operates under a single federal budgetary regime. By contrast, each European country has considerable leeway in determining its own fiscal policy.

If labor and capital can move freely across the nation, economic disparities cannot easily persist. If one region is hit by a negative economic shock and another region faces better growth prospects, unemployed workers in the slumping region can migrate to the economically stronger area. Such migration narrows the differences between the unemployment rates in the two regions.

Empirical labor market research has shown that regional disparities in unemployment rates are indeed much smaller in the United States than in Europe. Gáková and Dijkstra (2008) compare movements of working-age people, age 15–64, across U.S. regions with movements across euro-area countries. They find very limited movement of labor among euro-area countries, much less than labor movement across regions in the United States. What is more, the authors note that the share of working-age immigrants coming from outside the euro area is twice that of working-age immigrants who hold European Union (EU) citizenship. In an earlier paper, Obstfeld and Peri (1998) show that labor mobility is not only larger in the United States than in Europe, but also appears to be more responsive to unemployment.

More recent Current Population Survey data about internal migration in the United States show that the share of the population moving from one region to another has averaged 1% over the past ten years. Labor movement from one state to another has averaged 2%. Additionally, nearly half of interregional migration is for job-related purposes, such as losing a job, searching for work, getting a new job, or getting a job transfer. Although similar data are not available for the euro area, Gáková and Dijkstra (2008) found that only 0.14% of the EU working-age population migrated to another EU country in 2005–06. The relatively limited labor mobility in the EU can be explained by differences in culture, language, and labor legislation, and the fact that free movement of labor across the euro area is a relatively recent development.

The United States also uses fiscal policy to promote balance among regions. Obstfeld and Peri (1998) show that the United States relies heavily on fiscal transfers to offset region-specific shocks. By contrast, in the euro area, fiscal policy is an option that is not fully available because tax and spending decisions are largely sovereign. Nonetheless, the option of using fiscal tools would be especially helpful in addressing the problems of heavily indebted peripheral countries.

Applied to the four regions of the United States, this rule of thumb generates different policy rates. These divergent regional Taylor rule policy rates stem from differences in unemployment and inflation rates across regions. Such regional policy rate disparities in the United States are much smaller than the sizable disparities generated when the Taylor rule is applied to core and peripheral countries in the euro area.

The relatively greater regional balance in the United States can be attributed to higher labor mobility, which permits greater responsiveness to unemployment. By contrast, inside the euro area, cross-country labor movement is still very limited. In addition, the United States relies on fiscal transfers across regions to adjust for macroeconomic disparities, an option that is not fully available in the euro area.

Gáková, Zuzana, and Lewis Dijkstra. 2008. “Labour Mobility between the Regions of the EU-27 and a Comparison with the USA.” European Union Regional Policy 02/2008.