State, local, and federal fiscal policy in the United States has historically been countercyclical. Government spending as a share of gross domestic product generally rises during economic downturns and falls during expansions, while tax revenue does the opposite. Thus, the difference between government spending and revenue&—the combined state, local, and federal deficit&—tends to lean against business cycle fluctuations. This countercyclical feature of government fiscal policy arises in part through automatic stabilizers, that is, previously enacted programs that are designed to increase outlays during downturns and contract in expansions without explicit policy changes. For example, when the economy enters a downturn, government spending on safety net programs, such as Medicaid and unemployment insurance, increases because more Americans need financial assistance. At the same time, tax revenue falls as incomes, sales, and property values decline.

In addition to these automatic stabilizers, stimulus policies are often put in place during recessions, such as the $800 billion federal spending and tax package enacted in 2009. Thanks in large part to that package, federal fiscal policy is generally considered to have been more expansionary than in any downturn since the Great Depression.

However, state and local governments contracted sharply over this period as they slashed spending to balance budgets. Some researchers (for example, see Aizenman and Pasricha, 2011) have argued that state and local contraction roughly canceled out federal expansion, so that overall government fiscal policy was neutral. Others point to the large and growing aggregate state, local, and federal budget deficit as evidence that overall fiscal policy has been expansionary.

This Economic Letter examines the pattern of state, local, and federal fiscal policy since the start of the Great Recession to consider whether government spending and taxation have been more expansionary or less expansionary than would be expected, given the depth and duration of the downturn. We then use Congressional Budget Office (CBO) projections for the federal budget and economic growth to explore whether fiscal policy over the next few years is likely to be a headwind or tailwind for the economy.

To investigate the extent to which recent fiscal policy has been countercyclical and expansionary, we created a statistical model by estimating how federal, state, and local budgets have moved through past business cycles. Our analysis uses quarterly data since 1949 from the National Income and Product Accounts of the U.S. Commerce Department Bureau of Economic Analysis. We use historical fiscal patterns to predict what budgetary policy would have been in recent years based solely on business cycle factors, and then compare that prediction to actual policy. We measure the business cycle based on the difference between actual GDP and the CBO’s estimate of potential GDP, which is known as the output gap. This allows us to determine how expansionary current policy has been compared with fiscal policy’s typical countercyclical response, given the severity of the recent downturn.

One pattern independent of the business cycle is worth noting. State, local, and federal spending and tax revenue have both trended up as a share of GDP since 1949. Spending has grown faster than revenue, so the aggregate government deficit has also trended up. Our statistical model incorporates these long-run trends.

To understand the effect of fiscal policy on the economy, it is important to distinguish between the level of cyclically adjusted spending and taxes and their change. The rate of change is what affects economic growth, at least in the near-term. As noted, panel A shows that the level of federal spending as a share of GDP is higher than our model predicts. However, it has declined rapidly in the past year. The drop has been larger than would be expected based on historical patterns.

The drop in government saving both at the federal and aggregate levels was greater than would be expected based on typical cyclical factors. In other words, the current aggregate government deficit is larger than would be predicted given the output gap. However, the deficit has recently been shrinking faster than our statistical model would predict. Thus, the contribution to economic growth from state, local, and federal fiscal policy is less than would be expected given the weakness of the recovery.

Federal fiscal policy will increasingly weigh on economic growth in coming years, according to CBO projections. The CBO projects two possible paths for federal outlays and revenue, both of which would damp GDP growth. The more severe is its baseline scenario which assumes that federal fiscal policy in coming years will follow current law. This includes automatic spending cuts enacted in August 2011, and the expiration of the 2001 and 2003 tax cuts and several other tax provisions. These changes are generally scheduled to take effect at the end of 2012. They constitute what has been called a “fiscal cliff,” meaning that they represent a large and sudden contraction of the government budget. 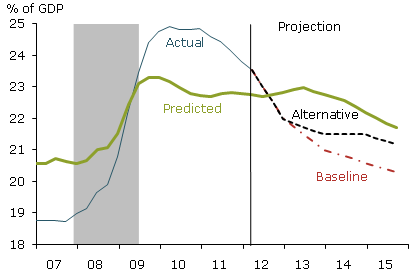 The CBO’s second scenario is milder, though still not benign for near-term economic growth. This alternative assumes current tax policies continue and that Congress will undo the sharp automatic spending cuts set to take place at the end of the year, but that discretionary spending caps passed in 2011 will stay in effect.

Figure 2, panel A compares both CBO projections of federal spending with the level predicted by our statistical model. Under either CBO scenario, spending over the remainder of 2012 is projected to fall faster than would be expected based on the pace of economic recovery. Beyond 2012, the CBO projects that under either scenario government spending will contract at least for the next decade roughly in line with our statistical model. The retrenchment in 2013 would be much sharper under the current-law baseline projection than under the CBO’s second scenario, in which automatic spending cuts are avoided.

Figure 2, panel B shows that, as spending falls and tax revenue rises, the federal deficit is expected to shrink over the next one to two years under either scenario, faster than would be predicted based on its historical pattern through the business cycle. In a continuation of the subpar pace of recovery from the Great Recession, the gap between actual GDP and potential output is expected to close very slowly over the next couple of years. The typical countercyclical pattern of federal fiscal policy would predict that the deficit would remain large longer than the CBO projects. Just how fast fiscal tightening occurs and how large the headwind to economic growth will be depend on future policy decisions. The deficit is projected to shrink much more quickly under the CBO’s baseline scenario. However, even under the milder alternative scenario, the shrinking deficit implies a headwind for GDP growth in the near term.

In aggregate, state, local, and federal fiscal policy was unusually expansionary during the Great Recession, but has since reversed course. Overall government spending and the combined state, local, and federal deficit have been declining over the past year more rapidly than would be expected given the slow pace of recovery and the typical countercyclical pattern of fiscal policy. Moreover, CBO projections suggest that fiscal policy, at least at the federal level, will become increasingly contractionary over the next couple of years compared with normal cyclical patterns. This suggests that the tailwinds fiscal policy provided to economic growth during the Great Recession and the first few years of recovery have shifted direction. Going forward, the forecast calls for fiscal headwinds.

Dan Wilson is a senior economist in the Economic Research Department of the Federal Reserve Bank of San Francisco.