The European sovereign debt crisis has created tensions in the global corporate debt market. Investors increasingly hold international assets and companies issue bonds in many countries. Thus, shocks to the European corporate bond market are readily transmitted to the U.S. corporate bond market. However, the rate of transmission is less than one-to-one. Moreover, different segments of the U.S. market vary in the magnitude of their response to European shocks. In particular, higher-rated nonfinancial borrowers and lower-rated financial borrowers are less affected on average.

The period since 2009 has been dubbed the second stage of the global financial crisis. Financial markets have been continually disturbed by concerns about European sovereign debt. Should market participants in the United States worry about European troubles then? One reason for concern is that capital markets have become much more integrated since the wave of financial globalization that started in the early 1990s (Lane and Milesi-Ferretti 2003). Today, U.S. markets are closely tied to those in Europe. Individual and institutional investors buy bonds issued by foreign companies, and U.S. and multinational corporations issue debt internationally. And, of course, the euro-area and U.S. economies are related through trade. For all these reasons, problems in Europe raise concerns for U.S. borrowers. Thus, developments in Europe may affect the cost of funding for U.S. companies.

It is important to differentiate between corporate and government bond markets. In particular, U.S. Treasury bonds have long played the role of a safe haven in the global debt market. When investors worldwide want to lower the risk profile of their portfolios, they substitute Treasury debt for riskier assets. As a result, yields on U.S. government debt tend to fall when spreads on the debt of other countries increase. On the other hand, corporate bond market spreads in countries can move together in moments of distress. This is particularly true for the United States and European countries because of close trade ties and a substantial degree of cross-country bank lending. Thus, increases in financing costs can easily be transmitted between the United States and Europe. 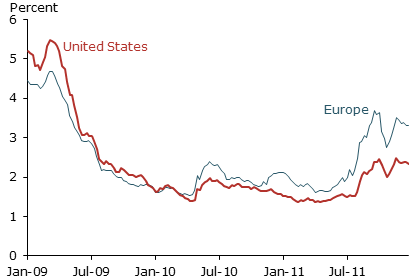 Corporate bond spreads provide a measure of the cost of credit for large companies. As economies start to recover from recessions, companies typically want greater access to credit markets so they can ramp up activity to satisfy growing consumer and business demand. The cost of this funding is vital to companies as they strive to expand their operations and maintain competitive prices. But, during times of financial turmoil, even companies with good fundamentals and strong growth potential may find it expensive to tap bond markets. This is why it is important to assess the vulnerability of the U.S. corporate bond market to European shocks.

Of course, not all U.S. and euro-area bond spread changes over the past three years were driven by European shocks. That makes it difficult to interpret the correlation in spreads as a measure of contagion from the European to the U.S. corporate bond market. The correlated movements of the two bond markets could result from shocks originating not in Europe, but in the United States or elsewhere in the world.

To refine our estimates, we analyze two sample subsets, which we refer to as “European news weeks” and “downgrade weeks.” We define European news weeks as Friday-to-Friday periods during which European corporate bond market spreads were highly volatile and one of two other conditions apply: either we can clearly identify bad news in Europe as the source of volatility or we don’t observe high volatility in U.S. corporate bond spreads. Table 1 shows the European news weeks identified based on these criteria. Downgrade weeks, shown in Table 2, are Friday-to-Friday periods in which Standard & Poor’s downgraded or put on negative credit watch the sovereign rating of at least one major European country.

Of course, the corporate bond market is not homogeneous. Corporate bond spreads vary by industry and credit rating. Thus, we also measure contagion on a disaggregated basis, separating borrowers by industry sector and credit rating. Using Bank of America/Merrill Lynch data from Bloomberg, we constructed spreads by subtracting 10-year generic government yields for the U.S. and Germany from the U.S. and euro-area corporate bond yield-to-maturity series, respectively. The indexes are available for several industry groups and credit ratings. We selected nonfinancial and financial borrowers, and ratings of AAA, AA, A, BBB. We computed weekly changes in spreads using end-of-trading-week values. 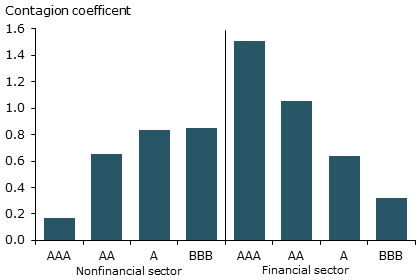 Figure 2 shows contagion coefficient estimates for these subgroups. The left panel presents results for nonfinancial issuers and the right panel for financial issuers. Both panels show contagion coefficients for the four different rating categories. The results indicate that the relationship between credit rating and vulnerability to European shocks is very different for financial and nonfinancial companies.

For the nonfinancial sector, contagion coefficients are higher for lower-rated bond issuers. In particular, bonds of AAA-rated nonfinancial U.S. issuers are significantly insulated from bond market funding shocks originating in Europe. The opposite is true for financial borrowers. The highest rated appear to be more susceptible to contagion from the European bond market. This may be because higher-rated financial institutions tend to be larger and more involved in global capital markets, which makes them more vulnerable to foreign financial market shocks. In fact, some of the AAA-rated banks are multinational institutions that issue bonds in both Europe and the United States, and are components of U.S. and euro-area AAA bond indexes. By contrast, highly rated nonfinancial companies tend not to rely much on foreign financing. Therefore, they are more likely to be insulated from financial shocks, especially those originating in foreign countries.

Elliot Marks is a research associate in the Economic Research Department of the Federal Reserve Bank of San Francisco.