The second round of Federal Reserve large-scale asset purchases, from November 2010 to June 2011, included regular purchases of Treasury inflation-protected securities, or TIPS. An analysis of liquidity premiums indicates that the functioning of the TIPS market and the related inflation swap market improved both on the days the Fed purchased TIPS and over the course of the LSAP program. Thus, TIPS purchases had liquidity benefits beyond the effect they may have had in reducing Treasury yields.

The success of the Fed’s large-scale asset purchases (LSAPs ) in reducing Treasury yields and mortgage rates seems well established. Several studies have found evidence that yields on longer-maturity Treasuries and other securities declined on days the Fed indicated it was planning to increase its holdings of longer-term securities (see Gagnon et al. 2011 and Hamilton and Wu 2011). Such announcements appear to influence market expectations about future monetary policy and are correlated with declines in risk premiums on longer-term debt securities.

In addition to the announcement effects, it’s also possible that Federal Reserve purchases of longer-term securities affect yields by increasing market liquidity, at least temporarily. In this Economic Letter, we focus on these purchase effects. Specifically, we analyze how the Fed’s second round of asset purchases, carried out from November 2010 through June 2011, affected the functioning of the market for Treasury inflation-protected securities (TIPS) and the related market for inflation swap contracts.

To perform our analysis, we take the sum of TIPS and inflation swap liquidity premiums identified in Christensen and Gillan (2011). These premiums are a good proxy for the functioning of the TIPS market apart from the effects asset purchase announcements have on market expectations about monetary policy. Our analysis shows that TIPS purchases significantly reduced the combined liquidity premiums in TIPS and inflation swaps. This suggests that the second LSAP program helped improve TIPS market functioning on purchase dates and throughout the program by reducing the liquidity premiums that investors would have demanded if the purchases hadn’t been conducted. 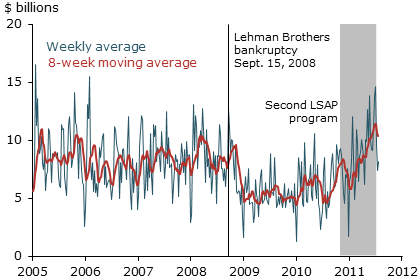 The program was implemented on a regular schedule. Once a month, the Fed publicly released a list of operation dates for the following 30-day period, indicating the relevant maturity range as well as the expected purchase amount for each operation. The Fed carried out TIPS purchases on 15 separate dates, fairly evenly distributed over time, with a stated goal of purchasing between $1–2 billion each time. TIPS were the only asset purchased on the specified dates and the Fed did not acquire TIPS outside of those dates. Finally, all outstanding TIPS with at least two years remaining to maturity were eligible for purchase, so there should not be any security-specific price movements on purchase dates based on the Fed’s announcements.

Figure 1 shows the weekly average and eight-week moving average of daily trading volume in the secondary TIPS market. Daily TIPS trading volume was averaging about $7–8 billion when the second LSAP program began. Some effect would be expected from the Fed’s injecting an additional $1–2 billion into this market approximately every two weeks. TIPS trading volume increased notably during the program. However, we are looking for the flow effects of the TIPS purchases rather than changes in trading volume. That is, we want to know what effects the purchases had on TIPS liquidity premiums, as well as liquidity premiums in the related market for inflation swap contracts, on the dates of TIPS purchases.

Our measure for the liquidity premiums embedded in TIPS yields and inflation swap rates derives from how swap rates vary from breakeven inflation, which is the difference between regular Treasury bond yields and TIPS yields of the same maturity. Breakeven inflation represents the level of inflation at which TIPS would deliver the same return as a regular Treasury bond of the same maturity. In an inflation swap contract, the counterparties exchange a fixed cash flow on a notional principal amount for a floating cash flow tied to the consumer price index (CPI). Such contracts allow debt market participants to transfer inflation risk. The counterparties in such swaps use TIPS and regular Treasury securities to hedge the contract’s floating component.

Figure 2
Sum of liquidity premiums in TIPS and inflation swaps 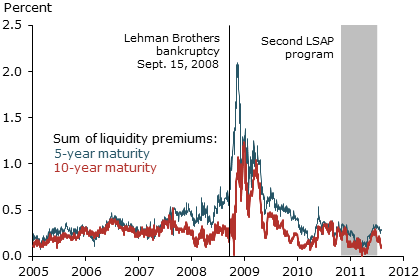 To determine how much this measure of liquidity was affected by the Fed’s LSAP program, we use four other liquidity measures as controls (see Figure 3). The first is the yield difference between a seasoned, or off-the-run, Treasury security and the most recently issued, or on-the-run, Treasury security of comparable maturity. For each maturity sector in the Treasury yield curve, the on-the-run security is typically the most traded and is therefore penalized least in terms of liquidity premiums. The second measure is the yield of AAA-rated U.S. industrial corporate bonds over comparable Treasury yields. As the credit risk component of such corporate bond yields is minimal, the yield spread largely reflects the premium for the lower trading volume and larger bid-ask spreads in the corporate bond market versus the highly liquid Treasury bond market. The third measure is the VIX options-implied volatility index, a widely used gauge of near-term market and economic uncertainty. The VIX index should capture uncertainty about the future resale price of a security and the liquidity premiums that investors demand to guard against such risk. Our fourth measure is the weekly average of the daily trading volume in the secondary TIPS market, as reported by the Federal Reserve Bank of New York. We use an eight-week moving average to smooth out short-term volatility. Increases in this measure should mean a lower combined liquidity premium because greater trading volume generally increases market liquidity. 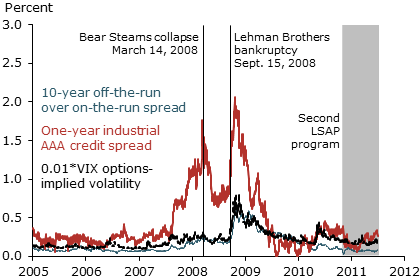 We use an event-study approach, which assesses the change in our combined liquidity measure on the purchase dates relative to nonpurchase dates using daily data from January 4, 2005, to June 30, 2011. To isolate the effect of the purchases from other market-driven changes in TIPS liquidity that might occur on purchase dates, we use the relationship between our combined liquidity measure and four other measures of bond liquidity as a control. Specifically, we look at the combined liquidity premiums in the TIPS and inflation swap market at the five- and ten-year maturity and examine the one-day response of our measure to each of the Fed’s TIPS operations. We also explore more persistent two- and three-day effects.

Our second exercise indicates that the average of our liquidity measure was about 0.05 to 0.07 percentage point (5 to 7 basis points) lower during the purchase program at the five- and ten-year maturity ranges than what would have been expected had the Fed not purchased any TIPS. The difference between the observed liquidity measure and our estimated hypothetical derived from pre-LSAP trends evolved fairly systematically throughout the program. Our measure of the combined liquidity premium declined relative to the case of no Fed purchases in the beginning months of the program, averaged between 0.10 and 0.15 percentage point (10 and 15 basis points) below the hypothetical during the middle of the program, and then towards the end increased back to the level at the program start. This suggests that, in addition to the one-day responses we find in the event study, the purchases seem to have reduced liquidity premiums in the TIPS and inflation swap markets over the duration of the program.

The second round of Federal Reserve LSAPs appears to have reduced the liquidity premiums in the market for TIPS and inflation swaps. Our measure of liquidity, based on breakeven inflation rates, improved on the days of Fed TIPS purchases. Moreover, the liquidity premium in the TIPS and inflation swaps market was persistently lower during the purchase program than what it would otherwise have been expected to be. This indicates the second LSAP program improved financial market functioning.