The adverse labor market effects of the Great Recession have intensified interest in policy efforts to spur job creation. The two most direct job creation policies are subsidies that go to workers and hiring credits that go to employers. Evidence indicates that worker subsidies are generally more effective at creating jobs. However, the unique circumstances of recovery from the Great Recession, especially the weak demand for labor, make hiring credits more effective in the short term.

The slow recovery of employment in the aftermath of the Great Recession has sharpened debate over policies to spur job creation. Policies for directly creating jobs include hiring credits, which are subsidies for employers to hire workers, and worker subsidies, which subsidize individuals to enter the labor market. Hiring credits effectively subsidize wages when employers hire. They increase demand for labor by lowering the cost of labor to employers. Worker subsidies raise worker earnings, thereby encouraging people to work.

Although economic theory predicts that both policies should lead to higher employment, evidence suggests that worker subsidies are more effective. However, drawing on Neumark (2011), this Economic Letter argues that unique circumstances of the recovery from the Great Recession—including weak labor demand and the widespread current unemployment—make hiring credits more effective in the short-term.

The major federal response to the job losses of the Great Recession was the American Recovery and Reinvestment Act (ARRA). At the state level, policies such as tax reductions, regulatory reform, tort reform, and infrastructure spending have been proposed or implemented. Most of these policies are indirect, and may or may not increase employment. In contrast, direct job creation policies explicitly subsidize employment increases. In the United States, the key worker subsidy is the Earned Income Tax Credit (EITC). For a family with two qualifying children, the EITC initially provides a 40% subsidy to earnings. The maximum benefit level is $5,236, which is eventually phased out through the taxation of additional earnings. EITC benefits are slightly larger for families with three or more children, smaller for families with one child, and meager for those without children.

Figure 1
The effects of worker subsidies 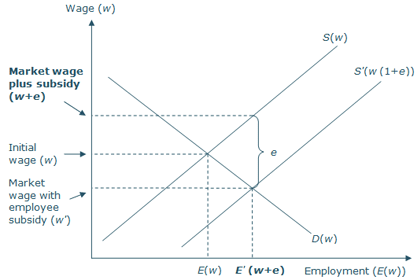 Note: The worker subsidy is denoted by e in the figure.

Figure 2
The effects of hiring credits 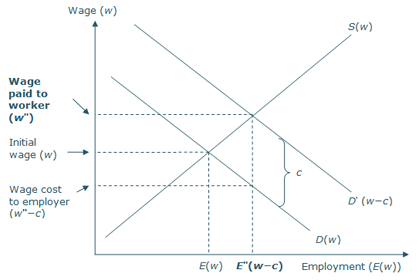 Note: The hiring credit is denoted by c in the figure.

The EITC should create jobs by encouraging people to enter the labor market. As shown in Figure 1, the worker subsidy (e in the figure) shifts the labor supply curve to the right. Since workers receive a subsidy from the government for working, more of them are willing to take jobs at any given market wage. At the new intersection of labor supply and labor demand, employment is higher. The market wage declines (from w to wʹ), which encourages employers to hire more workers. But the worker’s take-home wage is the market wage plus the subsidy, higher than the initial wage.

Most U.S. hiring credits have targeted particular groups of disadvantaged workers. By contrast, the 1977 federal New Jobs Tax Credit (NJTC) was noncategorical, targeting the entire labor force rather than particular groups. The NJTC also aimed to reward hiring that would not have otherwise taken place by paying the credit only to employers whose employee head count grew by more than 2%.

The 2010 Hiring Incentives to Restore Employment (HIRE) Act paid a fairly small credit for hiring in that year. It targeted individuals who were unemployed or entering employment from outside the labor force. But it did not explicitly target job creation by, for example, rewarding hiring only in growing businesses. The recently proposed American Jobs Act (AJA) attempts to subsidize hiring in two ways: exempting employers from the payroll tax for increases in payroll, whether via employment, hours, or wages; and providing a $4,000 credit for hiring those unemployed more than six months.

Effects of worker subsidies and hiring credits: Theory and reality

Economic theory predicts that both worker subsidies and hiring credits can increase employment. However, the practical problems of implementing these policies can undermine this result.

A potential problem with the EITC is that it creates disincentives to work for some recipients. The EITC unambiguously encourages some people not working to enter the labor market. However, for many of those already working, the EITC creates work disincentives by raising recipients’ incomes and perhaps also lowering their effective wages, thereby making work less attractive. Thus, the EITC creates incentives for some people to reduce their working hours. In families with multiple earners, the EITC can create incentives to exit the labor market.

Hiring credits present two complications (Dickert-Conlin and Holtz-Eakin 2000). First, a hiring credit may pay employers for hiring they would have done anyway. Estimates of the share of credits paid for hiring that would have occurred without the credit—referred to as windfalls—can exceed 90% (Bartik 2001). But efforts to substantially reduce windfalls by rewarding net job creation can lead to large administrative costs that make hiring credits less attractive to employers.

Second, hiring credits that target disadvantaged workers may stigmatize them. Eligibility for the credit may transmit a negative signal to employers that offsets the effect of the credit. In contrast, the EITC avoids stigma because employers typically do not know who is eligible.

What research has found

A number of researchers have found hiring credits targeting the disadvantaged to be quite ineffective. One problem is low utilization by employers, probably because of administrative costs and stigmatization of targeted beneficiaries. Another problem is large windfalls (Bartik 2001; Katz 1998). In addition, hiring credits do little to increase incomes of low-income families for two reasons: many low-wage jobs are taken by workers whose families are not low income; and many low-income families have no employed members (Dickert-Conlin and Holtz-Eakin 2000).

However, hiring credits used more generally to counter the business cycle may be more relevant in thinking about policy responses to the Great Recession. Research suggests that the NJTC, which had the goal of countering the business cycle, was more successful than other hiring credits. Its success probably came because it rewarded net employment increases and didn’t specifically target the disadvantaged. Perloff and Wachter (1979) found that employment growth was significantly higher among employers that knew about the NJTC, consistent with a beneficial effect of the credit. Bishop’s (1981) analysis suggests that the NJTC increased employment in construction, trucking, retail trade, and wholesale trade by about 0.5% of economywide employment, a sizable increase.

Firm conclusions about the impact of the NJTC require caution because it is hard to untangle policy effects from business cycle effects. Katz (1998) concludes that a “temporary, noncategorical, incremental employment subsidy has some potential for stimulating employment growth.” Moreover, using this evidence to justify an NJTC-type policy to counter the Great Recession requires extrapolating from the experience of the 1970s.

Studies of the EITC’s labor supply effects have found overwhelming evidence that a higher tax credit increases employment of single mothers, who generally have low employment rates. On the other hand, the EITC’s disincentive effects appear weak. For example, decreases in hours are modest at most for those already working (e.g., Eissa and Hoynes, 2004). And the EITC has the added benefit of raising incomes and earnings of low-income families.

Thus, in normal economic circumstances, using the EITC to create jobs confers four advantages. First, the EITC does not create stigma effects. Second, it is easy and inexpensive to administer. Third, worker subsidies such as the EITC do more to help low-income families. Fourth, there is clear evidence that the EITC increases employment.

Nonetheless, in the aftermath of the Great Recession, hiring credits are a more appropriate job creation policy. First, macroeconomic considerations appear to favor hiring credits. Figure 1 shows that the worker subsidy increases employment because the market wage paid by employers falls. But it seems likely that part of the reason for currently high unemployment is insufficient labor demand coupled with a nominal wage above the market-clearing level. In this situation, a higher EITC would result in more people looking for work without lowering the wage or increasing employment.

Second, recent proposals for hiring credits have been noncategorical, that is, focused on the unemployed defined broadly. With unemployment above 8%, eligibility for such a hiring credit would probably carry little stigma. Clearly, in the current downturn, many people have become unemployed through no fault of their own. Given anemic job growth during much of the recovery, basing eligibility simply on whether a business’s employment is growing might couple acceptable windfall costs with low administrative costs for employers.

What types of hiring credits are likely to be most effective at increasing overall employment? A hiring credit that is fully noncategorical, focused on the unemployed generally, would be more likely to avoid stigma. The 2010 HIRE Act, although not very generous, had such broad targeting. The recently proposed AJA in part targets the long-term unemployed. This raises the possibility of stigma effects. However, in the current environment, with over 40% of the unemployed reporting jobless spells of at least six months, restriction of the subsidy to this group may not stigmatize a worker.

An effective job creation hiring credit should create incentives for net new job creation. Neither the HIRE Act nor the AJA’s credit for the long-term unemployed has this feature. The AJA offers a payroll tax holiday provision for businesses that expand payrolls. This creates incentives for added jobs, if we assume that payroll expansions primarily occur as new hires rather than increased hours of work for existing employees. However, as currently structured, the AJA’s payroll tax holiday also applies to businesses that increase hours (or wages) without necessarily increasing head count. Labor supply on the employment margin is much more responsive to wages than labor supply on the hours margin. Therefore, a hiring credit focusing on employment would push out the labor demand curve along a flatter labor supply curve. That would generate a larger employment increase and a smaller wage increase. Thus, limiting the AJA’s payroll tax holiday to increases in employment would enhance the likelihood that it would create a substantial number of new jobs.

David Neumark is Chancellor’s Professor of Economics and director of the Center for Economics & Public Policy at the University of California, Irvine, and a visiting scholar at the Federal Reserve Bank of San Francisco.