Federal highway grants to states appear to boost economic activity in the short and medium term. The short-term effects appear to be due largely to increases in aggregate demand. Medium-term effects apparently reflect the increased productive capacity brought by improved roads. Overall, each dollar of federal highway grants received by a state raises that state’s annual economic output by at least two dollars, a relatively large multiplier.

Increasing government spending during periods of economic weakness to offset slower private-sector spending has long been an important policy tool. In particular, during the recent recession and slow recovery, federal officials put in place fiscal measures, including increased government spending, to boost economic growth and lower unemployment. One form of government spending that has received a lot of attention is public investment in infrastructure projects. The 2009 American Recovery and Reinvestment Act (ARRA) allocated $40 billion to the Department of Transportation for spending on the nation’s roads and other public infrastructure. Such public infrastructure investment harks back to the Great Depression, when programs such as the Works Progress Administration and the Tennessee Valley Authority were inaugurated.

One criticism of public infrastructure programs is that they take a long time to put in place and therefore are unlikely to be effective quickly enough to alleviate economic downturns. The fact is, though, that surprisingly little empirical information is available about the effect of public infrastructure investment on economic activity over the short and medium term.

This Economic Letter examines new research (Leduc and Wilson, forthcoming) on the dynamic effects of public investment in roads and highways on gross state product (GSP), the total economic output of a state. This research focuses on investment in roads and highways in part because it is the largest component of public infrastructure in the United States. Moreover, the procedures by which federal highway grants are distributed to states help us identify more precisely how transportation spending affects economic activity.

We find that unanticipated increases in highway spending have positive but temporary effects on GSP, both in the short and medium run. The short-run effect is consistent with a traditional Keynesian channel in which output increases because of a rise in aggregate demand, combined with slow-to-adjust prices. In contrast, the positive response of GSP over the medium run is in line with a supply-side effect due to an increase in the economy’s productive capacity.

We also assess how much bang each additional buck of highway spending creates by calculating the multiplier, that is, the magnitude of the effect of each dollar of infrastructure spending on economic activity. We find that the multiplier is at least two. In other words, for each dollar of federal highway grants received by a state, that state’s GSP rises by at least two dollars.

The federal government’s involvement in financing road construction goes back to the early part of the past century. Although initially small, this involvement became much more significant in 1956 with the enactment of the Federal-Aid Highway Act, which authorized almost $34 billion in 1956 dollars over 13 years for the construction of the Interstate Highway System. At the time, The New York Times noted that “the highway program will constitute a growing and ever-more-important share of the gross national product … (affecting) every phase of economic life in this country.”

The Interstate Highway System was completed in 1992. Since then, the federal government has continued to provide funding to states mostly through a series of grant programs collectively known as the Federal-Aid Highway Program (FAHP). The FAHP helps fund construction, maintenance, and other improvements on a wide range of public roads beyond the interstate highways. Local roads are often considered federal-aid highways and are eligible for federal funding, depending on how important the federal government judges them to be.

Because road projects typically take a long time to complete, advance knowledge of future funding sources can help smooth planning. Congress designs transportation legislation to minimize uncertainty. First, it enacts legislation that typically extends five to six years. Second, it apportions funds to states according to set formulas. Thus, a typical highway bill will specify an annual national amount for each highway program over the life of the legislation and spell out the formula by which that program’s national amount will be apportioned to states. Importantly, these formulas are based on road-related metrics measured several years earlier. That means that changes to current and future highway funding are not driven by current economic conditions.

Highway bills generally include information that helps states forecast relatively accurately the amount of grants they are likely to receive while the legislation is in effect. For the past two highway bills, the Federal Highway Administration (FHWA) published forecasts of each state’s annual future grants under each program.

Estimating the effects of road spending

We conduct a statistical analysis to estimate the effects of federal highway spending on state economic activity. Specifically, we construct a variable that captures revisions to forecasts of current and future highway grants to the states, based on information from highway bills since 1991. We closely follow, but also expand on, the FHWA’s methodology for forecasting each state’s future grants.

These forecast revisions serve as proxies for changes in expectations about current and future highway spending in a given state. In economic terms, these changes can be regarded as shocks, that is, unanticipated events that affect economic activity.

We study forecast revisions rather than changes in actual highway spending for two reasons. First, actual spending may both affect and be affected by current economic conditions, making it difficult to sort out the true causal effects of the spending.

Second, changes in actual spending are most likely to be anticipated years in advance. For that reason, some of their economic effects may be felt before the spending changes actually take place. For instance, a state government and other important players, such as construction and engineering firms, may decide to spend more today if they expect the state to receive more highway grants in the future. In this way, changes in expectations regarding future grants to the states may be important for current economic activity. Failing to account for changes in expectations may lead to incorrect conclusions about how government spending affects economic activity (see Ramey 2011a). 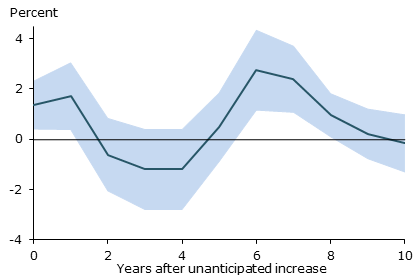 In our analysis of how changes in forecasts of highway grants to the states affect state GSP, we control for lags in state GSP, lags in receipt of highway grants, average state GSP levels, and national movements of gross domestic product (GDP) over the sample period from 1990 to 2010.

In Figure 1, the solid line shows the average percentage change in a state’s GSP following a 1% increase in forecasted future highway grants to the states. The shaded area around the line represents a 90% probability range. The horizontal axis indicates the number of years after the unanticipated change in forecasted highway grants to the states. The figure shows that changes in the forecasts have a significant short-term effect on state output in the first one to two years. This effect fades, but then increases sharply six to eight years after the forecast revisions, before declining again. This pattern holds up well with alternative estimation techniques, the inclusion of different control variables, and with different data samples.

This pattern is consistent with New Keynesian theoretical models in which public infrastructure, such as roads, are used by the private sector in the production of goods and services and take time to be built (see Leduc and Wilson, forthcoming). In this framework, the initial impact is due to a traditional Keynesian effect of an increase in aggregate demand. The medium-term effect on output arises once the public infrastructure is built, thus increasing the economy’s productive capacity.

Based on the results shown in Figure 1, we find that multipliers for federal highway spending are large. On initial impact, the multipliers range from 1.5 to 3, depending on the method for calculating the multiplier. In the medium run, the multipliers can be as high as eight. Over a 10-year horizon, our results imply an average highway grants multiplier of about two.

Our estimated multipliers are noticeably larger than those typically found in the literature on the effects of government spending. For instance, in a recent survey, Valerie Ramey reports multipliers between 0.5 and 1.5 (see Ramey 2011b). One possible reason for the wide differences is that we consider a very different form of government spending. Most of the literature concentrates on the multiplier effect of military spending. But such spending is arguably nonproductive in an economic sense. By contrast, government investment in infrastructure, such as roads, can raise the economy’s productive capacity. In that respect, it can have a higher fiscal multiplier. Another difference is that we concentrate on the multiplier effect on GSP, while the literature typically studies the effect on U.S. GDP as a whole.

The American Recovery and Reinvestment Act

The deep recession of 2007–09 led to the enactment of ARRA, which included a large one-time increase of $27.5 billion in federal highway grants to states. ARRA was designed to have strong short-term effects. In general, infrastructure projects are not viewed as effective forms of short-term stimulus because of the long lags between authorization, planning, and implementation. By the time the projects get under way, a recession may be over. The extra spending could ultimately end up feeding an already booming economy. To address this problem, ARRA stipulated that state governments had to fully use their share of federal highway grants by March 2010.

It is conceivable that highway spending during a major downturn, when productive capacity is underutilized, may affect output in a substantially different way than spending during more normal times. To test this, we examined whether unanticipated changes in highway spending in 2009 and 2010 had a different effect on GSP than in other years in our sample. We found that spending in 2009 and 2010 was roughly four times as large as the peak response shown in Figure 1. This suggests that highway spending can be effective during periods of very high economic slack, particularly when spending is structured to reduce the usual implementation lags.

Surprise increases in federal investment in roads and highways appear to have had positive effects on gross state product in both the short and medium run. The short-run impact is akin to the traditional Keynesian effect that stems from an increase in aggregate demand. By contrast, the positive impact on GSP in the medium run is probably due to supply-side effects that boost the economy’s productive capacity. Infrastructure investment gets a good bang for the buck in the sense that fiscal multipliers—the dollar of increased output for each dollar of spending—are large.

Daniel Wilson is a senior economist in the Economic Research Department of the Federal Reserve Bank of San Francisco.