The collapse of the housing market and the high default rates on residential mortgages in recent years suggest that bubble conditions distorted borrower decisions about mortgage financing. This Economic Letter examines the relationship of housing market conditions during the boom to buyer choices between fixed-rate and adjustable-rate mortgages.

Our analysis indicates that the pace of house price appreciation had a significant impact on mortgage choice in high-appreciation markets compared with other markets. In high-appreciation markets, the pace of house price gains was strongly linked to the popularity of adjustable-rate mortgages. But, in other markets, changes in house prices had no effect on mortgage choice. These results are consistent with research showing that higher house price appreciation leads to terms on adjustable-rate mortgages that can be relatively attractive to some borrowers and that financially constrained borrowers tend to prefer such loans.

Margins on mortgage interest rates and general financial market conditions have traditionally been important determinants of mortgage financing choice. However, we find that the effects of some of these fundamental factors were muted in markets with high house price appreciation compared with other markets. These findings may partly reflect that homebuyers in high-appreciation markets expected to hold their loans only briefly before refinancing. Still, they also provide some evidence that bubble-like conditions can dilute the impact of fundamentals on economic choices. 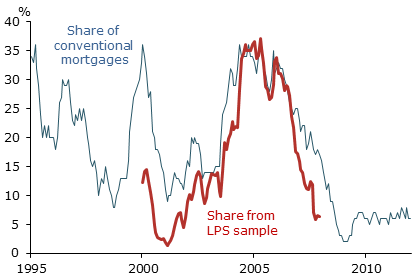 The choice of what kind of mortgage to take out is a critical decision in buying a home. Broadly, mortgage loans come in two types: fixed-rate (FRMs) and adjustable-rate (ARMs). In a basic ARM, the initial rate is set as a markup, or a margin, on top of a benchmark, such as the one-year U.S. Treasury rate. ARM interest rates typically adjust periodically according to changes in the benchmark. During the recent housing boom, hybrid ARMs were popular. In these, the rate is typically fixed for two to five years and then adjusted periodically. Option ARMs, in which the borrower chooses among several monthly payment options, were also common.

FRMs have been the most popular loan choice in the United States, although the mix has fluctuated significantly. In Figure 1, the thin blue line shows the ARM share of all conventional mortgages reported by Freddie Mac. The thick red line shows the ARM share of mortgages in a random sample of first-lien loans drawn from an LPS Applied Analytics database used in our analysis. Both series show that ARMs became more popular during the housing boom, especially during the years of peak house price appreciation. 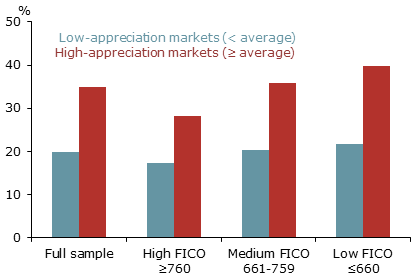 We define a mortgage to be in a high-appreciation market if the two-year change in the CoreLogic Home Price Index prior to loan origination was greater than 20%. Otherwise the loan is classified as being in a low-appreciation market. Figure 2 shows that, from 2000 to 2007, ARM shares were notably higher in high- appreciation markets and among borrowers with lower credit ratings.

Previous research has shown that interest rates on FRMs and ARMs are key determinants of mortgage financing choice. The mortgage rates a lender sets will depend on underlying market conditions and other factors. FRM interest rates are linked to other long-term interest rates, such as the yield on 10-year U.S. Treasury securities. These in turn reflect expected risk-free short-term rates plus a term premium. The term premium represents the compensation investors require to have their funds locked up for a longer period instead of being put into a series of shorter-term instruments.

FRM pricing also includes a markup for credit risk. Credit risk is a lender’s risk of loss if a borrower defaults. Borrower characteristics such as credit history and income have been shown to be predictors of default. The margin on a FRM also is related to conditions such as expected house price appreciation and house price volatility. In addition, noninterest loan features such as prepayment provisions and loan size relative to real estate value affect the margin.

As noted earlier, the interest rate on a simple ARM is based on a benchmark, such as the yield on a one-year U.S. Treasury security, plus a margin. The expected ARM rate reflects the benchmark’s expected value over the loan’s expected duration, plus the margin. In contrast to FRMs, ARM rates include little or no term premium because an adjustable-rate loan is like holding a series of short-term instruments. The interest rate changes periodically according to market conditions. In addition, Elliehausen and Hwang (2010) show that, unlike FRM margins, ARM margins reflect expected lender losses stemming from the higher default risk associated with the interest rate volatility of these loans.

Given the determinants of mortgage rates, a profit-maximizing lender should set FRM and ARM interest rates and noninterest rate terms so that expected profits are equal. However, individual borrowers are not necessarily indifferent to the two loan types. For example, Campbell and Cocco (2003) find that borrowers who are more likely to move would favor ARMs. So too would financially constrained borrowers with low risk aversion. It makes sense intuitively that, if there is a positive term premium or if short-term interest rates are expected to increase, a borrower expecting to move or refinance in a few years would tend to favor an ARM. More generally in these circumstances, an ARM would tend to have a lower initial rate compared with an otherwise similar FRM. The initial lower rate could make it easier for constrained borrowers to qualify for mortgages. For their part, option ARMs may be especially attractive to borrowers with incomes that vary from year to year.

Housing market conditions also could affect borrower mortgage choices. For example, rapid house price increases could spur demand for homeownership. At the same time, such house price increases may make it easier for financially constrained borrowers to get credit, to the extent that lenders ease down-payment requirements. This could cause a change in the kinds of borrowers who choose ARMs. Indeed, Doms and Krainer (2007) show that the rise in homeownership rates during the housing boom was most notable among demographic groups that are traditionally cash constrained.

Differences in the pace of house price appreciation across markets may have also altered the sensitivity of mortgage choice to the financial market metrics, such as the term premium, and to margins on ARMs and FRMs. For example, Barlevy and Fisher (2011) present evidence that the recent housing boom and bust was associated with a speculative bubble. They show that, in a housing bubble, decisions about buying real estate and choice of financing could be less systematically linked to fundamentals such as mortgage pricing. 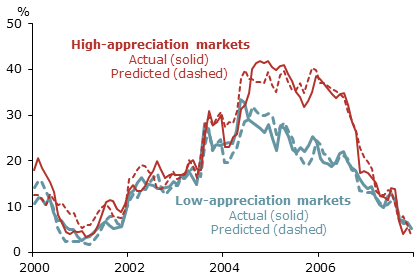 To examine how rising house prices affect mortgage choice, we use LPS data to derive a random sample of 6.6 million first-lien mortgage originations from 2000 to 2007. We create a model that allows three basic choices: an FRM, a non-option ARM, and an option ARM. We make separate estimates for home purchases and mortgage refinancing. In the model, the key determinants of mortgage choice are financial and housing market conditions, and mortgage markups. Financial market metrics include a measure of the term premium, a measure of the slope of expected short-term interest rates, and interest rate volatility. The model also includes measures of the average FRM markup based on the interest rate spread between a 30-year fixed-rate conventional mortgage and the 10-year Treasury yield. The ARM markup is based on the spread between the average ARM interest rate and the one-year Treasury yield. House price appreciation is measured as the two-year percentage change in the CoreLogic Home Price Index for the county in which the home is located. House price volatility is measured as the variation in the monthly percentage change in the corresponding county-level CoreLogic index over the two years before a loan’s closing date. The model includes controls for loan terms such as loan-to-value ratio, borrower characteristics such as credit score, and year-specific effects. 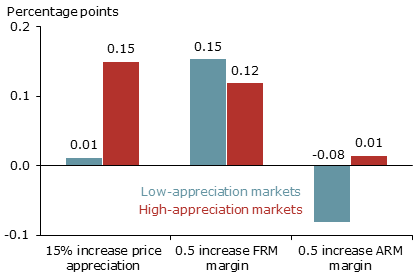 During the housing boom, a shift took place in borrower mortgage choice, with borrowers increasingly opting for ARMs instead of FRMs. The increase in ARM shares was most pronounced in markets where house prices rose rapidly. In such markets, house price gains were strongly correlated with a rising ARMs share for home purchases. Moreover, in high-appreciation markets, the effects of fundamentals such as mortgage interest rate margins were muted. This muting effect was most apparent in ARM margins, that is, the interest rate spread between ARMs and short-term Treasury yields.

Yelena Takhtamanova is an economist in the Economic Research and Public Information Departments of the Federal Reserve Bank of San Francisco.