States use a variety of strategies to encourage economic growth, including policies that limit tax and regulatory burdens, or support education and infrastructure development. In contrast, policies that promote equity, or protect workers or the environment are often said to discourage economic growth, impose costs on businesses, or reduce incentives to work. The counterargument is that these policies could promote growth by improving quality of life and making states more attractive to businesses and workers.

The relationship between government policies and economic growth is often couched in terms of the “business climate.” Advocates of reduced taxes and regulation often point to business climate indexes that assign poor ranks to states with higher taxes and stronger regulations. However, business climate indexes can provide inconsistent views of state policy environments. States ranked poorly on taxes may get high marks in other areas, such as education or human capital, or quality-of-life measures, such as crime and health.

Contradictory rankings could mean that a state’s business climate has many dimensions, which no single index captures fully. Alternatively, it could mean that some or all business climate indexes miss the particular state policies that are genuinely important for economic growth. This Economic Letter draws on recent research (Kolko, Neumark, and Cuellar Mejia, forthcoming) to answer three questions about state business climate indexes: What information do they capture? Which indexes predict economic growth? And what does this say about state policies that best promote growth?

We look at a number of long-standing state business climate indexes that make their methods transparent by listing index components. These indexes emphasize different sets of policies and differ significantly in how they rank states.

Of the 10 indexes we consider here, five stress factors related to productivity, such as human capital, infrastructure, and business incubation; and quality-of-life policies, such as crime and health insurance. Some of them are created by organizations focused on technology, the “new economy,” and entrepreneurship, such as the Information Technology and Innovation Foundation and the Kauffman Foundation. Other indexes in this group, such as those of the Corporation for Enterprise Development, emphasize quality-of-life issues and the dynamism of the small business sector. We label these five as “productivity/quality-of-life” indexes.

The remaining five indexes emphasize tax burdens, nontax costs of doing business, size of government, regulation, litigation, welfare, and other transfer payments. We refer to these as “tax-and-cost” indexes. (For details on the indexes, see Kolko, Neumark, and Cuellar Mejia 2011.)

Some of these indexes are products of organizations with specific policy agendas. Their indexes may not focus on factors that genuinely predict economic growth. For example, the Economic Freedom Index is created by the Pacific Research Institute, which describes its mission as “advancing free-market policy solutions.” For its part, the Corporation for Enterprise Development describes itself as “[d]riven to create a more robust, fair and sustainable economy … fueled by the belief that there is a tremendous amount of untapped potential in low-income people and distressed communities.” Of course, an organization with a policy agenda can still create an index that provides valuable information about state policies that affect economic growth.

Our two types of indexes capture distinct sets of policies. Averaged over time, the five indexes in each index type are highly correlated with each other, but generally not correlated with indexes of the other type. In statistical analysis, correlations measure the strength of the simple relationship between two variables. They range from a minimum of –1, which is strongly negatively correlated, to a maximum of 1, which is strongly positively correlated. Among the five productivity indexes, the correlations range from 0.31 to 0.77, with most of the correlations higher than 0.5. Similarly, the correlations among the tax-and-cost indexes range from 0.25 to 0.79, with the majority greater than 0.5. On the other hand, the correlations are often near zero or negative between productivity and tax-and-cost indexes. This suggests that, for the most part, the two index types capture distinct clusters of policies.

Do these inconsistent rankings mean that all state business climate indexes are arbitrary and uninformative? Or do certain types of indexes capture policies that matter more for economic growth?

We answer this by looking at the historical relationship between state business climate indexes and economic growth (see Kolko, Neumark, and Cuellar Mejia, forthcoming). We use a variety of statistical models relating economic growth to the business climate indexes. These indexes average across many policies and change slowly over time. As a result, the model estimates reveal the longer-run associations between state differences in business climate indexes and economic growth. We consider multiple measures of growth, but emphasize employment, based on data from the U.S. Bureau of Labor Statistics Quarterly Census of Employment and Wages. We also consider gross state product, or GSP, the state equivalent of gross domestic product, reported by the U.S. Commerce Department’s Bureau of Economic Analysis.

The statistical models also take into account other factors. They use annual state data from 1992 through 2008, and factor in regional differences that have no direct relationship with policy but can influence growth. Among these are weather, including temperature and rainfall; proximity to the nearest coast, Great Lake, or major river; and population density. Some of the models also control for Census regions.

In addition, states can grow at different rates solely because of their industry mix. For example, California’s strong economic growth during the late 1990s may have reflected an overrepresentation of the information technology sector, which boomed nationally, but disproportionately benefited California. Alternatively, the tech sector may have expanded more rapidly in California in the 1990s than it did elsewhere, which could be related to policy. A variable capturing growth due solely to industry mix—whether a state benefited from national trends in its key industries—is included to net out the first possibility.

In contrast, the estimated statistical relationships between the productivity/quality-of-life indexes and employment or gross state product growth are usually near zero and, if anything, tend to be negative. Thus, our models suggest that states with higher tax-and-cost index rankings have faster employment growth. But there is no systematic relationship between the productivity/quality-of-life indexes and growth. Based on tax-and-cost index rankings, the state business climate makes the most negative estimated contribution to employment growth in New York, California, and Rhode Island, and the most positive contribution in Nevada, Wyoming, and South Dakota.

Figure 1
Effects of policy and nonpolicy factors on growth 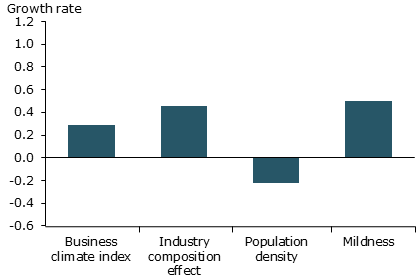 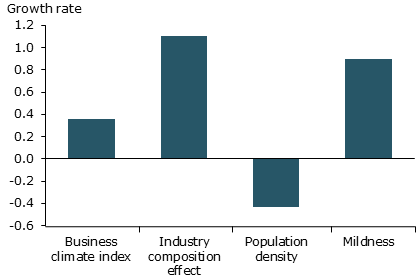 Note: Average estimated effects on growth rates of changes from 40th to 10th position in rankings of index components.

Industries that are not tied to local markets or dependent on local natural resources may be more sensitive to differences in state business climates. We classify sectors based on differences in rates of job creation and destruction stemming from interstate relocation. The most geographically mobile are manufacturing, information, finance and insurance, and professional and technical services (Kolko and Neumark 2007). When we plugged these industries into our models, we found evidence that the relationship between the tax-and-cost indexes and growth is stronger for manufacturing than for overall employment. However, there is not much difference for the other three footloose sectors.

Although we found that policies associated with a higher ranking on the tax-and-cost indexes—lower taxes and costs of doing business—lead to faster economic growth, the role of these policies should not be overstated. Figure 1 shows that some nonpolicy factors appear to have much stronger relationships with economic growth than the policies captured in the tax-and-cost indexes. Closer inspection of the data highlights differences across groups of states in these nonpolicy areas. Mild weather and low population density correlate with faster employment and economic growth. Nevada, Arizona, and New Mexico, which have milder, drier weather and lower population density, have the most favorable set of nonpolicy factors.

A detailed analysis of the tax-and-cost indexes identifies two policies as particularly important for growth. First, corporate tax simplicity and uniformity with federal taxation are associated with stronger wage and gross state product growth. Second, states with higher welfare and transfer payments show weaker employment and wage growth. This makes sense according to economic theory. A complicated tax structure, including many corporate tax credits, increases the cost of compliance and creates economic distortions. And welfare and transfer payments can create work disincentives.

These findings shouldn’t be taken to mean that progrowth policies are always good public policy. Some policies that could dampen economic growth—such as welfare and transfer payments—might promote other goals, such as equity. Tax credits can foster socially beneficial behavior, such as energy conservation. Policymaking inevitably involves trade-offs between vital, but sometimes contradictory, social goals. Growth is not the only criterion for evaluating a state’s economic performance. Still, economic growth can’t be ignored since it is the long-run source of the resources that society can use to pursue its other goals. healthy banks also said they took great care and spent significant time underwriting loans and monitoring credit quality.

David Neumark is a professor of economics and director of the Center for Economics & Public Policy at the University of California, Irvine, and a visiting scholar at the Federal Reserve Bank of San Francisco.